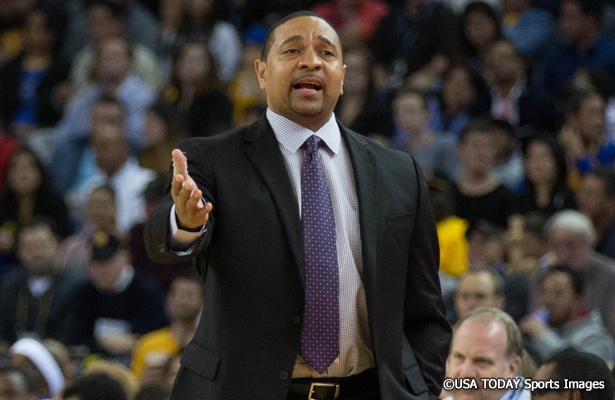 Once again, Warriors management has decided not to publicly support Jackson. That trend isn’t lost on a few players who staunchly supports their coach. A few players expressed the dismay at the lack of favor Jackson has despite the success he’s enjoyed the last two seasons. They see that Jackson simply had the final of his year picked up and was not given his extension. They took note when co-owner Joe Lacob told Tim Kawakami he was disappointed and had some concerns about Jackson. And while Jackson has been constantly under attack, they’ve noticed no one has come out to Jackson’s defense.

Multiple players have told me they get the sense Jackson could end up leaving – whether it is by Jackson’s choice or management’s. Whether these divisive undercurrents are problematic remains to be seen.

via Marcus Thompson of the Mercury News

This isn’t the first credible report to suggest that Mark Jackson could be out as the Golden State Warriors’ head coach after this season.

Adrian Wojnarowski of Yahoo! Sports also wrote about the dysfunction in Golden State and the uncertainty of Jackson’s future recently.

The fact that the organization hasn’t stood by Jackson is telling, as Thompson points out. The franchise seems to be concerned that Jackson has now had issues with several assistant head coaches on his staff, first Mike Malone and now Brian Scalabrine.

It also doesn’t help that the Warriors have failed to live up to lofty expectations this season, sitting at 44-27 and in the Western Conference’s sixth seed despite splurging for Andre Iguodala over the offseason.

Young Was Open to Spurs Trade

He said was aware of the rumors that had him being traded to the Spurs (Young and Duncan share the same agent). Young said he would have embraced the move, as winning is the only thing on his mind.

“You know, it’s a great opportunity,” Young said. “I’m one of those guys that just want to win. … We play the game and make a lot of money, but this is our career and me personally, I want to win. I want to play for a winning team, I want to win a championship. … At the end day, right now, the trade deadline is over and I’m just trying to develop guys and rebuild the culture.”

Asked if he’s thought about this offseason, and the possibility that he name will again surface in trade rumors, Young said he hasn’t thought about it.

But when he was asked again about joining Leonard in San Antonio, he smiled saying: “It can happen. Like I said, I can play with anybody.”

via Jabari Young of MySanAntonio.com

At this point, Thaddeus Young would likely be open to any trade, since his situation can’t get much worse. He’s one of the few Philadelphia 76ers who actually belong in the NBA, and the team is clearly tanking as they try to secure ping pong balls for the 2014 NBA Draft Lottery. Philadelphia has lost 25 games in a row, one shy of an NBA record, and the 25-year-old veteran has had to withstand it.

Going from Philadelphia to San Antonio would be a dream come true for Young. He’d go from bottom feeder to contender overnight, and he would have a chance to compete for a championship with Spurs.

This is Young’s seventh season in the NBA and he has experienced success, going to the postseason four times. He doesn’t want to stick around while the 76ers gut their team and rack up losses.

Young is under contract next season for $9,410,869 and then can exercise his early termination option the following summer to test free agency.

Jackson a Fan of Shumpert

According to a source, Knicks president Phil Jackson likes Shumpert because he’s defensive-minded and selfless.

This is excellent news for Shumpert, who has heard his name in trade rumors a lot since being drafted by the New York Knicks in 2011.

Because the 23-year-old was one of New York’s few young (and attractive) assets, Shumpert was shopped and nearly traded several times, the most recent being a potential deal with the Oklahoma City Thunder prior to this year’s trade deadline.

Now, it appears Shumpert has some security moving forward. James Dolan and others have made it clear that Phil Jackson will make all of the basketball decisions in New York and have complete say over personnel. If Jackson is a fan of Shumpert, it’s safe to say he’ll be staying with the Knicks.

This season, Shumpert has averaged 6.7 points, 4.2 rebounds and 1.8 assists in 26.4 minutes per game. There has been some debate over whether head coach Mike Woodson has been using Shumpert correctly this season.