Home » news » Nba Sunday How Far Will The Clippers Go

DeAndre Jordan looked at me and smirked and quickly, his eyes rolled upward as he thought about his response.

“What are this team’s goals for this year?” I had asked him.

And after two seconds of silence, in a tone that was matter-of-fact and cool, Jordan responded with the most non-controversial answer possible.

“To be better than we were last year,” he said.

Still a work in progress, through 24 games, the Los Angeles Clippers are a mediocre 14-10. Integrating nine new faces is a challenging endeavor, but no more challenging than having to play through an entire 82-game regular season before having the opportunity to return to the scene of a crime.

With one thing on their mind—redemption—Doc Rivers and his team are doing their best to block out the background noise and keep their energies focused within.

With legacies and their very futures hanging in the balance, one could easily argue that the Clippers are under the most pressure of any Western Conference team this season since anything short of a championship will likely spell major changes.

Just don’t expect them to admit it.

“We’ve added nine new guys,” DeAndre Jordan said. “Our starting lineups are different, but everyone has played in the league before, we’ve got a lot of smart guys on the team so the more and more we can get reps added and be good at it, then the better off we’ll be,” he said, referring to the platoon of new faces brought in.

“It’s tough,” he said when asked about the difficulty of integrating so many new pieces. “The starting lineup is mixing up, I think we’re settling in a little bit with Luc [Mbah a Moute], but with our second unit, there’s so many guys who are capable of having a big night every night—Austin, Jamal, Lance, Josh, Wes, Paul, whoever—we just gotta continue to learn how to play with each other with that unit and guys mixed in with the first unit,” he said.

“But I think we’ll be okay, we have a lot of experienced guys, so guys know how to play together.”

Under normal circumstances, in the Western Conference, a 14-10 record isn’t anything to be upbeat about. Despite it, though, the Clippers will enter play on December 13 as the fourth seed. That is a far cry from years past and may be indicative of newly found parity.

“Our offense hasn’t scratched, to me, where we should go. I know we’re in the top three or four, but to me, we’re a way better offensive team than we’ve played. But if we keep playing defense, it will make us a better offensive team. We’ll get multiple stops, we’ll get transition buckets, so I think our guys, finally, are starting to understand the importance of that and I think that’s good,” he said.

“We’ve been inconsistent. Our defense is really improving and if we keep on this track, we’re gonna be where we think we should be.”

And the better question would be just where the Clippers think they should be.

If you ask, nobody will tell you, because Rivers, like he did in Boston, has taught his players to not allow external forces or pressure to enter their locker room. There is no advantage to publicly admitting that the Clippers are under tremendous pressure to produce something substantial this season or that the group is collectively haunted by the squandering of a 3-1 series lead to the Houston Rockets.

Soon enough, we will see if the Clippers can arrive at their preferred destination.

Chris Paul is overrated. Blake Griffin hasn’t improved. Doc Rivers needs to leave the bench and paying DeAndre Jordan a maximum-salaried contract when he can’t be depended on to make a pair of free-throws in a tight game was an asinine decision.

At least, those are some of the storylines and narratives that have been told of these Clippers since last Spring’s debacle.

Jovial and personable, their personalities belie their competitive nature. Paul is widely considered to be one of the “nice” guys in the NBA, but his reputation as a competitor amongst his peers is anything but.

Deep down, the entire team believes that if they had an opportunity to square off against the Warriors in last season’s playoffs, they would have beaten them. And if things broke differently, the Clippers believe that it would have been them beginning the 2015-16 NBA season as the defending champions.

Instead, what you seem to have is a group of men who trust nobody but themselves and a team who has clearly been instructed by its head coach to not engage in any sort of hyperbole or back-and-forth in the media about what this team’s goals and aspirations are.

“I’m not really into giving grades,” Blake Griffin told me when I asked to assess, by grade, his team’s performance over the early goings of the season. “That’s for everybody else,” he dismissively said 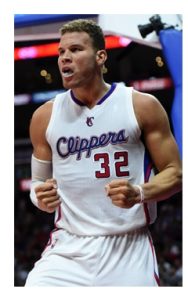 as he walked away from me.

Playfully, he claimed that I was trying to put words into his mouth.

Having spent considerable time around Rivers over the course of his nine years as the head coach of the Boston Celtics, I know a thing or two about him, his edict and his philosophy. Doc believes that pressure is an outside force that must be let in. The media, he would tell his players, are going to say all kinds of things about who they are and who they should be and what the rightful expectations of them should be. If you buy into what others say and think about you, you’ve bought into the pressure and sometimes, attempting to live up to it can be tantamount to allowing external forces to impact a process that should be wholly internal and organic.

In other words: there is no reason to tell anyone that the goal is a championship. Let your play do the talking. Dare to be great because you want to be great, not because other people think that you should be great.

Hanging around Doc Rivers and his team for an evening, it was easy to see right through all the attitude, cliche responses and boxed answers that his players gave when asked legitimate questions.

Having been around the game for a long time and having observed a fair number of champions and championship-caliber players, one thing I know is that the Clippers have the fire, they have the talent, they have the coach, and now, after last season’s heartbreak, they have the haunting memory that is usually a precursor to finding success at the highest level. And their obvious and intentional avoiding of saying “championship” is an edict from Doc to avoid external distractions.

In the spring, after the Clippers have enjoyed a long win streak after the All-Star Break and finish with a top-four seed in the Western Conference, realize and understand, for them, the entire season was the appetizer. The main course is an opportunity to exorcise the demons that have haunted them since James Harden walked off of the floor at the Toyota Center with a date against the Warriors.

The Clippers the entire meal.

What happens if they come up short again? Does River consider removing himself from the bench the way Pat Riley in Miami did after the 2007-08 season? Would Chris Paul begin contemplating life in another uniform?

Would the Clippers have to admit defeat and admit that they will never be able to surpass the Golden State Warriors and San Antonio Spurs? Would Rivers continue to augment? Or would he raze?

These are legitimate questions that are as difficult to answer as they are painful to contemplate. And those questions are what will inevitably await the Clippers should they fall short again this season. Just don’t expect them to admit it.

Pressure makes diamonds and pressure busts pipes. At this point, we don’t know if the Clippers are precious stones or a flood waiting to happen, and neither do they.

What happens if they are given everything they need and ultimately fall short, anyway? That is the question that nobody in Rivers’ locker room even wants to ponder, much less find.

So as Jordan and Griffin vanished into the night, each having refused to mutter the end-goal for this team, this season, rest assured, the stakes have never been higher. Deep down within, the raging fire burns.

Trying to not look too far ahead, the Clippers take their season one day and one game at a time. Eagerly, though, they have begun their slow march toward an opportunity at redemption. And after what they’ve been through and now, with the opportunity they have been given, it is scary to consider what may be in store if they continue to fall short.

During their playoff run last season, Chris Paul admitted to losing sleep over the thought of losing to the Spurs in the first round. Somehow, they seemed to have toppled Goliath, only to see their season end in stunning fashion.

“So close? I don’t even know what that means, anyway,” a forlorn Paul told the media after that fateful Game 7 loss in Houston.

To a man, that pain still drives these Clippers. Quietly, they’ll go about their business with one goal in mind—even if they won’t admit it.

Quietly, determined and focused, they are working for and toward earning an opportunity to redeem themselves.

It’s so obvious, it doesn’t even need to be said.