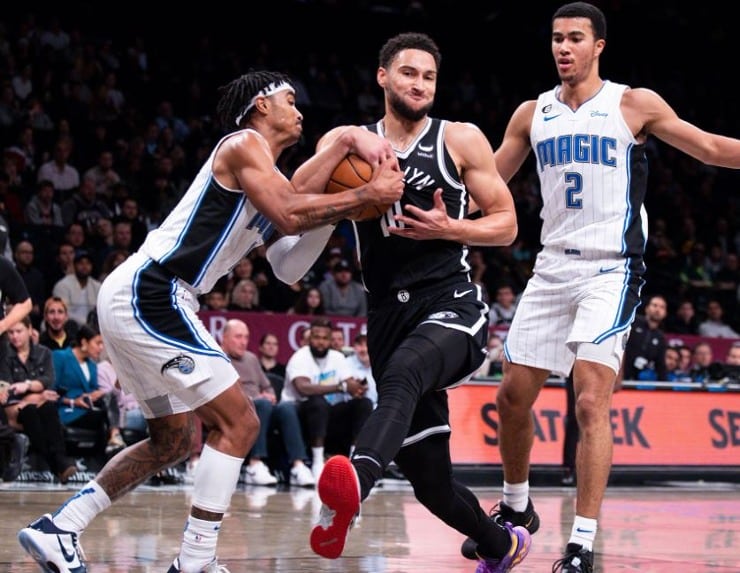 On Monday, in the first half of the Brooklyn Nets’ 109-102 win over the Orlando Magic, Ben Simmons exited the game due to soreness in his left knee. The three-time All-Star already missed four games from Oct. 31 to Nov. 5 because of the same injury.

Nets coach Jacque Vaughn believes another MRI will not be necessary. “We’ll check him day by day, see how he responds with a little treatment,” Vaughn said after the win, “see what it looks like [Tuesday].”

According to a few NBA betting sites, the Nets now have the ninth-best odds to win the championship in 2023. Some sportsbooks show better odds for the Philadelphia 76ers and Cleveland Cavaliers.

"Super efficient, fun to be a part of."
Kyrie Irving discusses Kevin Durant's big night and Jacque Vaughn gives an injury update on Ben Simmons after Nets 109-102 win over the Magic pic.twitter.com/wcs1sxM1Pm

Simmons’ latest knee soreness is not related to his back injury. The Nets coach reiterated that point after the game. “No, I think more so than anything the accumulation of games,” Vaughn added.

“He hasn’t had this amount of accumulation of games over a period of a long time. Talked to the performance team about that. We were warned about that just as these games start to add up.

“His cumulative load as that begins to add up, it’s really stretching him sometimes the amount of games we’ve just had with the minutes that he’s played pretty high going into tonight’s game.”

After missing four games, Simmons went on to average 10.5 points, 7.0 rebounds, and 5.2 assists throughout the rest of November. He’s expected to miss Wednesday night’s home game against the Washington Wizards.

While Simmons is logging a career-low player efficiency rating of 14.9, he’s also recording a career-best true shooting percentage of 61.5%. The guard is more accurate based on fewer field goal attempts per game (5.9).

Furthermore, in Brooklyn’s 109-107 win against the Portland Trail Blazers on Nov. 17, the 26-year-old finished with his first double-double of the season and first since the 2020-21 season.

In a 115-106 road loss to the Philadelphia 76ers last Tuesday, Simmons recorded his second double-double of the season. He amassed 11 points, seven boards, 11 assists, three steals, and three blocks in 33 minutes.