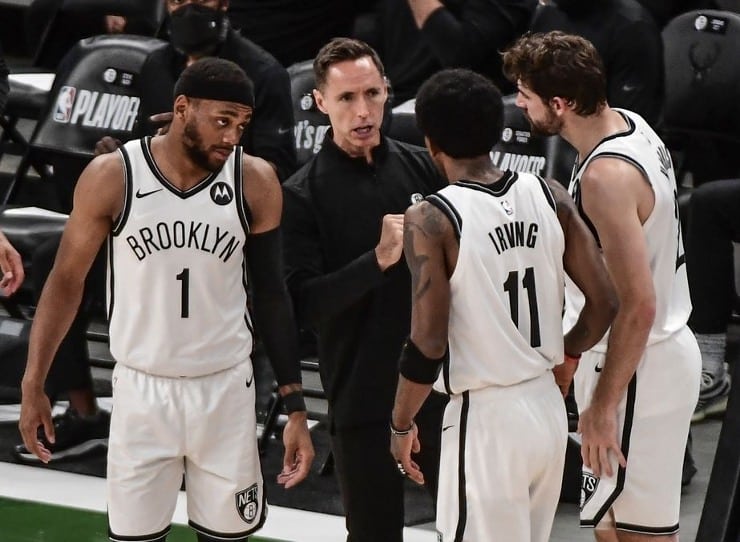 Kyrie Irving blew off former Brooklyn Nets coach Steve Nash’s play calls 10 times in one game, according to one NBA scout who chose to remain anonymous.

On Oct. 29, in the Nets’ 125-116 loss to the Indiana Pacers, Irving ignored Nash’s play calls on 10 separate occasions. Once or twice could have been accidental.

Per multiple NBA betting sites, the Nets have the sixth-best odds to win the championship in 2023. Some sportsbooks are giving the Cleveland Cavaliers higher odds.

NBA Scout: “I couldn’t believe what I was seeing. Nash would call something, and he’d run the opposite. I’ve never seen anything like that.” pic.twitter.com/DFfbKE1FUH

However, the seven-time All-Star ran the wrong plays on purpose in efforts to sabotage the coaching staff and the rest of the team. “I couldn’t believe what I was seeing,” the NBA scout told The New York Post.

“Nash would call something, and he’d run the opposite. I’ve never seen anything like that.” Of course, Nash was fired by the organization on the first of the month after the team’s 2-5 start.

While Nash was the head coach of the Nets, other unnamed scouts agree that he was only the coach by title. Therefore, he had no control over his locker room.

“Nash was technically the coach, but regardless of what game plan he formed, they [the players] did whatever they wanted,” revealed another unnamed scout.

It appears this problem falls back on Nets owner Joe Tsai, G.M. Sean Marks, and Nash as well. Why did the front office never discipline specific players for insubordination?

Irving’s on-court issues were only a small part of the problem. Last week, the 12-year veteran was suspended by the Brooklyn Nets for at least five games for promoting anti-Semitism on social media.

Per our insider sources here at Basketball Insiders, the 30-year-old is contemplating retirement right now. Refusing the COVID-19 vaccines was one thing, but the Nets guard destroyed his trade value by offending the Jewish community with his recent Internet posts.

Moreover, Irving finally apologized on Instagram after boxing himself in a corner. But it is still difficult for any individual to improve his or her own reputation after promoting hate speech in today’s political climate.

The seven-time All-Star is now borderline untradable for reasons that have little to do with basketball statistics.

Not to mention, the guard appeared in a total of 111 games with the Nets while missing a total of 128 games. Even when healthy as an offensive star, he’s not dependable due to inconsistencies.