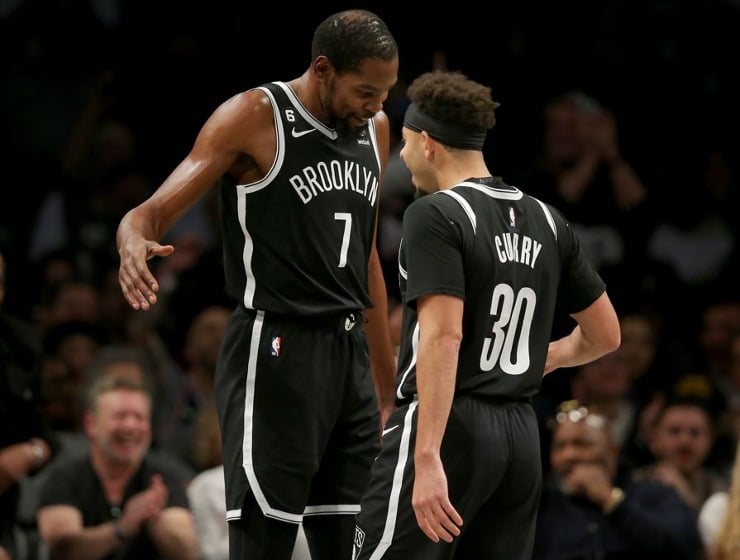 The Brooklyn Nets fired coach Steve Nash earlier this month and promoted assistant Jacque Vaughn to the head coach position, and one notable star who has already noticed positive change is Seth Curry.

“It’s been great from Day 1 he got the interim job,” Curry said on Wednesday night, following the Nets’ 112-85 win over the New York Knicks. Vaughn earned his first win as head coach. Under Nash, the Nets began the season 2-5.

According to a few NBA betting sites, the Nets possess the sixth-best odds to win the championship in 2023. Some sportsbooks are showing the Cleveland Cavaliers and Philadelphia 76ers with better odds in the Eastern Conference.

Jacque Vaughn's message in his 1st speech to the team before Washington. Seth Curry credited this speech and mindset from JV after the Knicks win for the team's improvement.

"That kind of mindset riled the team, that's kind of the mindset we took on every day." pic.twitter.com/Z72fu8DwNR

“I didn’t know what would happen, but he came in and was honest with us and just saying, ‘I’m going to work hard every day. Every day they ask me to be the interim head coach, I’m going to come in, I’m going to coach you guys as good as I can,'” continued Seth Curry.

“That kind of mindset riled the team, that’s kind of the mindset we took on every day. [He’s] doing a couple of things scheme-wise. But honestly, it’s just mentality, guys rallying together, bringing more of a competitive mindset as a group.”

Of course, this was Brooklyn’s eighth consecutive win over the Knicks. This victory matches their second-longest winning streak against New York in franchise history. From 1984–86, the Nets won 11 straight games against them.

As the new leader of the team, Vaughn discussed his strategy moving forward. “So, if we can focus on defensive rebounding, we can take a big jump on the defensive end,” Vaughn said.

“We’ve already taken a big jump last four games, teams under 100 points, which has been great. So definitely concerted effort.”

Furthermore, the Nets play the Los Angeles Clippers on Saturday at 4 p.m. ET. Brooklyn is a 1.5-point underdog on the road at Crypto.com Arena.