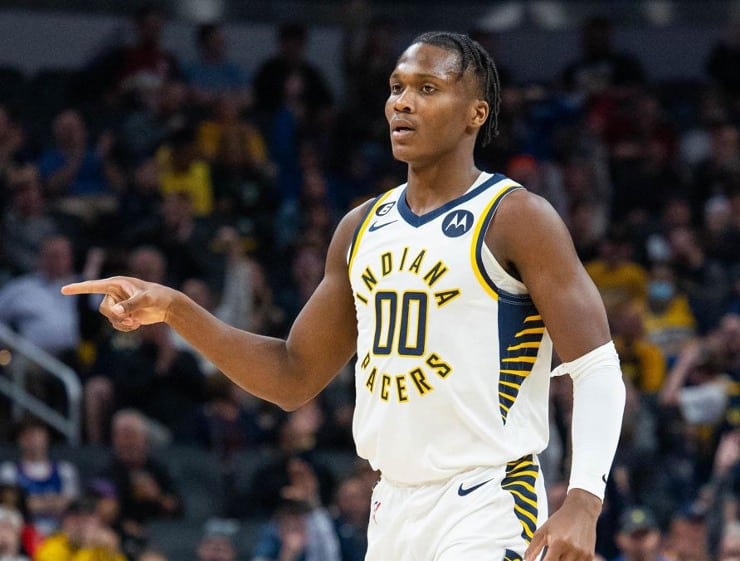 Indiana Pacers rookie Bennedict Mathurin wants to become one of the greatest players in NBA history, but he also wants to achieve his goal of being an influential role model for his community.

“I feel like I have no choice but to be great,” the Pacers guard told Bob Kravitz of The Athletic. “A lot of people play a sport because they have a talent, but I play for a different reason. I want to be one of the greatest players ever. I want to influence the kids [back in Montreal] to believe in themselves.

“Where I grew up [in the impoverished Montreal-Nord, Quebec, neighborhood], a lot of kids make bad decisions because they never got the chance to be around people who want the best for them. I want to give them motivation. And I want to take care of my family. I made that promise to myself when I was very young. I have no choice. That’s the way it is.”

8-year-old Jaxton brought his Bennedict Mathurin drawing to a game last month hoping to give it to him.

tonight, he got to meet @BennMathurin, gift him the drawing and watch the team warmup.💙 pic.twitter.com/oyN7QSKTj0

Based on a few NBA betting sites, the Pacers have the seventh-lowest odds to win the championship in 2023. Though, some sportsbooks are not ruling out a potential playoff appearance.

Mathurin was selected sixth overall by the Pacers in this year’s draft. Through his first 28 games of his NBA career, the Canadian guard is well on his way to inspire others.

In Indiana’s 124-109 win against the Chicago Bulls on Oct. 26, the guard became the first rookie in Pacers franchise history to score 100-plus points through five career games.

“Growing up wasn’t easy,” added the Pacers guard. “I told myself as a kid, especially after my brother died, ‘When I grow up, I’m going to provide for my family.’ I always knew since I was a young kid what I wanted.”

When Mathurin was 12, his 15-year-old brother, Dominique, died in a bicycle accident.

In 2018, Mathurin became the first Canadian-born player to join the NBA Academy Latin America in Mexico City. North Pole Hoops marked the Montreal native as the best Canadian prospect in his class.

Pacers fans love him and will continue to show their support. That’s the bottom line. There are likely millions of supporters across the world that Bennedict Mathurin has already inspired since his college days.