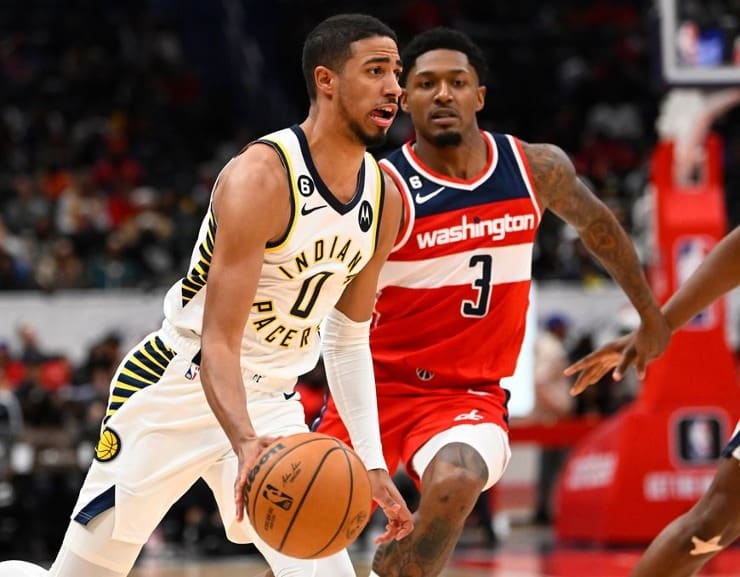 Indiana Pacers guard Tyrese Haliburton has been downgraded to questionable for Friday night’s road game against the Utah Jazz.

On Wednesday, the 22-year-old suffered a left groin injury in the Pacers’ 137-114 blowout loss to the Sacramento Kings at Golden 1 Center.

According to a couple of NBA betting sites, the Pacers have the seventh-lowest odds to win the championship in 2023. Sportsbooks are giving the Chicago Bulls and Washington Wizards better odds of qualifying for the postseason.

Jalen Smith (facial contusion) is not on the Pacers’ injury report for Friday’s game in Utah.

However, Tyrese Haliburton is questionable with a sore left groin. (And Chris Duarte remains out.)

It was Haliburton and Buddy Hield’s first game played in Sacramento against the Kings. In the 2020 NBA Draft, Haliburton was selected 12th overall by the Kings out of Iowa State.

Of course, Hield was picked sixth overall in 2016 out of Oklahoma by the New Orleans Pelicans. He was then traded to Sacramento in February 2017.

In Indiana’s loss to the Kings, Haliburton finished with nine points, four boards, 10 assists, and two steals. He shot 4-of-13 (30.8%) from the floor and missed a shot beyond the arc.

“Kings outplayed us tonight,” Haliburton said after the loss. “They’re a good team.” Sacramento outscored the Pacers 31-8 in fast break points. The Kings also outrebounded them 58-47.

“Tough game,” Pacers coach Rick Carlisle said during the postgame interview. “This game is on me. I didn’t have them prepared for what was coming. The transition points really tell the story of the game. We were a step slow.”

Mike Conley and Rudy Gay both remain OUT on the Jazz’s latest injury report ahead of Friday’s game vs. the Pacers.

Furthermore, Hield ended his performance with 17 points, four rebounds and one assist in 27 minutes of action. The soon to be 30-year-old is Sacramento’s all-time leader in three-pointers with 1,248.

Other players on the Pacers’ injury report include Daniel Thesis (knee), Chris Duarte (ankle). Both Theis and Duarte remain out indefinitely. Jalen Smith is no longer listed. He exited Wednesday night’s game due to a facial contusion.

As for the Jazz, Rudy Gay (hand) is out definitely. Additionally, both Mike Conley (knee) and Johnny Juzang (wrist) were downgraded to out against the Pacers.

Sportsbooks show Utah as a 4.5-point favorite at home. Per ESPN’s Basketball Power Index, the Jazz have a 67.3% chance of defeating Indiana on Friday.