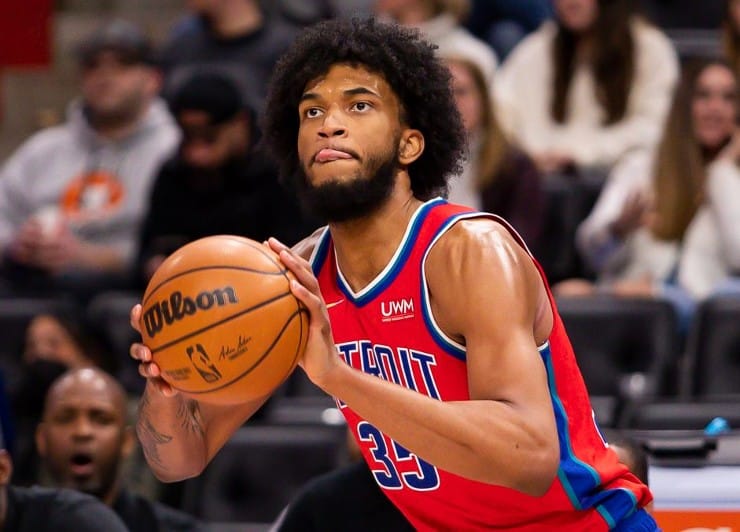 Cade Cunningham is out for the remainder of the season after undergoing surgery on his left shin. Detroit has lost its last five straight games. And the Pistons are 2-8 in their past 10 games played.

A number of NBA betting sites are giving the Pistons the third-lowest odds to win the championship in 2023. However, some sportsbooks are showing the Clippers with the fourth-best odds this season.

Pistons forward Marvin Bagley III is questionable for tonight’s game against the Clippers with a non-Covid illness, per a team spokesman.

Through 22 appearances this season, Bagley is averaging 10.7 points and 6.1 rebounds per game while shooting 54.5% from the field and 28.6% beyond the arc. He has made starts in 13 games.

Additionally, Bagley scored season highs of 19 points against the Utah Jazz, Cleveland Cavaliers, and Dallas Mavericks. On Dec. 1, in the Pistons’ 131-125 win over the Mavs, the forward also grabbed a season-high 13 rebounds in 35 minutes.

As for the Clippers, John Wall (ankle) was upgraded to probable and Kawhi Leonard (knee injury load management) is out for this interconference matchup. Leonard has made only 13 appearances so far this season.

For notable betting trends, the Pistons are 1-9 in their previous 10 home games. Not to mention, they are 1-10 in their last 11 meetings at home against Los Angeles. Detroit is 2-5 ATS in its past seven contests played this month as well.

NBA INJURY ALERT: Clippers SF/PF Kawhi Leonard (injury management) has been ruled out for Monday's game vs. the Pistons.

PG John Wall (ankle) is not on the injury report. pic.twitter.com/bQpeQvyzO2

Meanwhile, the Clippers have won seven consecutive games versus Detroit. They are 4-1 in their last five matchups against Central Division opponents. And the team is 6-2 ATS in its past eight contests. On Nov. 17, Los Angeles won 96-91 over the Pistons in the first meeting of the season series.

Per ESPN’s Basketball Power Index, the Clippers have a 66.2% chance of defeating the Pistons at Little Caesars Arena. Sportsbooks show Detroit as a 6.5-point underdog at home.