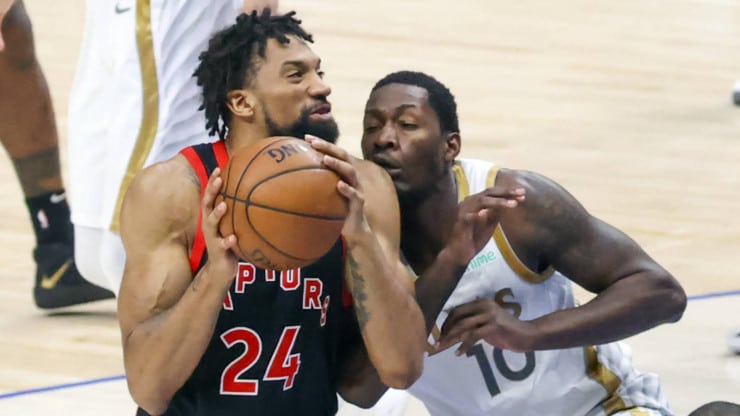 Toronto Raptors free agent center Khem Birch is re-signing with the team, according to his agent. The contract is a three-year, $20 million deal. The six-foot-nine Montreal native finally has the opportunity to remain on Canada’s lone NBA team for the foreseeable future. In the 2020-21 NBA season, in 67 games played, Birch averaged 7.2 points, 5.8 rebounds and 1.3 assists per game. He also ranked 11th in the league in offensive rebounding percentage (11.6 percent) and 12th overall for offensive rebounds (174).

On July 10, 2019, the center signed a two-year, $$6 million contract with the Orlando Magic. Last season, he earned $2,586,036. On April 8, 2021, he was waived by the Magic. Two days later, he signed a contract to play the rest of his season for the Raptors. On April 11, 2021, Birch made his debut for the Raptors at Madison Square Garden against the New York Knicks. In Toronto’s 102-96 loss, the fourth-year player had four points and five rebounds in 18 minutes of play. Three days later, in the 117-112 victory over the San Antonio Spurs, he tied his career-high with 14 points, six rebounds, one assist, one steal and two blocks.

On the Raptors, he earned a NBA career-high season average of 11.9 points per game. While he only played 19 games for the Raptors last season, he recorded a higher field goal percentage (.556) in Toronto than in the 48 games played with the Magic. However, the 28-year-old center also committed 21 more turnovers in 29 fewer games played in Toronto than he did in Orlando. For the most part, Birch helped the Raptors to play more like a contender when facing superior teams. His presence on the court helped out especially on defense and acquiring rebounds.

Although the team finished 27-45 (.375) last season, ranking fifth in the Atlantic Division and 12th in the Eastern Conference, they are not far off from returning to the playoffs in the coming seasons. General manager Bobby Webster has to do what he can to keep Fred VanVleet and Pascal Siakim on the roster. In early February, Webster was re-signed to a multi-year extension to remain as the team’s GM in Toronto. Furthermore, Siakim’s name has been mentioned throughout multiple trade rumor articles and tweets on the Internet lately. Fans can only speculate offseason moves right now.