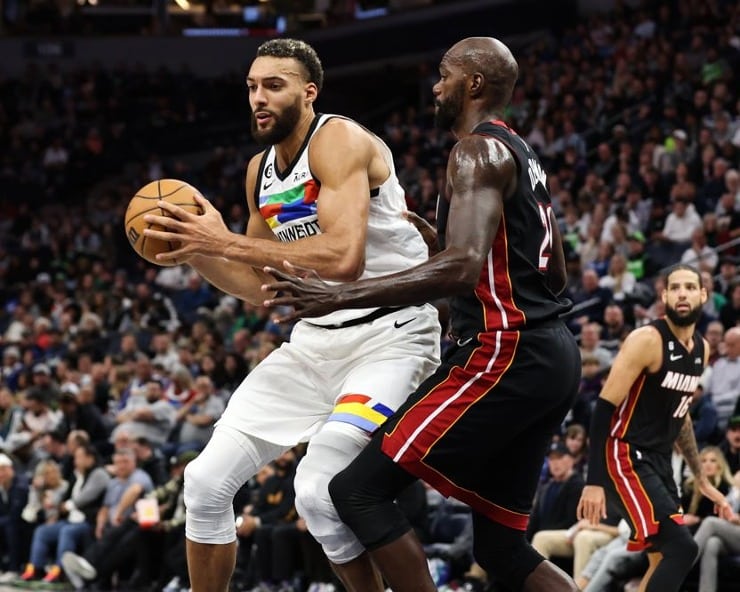 Of course, Beverley was then traded to the Los Angeles Lakers. As for Gobert, through 22 starts this season, the 10-year veteran is averaging 13.3 points, 11.9 rebounds, and 1.3 blocks with the Timberwolves. Plus, he’s shooting 64.1% from the field.

According to a couple of NBA betting sites, Rudy Gobert has the ninth-best odds to win Defensive Player of the Year in 2023. A few sportsbooks are giving Draymond Green, Brook Lopez, and Giannis Antetokounmpo better odds.

It is impossible not to be over the moon happy for Rudy Gobert.

“I’m really happy here. Like I said, it takes time,” Rudy Gobert told Chris Hines of Minneapolis Star-Tribune. “You build relationships, you create memories and obviously trying to win a championship here would be amazing. That’s the goal, that’s why I’m here.”

When Gobert played for the Jazz, the Western Conference contender was eliminated three times during the second round of the playoffs. They fell short against the Golden State Warriors in 2017, Houston Rockets in 2018, and Los Angeles Clippers in 2021.

Rudy Gobert likes playing for the Timberwolves, will always respect the Jazz fanbase

However, the center received six NBA All-Defensive First-Team selections (2017–22) during that time span. Not to mention, Gobert won Defensive Player of the Year three times (2018–19, 2021).

“I feel the love. It’s beyond basketball,” Gobert said of the Jazz fanbase. “For me, it means a lot to just see that regardless of what happens on the business side. On the human side, people are always going to have my back.

“In this league when a player gets traded, usually people try to only focus on the basketball. But the way I am, things are bigger than just basketball. The community, there’s relationships. There’s a lot of people that always had my back.”

Last season, in 66 starts, Gobert averaged 15.6 points, 1.1 assists, and 2.1 blocks. Moreover, the former Jazz star logged a career-high 14.7 boards per game. It was the first season of his career he led the NBA in rebounds.

Unfortunately, the 30-year-old has not yet earned the support of Timberwolves fans. His averages for points, rebounds, and field goal percentage are all five-year lows.

Furthermore, his 1.3 blocks-per-game average is the lowest since his rookie 2013-14 season. For a player who ranked fifth in block percentage (5.7%), second in defensive rebounds (727), and second in defensive rating (103.3) last season, Gobert is disappointing the Minnesota fanbase right now.

If Rudy Gobert hopes to win over fans with his new team, he has to start playing better. For good news, at least the center ranks third in rebounds per game and total rebound percentage. According to Basketball-Reference, the Timberwolves center has a Hall of Fame probability of 21.6%.