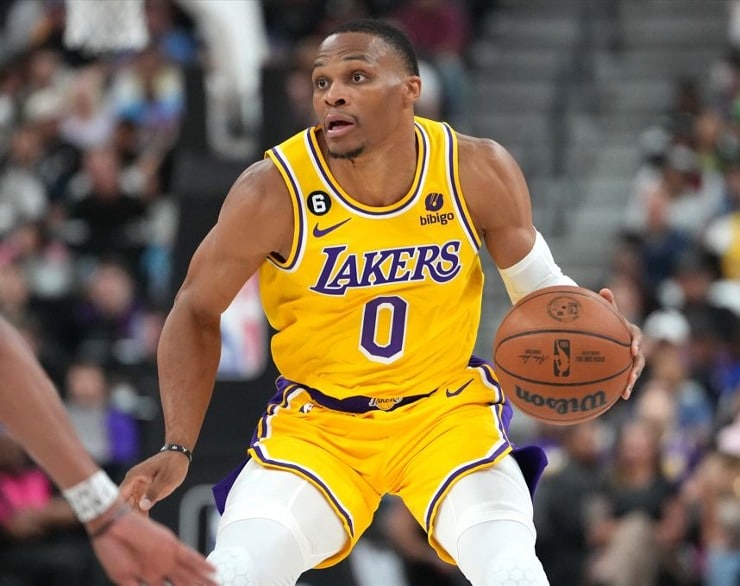 The LA Lakers had a terrible start to the season and many were calling for Russell Westbrook to be traded just weeks into the season. In the past few weeks, both Westbrook and the Lakers have turned their season around. Lebron James and the Lakers were 2-10 just over a month ago and now the team has an 11-15 record. However, they are still last in the Pacific Division and twelfth in the Western Conference. Even with the struggles this season, Westbrook has been praised for embracing a role of the bench for LA.

Former NBA head coach Stan Van Gundy and NBA champion Dwayne Wade love what they are seeing from Westbrook in his new role with the team. He’s played in 25 of the 26 Lakers games this season and has only started three times.

NBA betting sites have Russell Westbrook as the favorite to win Sixth Man of the Year at (+175).

Russell Westbrook with a NO-LOOK dime to Anthony Davis 👀pic.twitter.com/Fksb8TGMVD

For the 2022-23 season, Westbrook is averaging (14.4) points, (5.6) rebounds, (7.6) assists, and (1.0) steal per game. He leads the team is assists per game. In an interview with Sports Illustrated, Dwayne Wade and Stan Van Gundy had extremely positive things to say about the nine-time all-star.

“To not have to overthink all the time about, O.K., LeBron. O.K., I got to get the ball to AD. O.K., I got to shoot this. O.K., I don’t want to shoot. He doesn’t have to think as much. Russ has now put himself in a better situation by coming off the bench,” – Dwayne Wade

“Coming off the bench playing 20 to 25 minutes a game … [Russ] made a great decision to prolong his career.” – Dwayne Wade

Westbrook can play more freely off the bench when he doesn’t have to worry about getting the best player on the court the ball. He’s usually the best player on the court when he’s playing with the second unit. The 2016-17 NBA MVP is more than capable of taking over a game and leading his team when he’s on the floor. That is why it’s so invaluable for the Lakers to have the ability to bring Westbrook off the bench.

Dwayne Wade’s former head coach from 2003-2005, Stan Van Gundy had some positive things to say about Westbrook as well.

“What’s impressed me the most is that he’s really tried to focus on being more of a playmaker, to get in the paint and make plays for other people,”… “I don’t see him pouting about coming off the bench. He’s not making passive-aggressive comments in the media. I see acceptance from a guy who’s trying to make it work.” – Stan Van Gundy

Clearly Lakers head coach Darvin Ham made the right decision to bring Westbrook off the bench. It’s helped turn the Lakers season around in some ways.