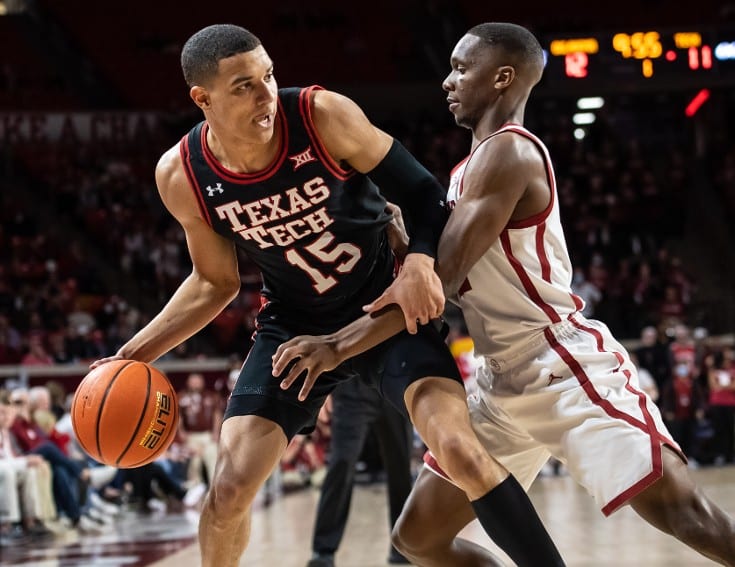 Will Bryson Williams and the Red Raiders extend their win streak to four games? In addition to the starting lineups, our top NCAA picks and betting trends are viewable below.

Last Saturday, in the Oklahoma Sooners’ 75-54 road loss against the Iowa State Cyclones, Jalen Hill and Jordan Goldwire each put up 15 points. Guard Jacob Groves amassed 11 points and 2.0 rebounds in 33 minutes played, too. In the first half, they were outscored 40 to 25.

Also, Oklahoma has won just two of its previous 10 contests. However, their second win during this stretch was a 70-55 blowout win over Texas Tech. Along with a three-game skid, the Sooners are now 2-7 away, 9-5 at home and 4-5 ATS on the road this season.

According to ESPN’s Basketball Power Index, the Red Raiders have a 84.9% chance of winning.

As for the Red Raiders, in this past Saturday’s game, they won 61-55 on the road over the No. 20 Texas Longhorns. Forward Bryson Williams scored a team-high 17 points in 33 minutes on the court. Clarence Nadolny generated a total of 14 points in 21 minutes played as well.

When asked about how his team is preparing for the Sooners rematch, Red Raiders’ head coach Mark Adams told reporters, “We better be ready to play.”

Moreover, Texas Tech has won eight of its last 10 games, and they are on a three-game winning streak. On top of beating Texas, their other two wins came against Baylor and TCU. After this impressive victory, the Red Raiders are 16-0 at home, 3-5 away and 13-3 ATS at home.

Equally important, pertaining to other head-to-head matchups, the Red Raiders are 2-1 versus the Sooners in their previous three meetings. Needless to say, on Feb. 9, 2022, Oklahoma won 70-55 over Texas Tech at Lloyd Noble Center.

Heading into this Big 12 rematch, Texas Tech is a heavy 10-point favorite at home. The Sooners defeated them in the first matchup, but the Red Raiders are undefeated at United Supermarkets Arena this season. How can any bettor overlook a flawless 16-0 record in home games?

All things considered, the Red Raiders should win, the Sooners will cover the spread and the total will go over 130.5. If you are unfamiliar with basketball betting, skim through our handicap betting guide. Other NCAA picks are on the main page.