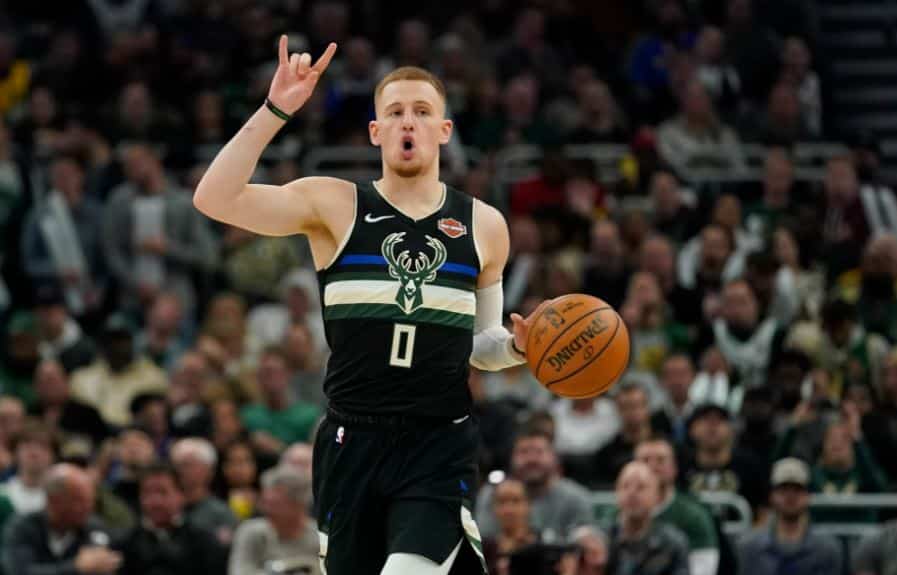 Steph Curry can be taken for granted sometimes. Fans and even his peers forget to appreciate how great of a player he is. He’s there franchise player and has helped the team win four titles in the last decade. This year Curry has a new teammate who is ‘blown away’ by the eight-time all-star.

Two-way guard Donte DiVincenzo was on a team that won the NBA Finals. He was on the Milwaukee Bucks who won the Finals in 2021. He’s been around a superstar player. DiVincenzo played for three seasons with Giannis Antetokounmpo. He recently spoke about his transformation from playing in the East and how he’s transitioned to playing in the West.

NBA betting sites have the Warriors at (+750) to win the Finals.

Donte has high praise for Steph as a leader 💯 pic.twitter.com/pGVRxZhSWS

DiVincenzo has high praise for his new teammate Steph Curry

Donte DiVincenzo has been lucky enough to play with two of the best players in the past quarter century. Antetokounmpo and Curry will go down as two of the greatest players ever.

“I played with a really dominant, great leader in Milwaukee in Giannis,”… “And coming here, obviously hearing a bunch about Steph, he’s really shocked me in terms of how down-to-earth as a person, down-to-earth as a leader and as a basketball player, how damn good he is.” – Donte DiVincenzo

He was blown away by how great of a leader Curry is on and off the court and that he’s exceeded all his expectations. DiVincenzo was most impressed by his ability to listen.

“I think that’s what makes him such a great leader and such a great player because, obviously, he knows other people see different things and he could blow you off at any time, but he doesn’t, and I think that’s the biggest thing as a leader that’s important.” – Donte DiVincenzo

DiVincenzo sprained his left hamstring, but is expected to make a return tomorrow vs the Cleveland Cavaliers. There’s a hope that he can provide a spark off the bench for the Warriors. That is an area where they have been struggling the most this season.