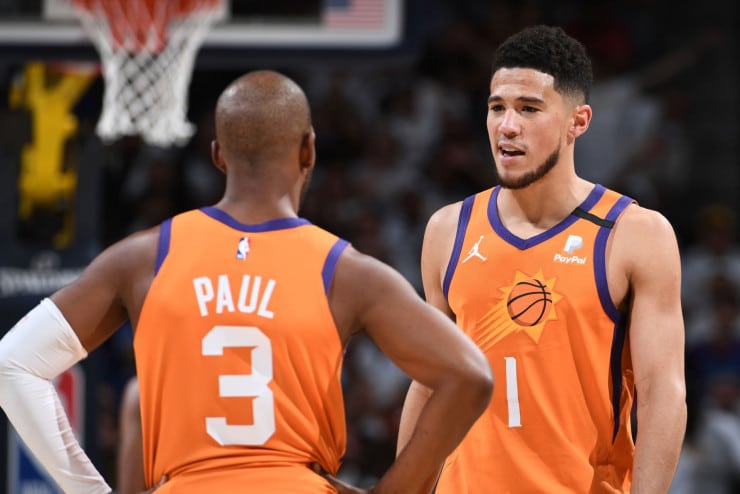 All eyes will be on the Footprint Center tomorrow tonight in Phoenix as the Suns will host the Warriors in their first meeting of the season. These Western Conference powerhouses are clearly the two best teams in the league, and the gap to the next-best team is quite large. The Suns made it to the NBA Finals last season and the Warriors are aiming to return for the first time in three years after their run of five straight Finals appearances from 2015 to 2019.

The Suns are returning home after a four-game road trip where they extended their winning streak to 16 games with a victory over Kevin Durant and the Nets. If Phoenix is able to win tomorrow night they will tie the franchise record of 17 consecutive wins which was set during the 2006-07 season.

“I am looking forward to it,” said Suns guard Devin Booker, who scored 30 points against Brooklyn. “Obviously, it is not a make-it-or-break-it game, not a playoff game. But we know it will be a high-energy game. Two best records in the NBA. It is going to be a high-intensity, fun game.”

The Warriors have won 14 of their last 15 games and their next two will come against Phoenix. They will have a couple of days off before hosting the Suns on Friday night. That is the start of a four-game homestand for Golden State, who will then face the Spurs, Magic, and Trail Blazers.

The Warriors have been crushing the competition at a historic pace. Through their first 19 games this season, Golden State is +291 points, which is the most in NBA history. The next two teams with the largest differential are the 1996-97 Chicago Bulls (+275) and the 2007-08 Boston Celtics (+265) who both won the championship that season.

Phoenix and Golden State have a combined record of 30-1 since October 28.

The Suns are 17-3 this season — only second to the Warriors.

They are 7-1 vs .500 teams — only second to the Warriors. pic.twitter.com/EmxNCZOtzp

Looking at the roster construction, the Suns and Warriors are quite similar. Both feature elite point guards that are excellent in isolation but love to pass. Both have incredible scorers at the guard positions and have lengthy defenders that anchor their perimeter defense. These two teams are also known for moving the ball extremely well on offense, leading to wide-open shots.

The real difference between these two comes in the front court. The Warriors use Draymond Green in a completely different way than the Suns utilize Jae Crowder and Cameron Johnson. Phoenix also has a distinct advantage at the center position with Deandre Ayton. That isn’t a knock on Kevon Looney, it is just that he possesses a different skillset.

The spotlight will be on Stephen Curry and Chris Paul, and for good reason. These two are extremely gifted athletes that are also two of the brightest players in the game today. Curry obviously is the better shooter but they are fairly equal in every other category. Even if these two aren’t scoring, they have shown a willingness and a desire to operate as distributors, which makes them tough to beat.

This unselfishness lends itself to better basketball. When the ball zips around without hesitation, it makes it that much more difficult for defenses to guard them. Each player serves as a piece to a puzzle, and when they are all fit together, it resembles a true masterpiece.

The Suns' ball movement on this play 😮 pic.twitter.com/ClomkeRjyz

The Warriors and Suns rank 1st and 3rd in assists per game this season, which should come as no surprise. The Warriors have led the league in assists in seven of the last eight seasons. Not only are these two great at moving the rock, but they are also able to finish more often than not. That type of execution comes with experience, trust, and great play calling. Steve Kerr may have more accolades than Monty Williams but they are both intelligent coaches that are tremendously respected around the league.

It is no coincidence that these two teams rank 1st and 3rd in defensive rating this season. They both have excellent individual defenders but they also operate well as a cohesive unit. Phoenix has seen great improvement on the defensive end of the floor from Booker, and Mikal Bridges still doesn’t get enough credit for his defensive prowess. The same can be said for Golden State with Andrew Wiggins.

The Warriors brought back one of their best defensive weapons in Andre Iguodala, though he isn’t at the same level that he was during his prime. The biggest addition to their defensive success has come in the form of Gary Payton II. The second-generation player was the Defensive Player of the Year last season in the G-League and has been a major factor in their success this year.

Looking at the team metrics, both teams are top three in Net Rating, Defensive Rating, Points Per Game, and both are top five in Pace and Offensive Rating. With guys like Curry and Paul conducting the offense, they are able to get good shots. That also benefits their defense, as they are able to get set and are not having to scramble to defend a fast break the other way.

Entering the season, much of the talk was about the parody in the Eastern Conference. In terms of the West, it was deemed to be wide open this year. Utah had a solid start but has since tapered off. Dallas, Portland, Denver, and both Los Angeles teams have been dealing with injuries. All of that being said, the separation between these two teams and the rest of the pack is quite noticeable just by watching them on the floor.

The Warriors still have another trick up their sleeve. After resuming full-court scrimmaging last week, Klay Thompson is inching closer to his much-anticipated return. He was just assigned to the team’s G-League affiliate (Santa Cruz Warriors) for increased practice reps. Thompson had an emotional moment on the bench Saturday night, and his teammates know how much it means to him.

The crowd while Klay stayed on the bench after the game pic.twitter.com/ZKFpFHFh8v

“I kind of predicted this would be the hardest part of his journey because he’s got the basketball back in his hands every day,” Curry said. “I’m super proud of just the way he’s approached this two-year window because unless he wants to write a book and tell every step of the way, nobody will understand what he’s been through away from the game so long. And it shows how much this game matters to him.”

As good as Golden State has been this season, they will only get that much better once Thompson rounds into form. They will also be getting James Wiseman back, which will certainly bolster their big-man rotation. Those might just be the things that separate these two teams in the final standings.

The 2021-22 season is transitioning into the month of December and while the rest of the league continues to find their identity, these two are just that far ahead of everyone else.