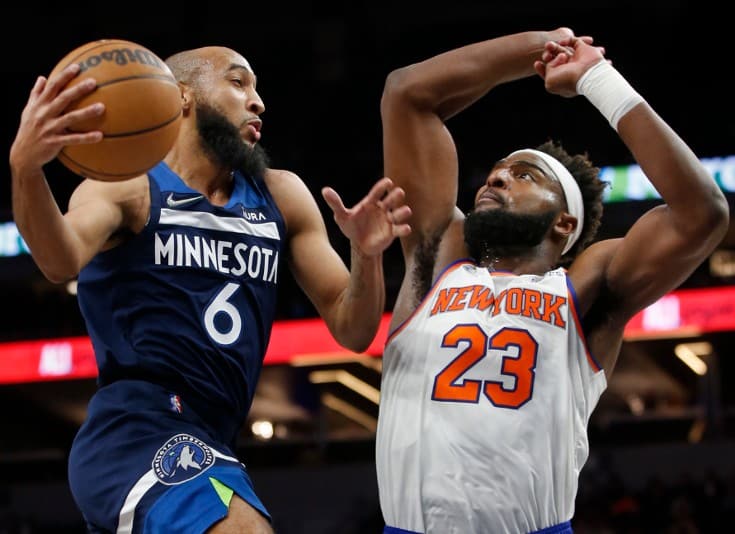 In Tuesday night’s interconference battle, the Minnesota Timberwolves (21-22) are facing off against the New York Knicks (22-22) at Madison Square Garden. Will Karl-Anthony Towns and the Timberwolves obtain their first head-to-head win this season versus the Knicks?

Leading into tonight’s rare matchup, the Timberwolves are 23-20 against the spread in the 2021-22 NBA regular season, whereas the Knicks are 21-23 against the spread. The tipoff time is 7:30 p.m. ET. This game can be watched live through Bally Sports Midwest, Bally Sports North, NBA TV, MSG, NBA League Pass and MSG+. According to Land of Basketball’s database, these two competing teams have played one another 61 times during the regular season all-time. New York is 34-27 versus Minnesota overall.

Not to mention, in the past three meetings, the Knicks are 2-1 against them. On Dec. 28, 2021, the first meeting during this regular season, New York won 96-88 at Target Center. On another topic, after losing 97-87 versus the Hornets on Martin Luther King Jr. Day, the Knicks’ record fell to 23-13 all-time on this holiday. This win was most upsetting to bettors, considering New York entered that Monday afternoon matchup as a one-point favorite. Although, for die-hard Knicks fans, this loss was not a shocker.

Much to our collective dismay, the Knicks drop to 23-13 all-time on #MLKDay https://t.co/LsBh2gggwW

Anyways, on Sunday, in the Timberwolves’ 119-99 home win over the Warriors, center Karl-Anthony Towns added one more double-double to his career total, accumulating 26 points, 11 rebounds and 1.0 assist in 30 minutes of action. Jaylen Nowell closed out his performance with 17 points, 2.0 rebounds and 4.0 assists in 25 minutes spent on the court. During crunch time, Minnesota outscored Golden State 28 to 18 in the fourth quarter.

Referring to ESPN’s Basketball Power Index, the Timberwolves have a 60.7% chance of winning.

On the other side, in the Knicks’ 97-87 home loss versus the Hornets on Monday, forwards RJ Barrett and Julius Randle ended their performances with double-doubles. Barrett put up 18 points, 12 rebounds and 5.0 assists in 39 minutes played. Likewise, Randle had 18 points, 10 rebounds and 3.0 assists in 31 minutes on the court. Despite New York outscoring Charlotte 20 to 11 in the fourth quarter, the team allowed 62 first-half points.

For important betting trends, the Timberwolves are 12-5 ATS in their past 17 performances. Plus, the total has gone over in four of their last five games played. Next, Minnesota is 5-2 straight up in the team’s previous seven contests, and the total has gone over in nine of the Timberwolves’ past 11 games on the road this season. Finally, the team is 1-5 SU in their previous seven matchups versus Eastern Conference opponents.

As for the Knicks, they are 5-2 ATS in their last seven performances. And, the total has gone under in four of their previous five games. Next, New York is 4-1 ATS in its past five meetings versus Minnesota at Madison Square Garden. Also, the total has gone under in five of their last six games played at home. Therefore, think about picking the Timberwolves to win and cover the spread. If you need help understanding the basics of NBA betting, check out our handicap betting guide.

Pick the Timberwolves to win, they will cover the spread and the total will go over 214. Minnesota is a three-point favorite on the road with BetOnline.