Connect with us
Home » news » Timofey Mozgov The Forgotten Center 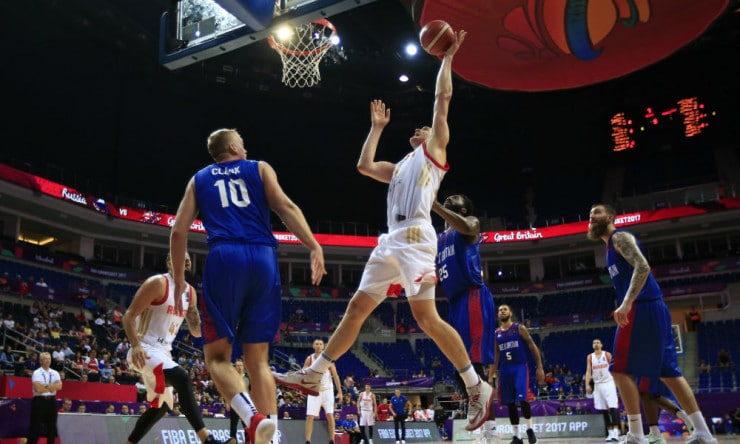 When the Brooklyn Nets agreed to ship long-time franchise center Brook Lopez to the Los Angeles Lakers in late June, Timofey Mozgov was a mere footnote in the trade, a salary dump of highest variety–an afterthought.

In fact, Mozgov has been an afterthought for much of his career and certainly so after the Lakers pivoted to a younger rotation in February 2016. The demotion came a little more than halfway through the first season of Mozgov’s massive four-year deal worth $64 million. Benched in favor of Ivica Zubac and other experimental lineups, the Mozgov contract looked unfathomably bad, an albatross-sized penance the Lakers’ front office would carry for quite some time.

Ultimately, Lakers had to part with the talented D’Angelo Russell just to entice a far-from-contending franchise like the Nets to take on the final three years of Mozgov’s guaranteed contract. In the ever-evolving NBA landscape, Mozgov and his hard-nosed approach ran out of style as many of his best colleagues expanded their range and added a three-point shooting touch. For many, it’s been easy to forget that Mozgov provided quality minutes to an NBA Finals-bound franchise in Cleveland not all that long ago.

Mozgov is no future All-Star, nor can he go toe-to-toe with the league’s brightest stars, but for the time being, the Nets have found themselves a serviceable asset at center.

Unsurprisingly, Mozgov operates well out of the pick-and-roll—something he’s found success doing alongside the aforementioned Russell. At 7-foot-1 and 275 pounds, Mozgov is an absolute hazard to navigate at times, particularly so when he’s rolling toward the hoop with a head full of steam. He’s a career 53.4 percent shooter and Mozgov’s penchant for the dirty work can make him a nuisance at times. Mozgov doesn’t shoot three-pointers like Lopez just yet (although he hinted at it shortly after the trade), but the Nets should have no problem acclimating him to head coach Kenny Atkinson’s uptempo, high-volume offense.

Following his trade to Cleveland during the 2014-15 season, Mozgov averaged 10.6 points, 6.9 rebounds and 1.2 blocks in 25 minutes per game for the Cavaliers. In all likelihood, the Nets would be satisfied with an output in that same ballpark, providing steady screens for their two-headed backcourt and cleaning up any easy chances under the rim. Mozgov would see his minutes drop from 25 to just 17.4 in 2015-16, but he still started 48 games for the eventual champions.

Currently, Mozgov is playing with Russia at FIBA EuroBasket and, through the tournament’s semifinals, has averaged 13.6 points and 6.9 rebounds on 57.7 percent shooting from the floor.

Against international competition, Mozgov has used his burly frame to punish smaller defenders on the block, bullying his way into high-percentage opportunities. For all of his shortcomings, Mozgov is a talented rebounder when given the chance and he’ll have plenty of them with the Nets.

While the sudden realization of a three-point shot was a great development for Lopez personally, it often stretched the Nets thin under the hoop. The Nets attempted 31.6 three-pointers per game in 2016-17 and Lopez hoisted up 5.2 of them on his own. Unfortunately, Lopez’s deep positioning often left the undersized Trevor Booker or Rondae Hollis-Jefferson in charge of corralling any potential second-chance opportunities—a strategy that often came up empty despite their best efforts.

The addition of both DeMarre Carroll and Allen Crabbe will allow Mozgov to stay right at home and in his rebounding wheelhouse. By all accounts, Atkinson, who was an assistant coach with the New York Knicks when Mozgov signed there during free agency in 2010, is excited to reunite with the center. During the Nets’ introductory press conference for Russell and Mozgov, Atkinson noted that the Russian’s role will not be focused on replacing Lopez.

“We can expect Timmy to be a little bit closer to the basket,” Atkinson said. “We’ll put him in that dunker position behind the basket. He’s really good there. He’s good at the elbows. He’s got a nice jumper.”

The Nets’ 103.5 pace last season was the league’s highest mark and their uptempo offense became a key focus in Atkinson’s modernized run-and-gun system. Still, Lopez typically operated at below-average speeds, often taking his time to post up or trailing fastbreak opportunities for kick-out three-point attempts. At that same press conference, Atkinson heaped praise upon their new starting center and even called Mozgov an elite worker.

“You could see he’s just a direct guy. There’s no B.S. there. He’s upfront,” Atkinson said. “He’s an elite, elite worker, one of the best workers I’ve been around in this league.”

For the Nets, that makes Mozgov an ideal fit.

Given the Nets’ revamped roster of shooters, there’s a chance they’ll take even more three-pointers in 2017-18. Brooklyn badly needed a sturdy player like Mozgov to clean the glass, run the floor and set some solid screens for their robust group of athletes.

With just rookie Jarrett Allen and the newly signed Tyler Zeller occupying space behind Mozgov on the depth chart, he’ll earn the lion’s share of minutes at center for Brooklyn until further notice. As a prospect, Allen is fascinating, but he’ll enter the NBA as one of the league’s youngest players and a less-than-viable option for big minutes right from the opening tip. Thus, the signing of Zeller this week makes sense, if only as insurance against any potentially crippling injury to Mozgov–the new addition poses no serious threat to the Russian’s playing time.

In part thanks to the fit, need and skill set, Mozgov could quite easily have a career year in Brooklyn. Mozgov’s inflated deal has made him an easy target for ridicule, but there’s reason to believe that he’ll not only succeed with Atkinson, but thrive as well. No longer a forgotten man, Mozgov perfectly fits this hodge-podge collection of intriguing prospects and once overpaid veterans.

He won’t replace Lopez, no, not by a long a shot, but a complete renaissance for Mozgov is on the cards as the hard-working rebounder will be key to the Nets’ success this upcoming season.