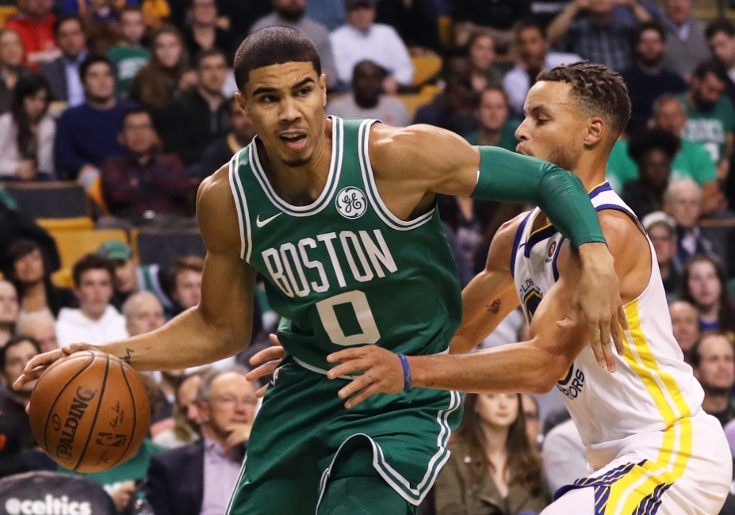 According to BetOnline oddsmakers, the Warriors possess +1100 odds of winning the 2022 NBA Finals. They finished their preseason with a perfect 5-0 record. Golden State’s front office staff have been preoccupied throughout the month of October.

Guards Langston Galloway and Quinndary Weatherspoon were waived last week. Plus, they waived Jordan Bell, Avery Bradley, Gary Payton II, Axel Toupane, Mychal Mulder and L.J. Figueroa. If Klay Thompson can stay healthy once he returns in December, the Warriors could be the team to beat.

Bet the Warriors at +1100 at BetOnline

Additionally, the Celtics have +4000 odds of winning their 18th championship this season. The team concluded their preseason with a mediocre record of 2-2. However, they made various offseason changes and additions. In June, Danny Ainge stepped down as president of basketball operations, while head coach Brad Stevens was promoted to the position. He finished 354-282 (.557) overall.

Then, Stevens hired Ime Udoka to become the organization’s 18th head coach in franchise history. Next, in August, the team signed centers Enes Kanter and Robert Williams III. And, Josh Richardson was re-signed to a veteran extension. After Chris Clemons and Theo Pinson were waived, Brodric Thomas was signed to a two-way contract.

Bet the Celtics at +4000 at BetOnline

Moreover, the Heat have +2500 odds of winning the 2022 NBA Finals. They ended their 2021 preseason with a record of 5-1. During the team’s offseason, they re-signed Jimmy Butler and signed P.J. Tucker. Not to mention, on top of acquiring Kyle Lowry in a trade with the Toronto Raptors, the organization re-signed Duncan Robinson, Gabe Vincent, Max Strus and Dewayne Dedmon.

Also, forward Caleb Martin was signed to a two-way contract, and guards Javonte Smart and Dru Smith were waived. The Heat are expected to make some noise in the playoffs this season. Last season, the team finished their regular season with an overall record of 40-32 (.556), ranking eighth in the Eastern Conference.

The Chicago Bulls are flying under the radar. An NBA futures liabilities list is not complete without the Bulls. They have +4000 odds of winning their seventh championship in 2022. Sports journalists are mentioning this team every other day, but there are gamblers who are not yet sold on this potential playoff contender. The Bulls closed out their preseason with a perfect 4-0 record. Ranking third in the league, the team also ended their preseason with an offensive rating of 111.1.

Meanwhile, during the offseason, in a sign-and-trade agreement with the New Orleans Pelicans, Chicago acquired Lonzo Ball. And, the organization traded Al-Frouq Amino to the San Antonio Spurs for DeMar DeRozan and Thaddeus Young. To add to these interesting moves, they also signed Tony Bradley and Alex Caruso. Tyler Cook, Stanley Johnson, Matt Thomas, Ethan Thompson and Alize Johnson were signed as well.

So, why would a team with bottom-five championship odds make this list? Well, the Thunder are still a Western Conference competitor bettors should keep an eye on. Despite possessing +30000 odds of winning the 2022 NBA Finals, to quote Leonardo DiCaprio from the 1997 Titanic film, “When you got nothing, you got nothing to lose.” Imagine if this team even qualified for the playoffs. They ended their preseason with a 1-3 record.

Furthermore, during the Thunder’s offseason, they re-signed guard Shai Gilgeous-Alexander and forward Mike Muscala. Guards Josh Giddey and Tre Mann were signed, too. Also, Paul Watson agreed to a two-way contract and forward Jeremiah Robinson-Earl was signed. Nick Collinson was named special assistant to G.M. Sam Presti as well. The Thunder are far off from winning. Though, the payout would be huge. Think about it.

What about bet counts? The Los Angeles Lakers (+350), Golden State Warriors (+1100), Brooklyn Nets (+260), Milwaukee Bucks (+750) and Phoenix Suns (+1600) are oddsmakers’ picks from BetOnline. Gamblers all over America are assuming the 2022 NBA Finals will be between the Lakers and Nets. This scenario is probable, but one should not count out the possibility of the Bucks repeating.

What if Kyrie Irving misses several games this season because he continues to refuse the COVID-19 vaccines? What if James Harden sustains a serious injury? Besides the Bucks, another team bettors should not count out is Golden State. When healthy, they are a title contender. These five aforementioned teams are the best bets on BetOnline’s NBA futures liabilities list.