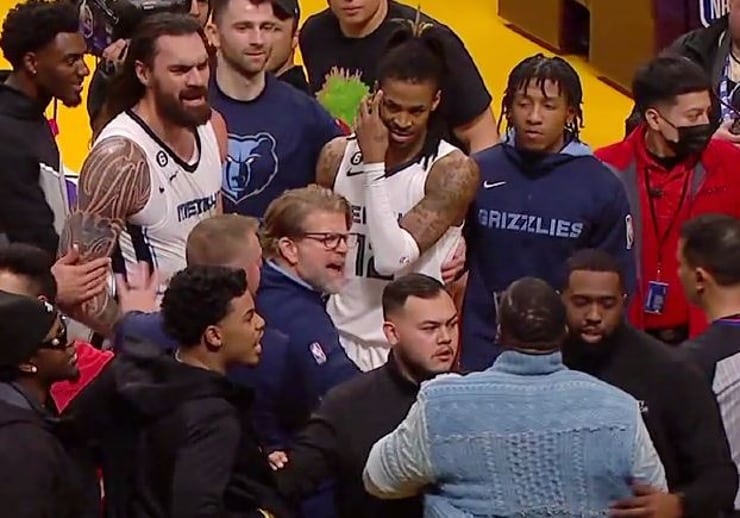 During the halftime break of Memphis’ 122-121 loss against the Los Angeles Lakers at Crypto.com Arena, Sharpe was spotted at the courtside arguing with Brooks, Adams, Ja Morant, and Tee Morant, Ja’s father.

Based on a few NBA betting sites, the Grizzlies possess sixth-best odds to win the championship. Check out which sportsbooks are giving the Denver Nuggets and Golden State Warriors greater odds. Watch the video below.

“They didn’t want this smoke, Dave,” Sharpe told ESPN’s Dave McMenamin after being escorted by security to the tunnel during halftime. “They do all that talking and jockeying, and I ain’t about that jockeying. It started with Dillon Brooks. I said he was too small to guard LeBron. He said, ‘F—k me.’ I said, ‘F—k you’ back.

Furthermore, Brooks ended his performance with nine points, six rebounds, three assists, and one block in 31 minutes as a starter. “I ain’t talking about that,” said the Grizzlies forward. “You can ask him. He’s the blogger or whatever he is. I don’t really care about all that. Next question.”

Sharpe was allowed to return to his courtside seat for the second half. Nothing more has developed from this confrontation. Feel free to watch the video and read Sharpe’s interview below. The Lakers went on to outscore Memphis 41-32 in the fourth quarter. Of course, the Grizzlies trailed 122-120 with 1.2 seconds remaining.

Shannon Sharpe spent halftime in the tunnel with security before returning to his seat for the third quarter. He granted ESPN a brief interview explaining what happened with the Grizzlies on his way to his seat: pic.twitter.com/XZNw6sQhEG

Brandon Clarke was then fouled and sent to the foul line. He made the first free throw and missed the second. Bane grabbed the offensive rebound but lost control of it, giving the Lakers possession with 0.4 seconds left to end the contest. This was Memphis’ second loss this season when leading after three quarters.

Likewise, it was the Lakers’ second win this season when trailing after three quarters. This loss snapped the Grizzlies’ 11-game win streak. Morant led Memphis in scoring with 22 points on 31% shooting from the floor.

Russell Westbrook recorded a game-high 29 points for the Lakers in 31 minutes off the bench. To watch other dramatic NBA-related videos, go the main page.