For most, the NBA Finals is all about whether or not your team features. Nothing much else matters. But the honest truth is that the odds are never stacked in favor of such a feat. In fact, a given NBA team really only has only a 1/15 chance of making it to the finals each year. So, statistically, fans shouldn’t expect to see any more than four or five finals appearances from their respective teams in a lifetime – anything more is a bonus.

Generally speaking, cheering on another team doesn’t sit well at all. It’s usually not an option. There are rare exceptions, like supporting the Miami Heat for your father who’s been a die-hard fan for 30 years, or supporting the Milwaukee Bucks because there’s a $100 futures bet riding on it. But more often than not, supporting any team other than your own just leaves a sour taste in the mouth, especially in the Finals. 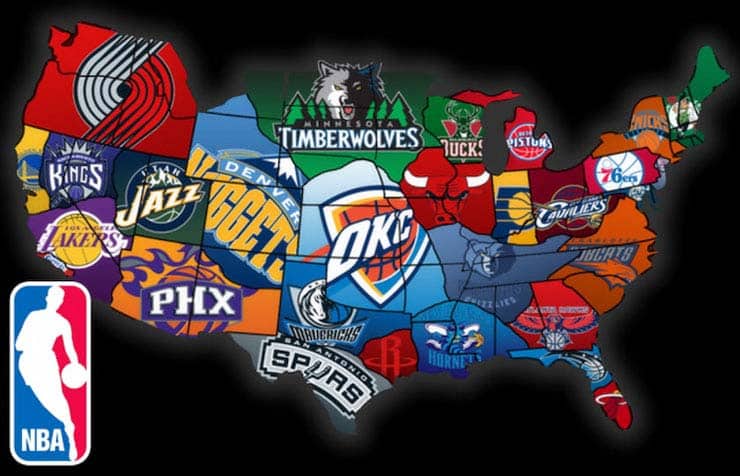 But what about supporting your division – is there anything wrong with that?

Perhaps. But not where this betting line is concerned at least:

BetOnline is now broadcasting odds for the winning division, meaning you wager on the division you expect the NBA Finals winner to stem from (see below).

With odds of +150, it’s possible to wager on an Atlantic Division team. So, that’s any one of the Boston Celtics, Brooklyn Nets, New York Knicks, Philadelphia 76ers, or the Toronto Raptors to taste championship gold.

Bettors can wager a future on a Pacific Division team with marginally better odds of +160. That’s any one of the Los Angeles Lakers, Golden State Warriors, Phoenix Suns, Sacramento Kings, and Los Angeles Clippers.

+1000 odds for a one in five chance of a Southeast Division team going all the way – that’s any one of the Miami Heat, Orlando Magic, Charlotte Hornets, Atlanta Hawks, and Washington Wizards.

Clearly, the oddsmakers don’t hold out much hope for a team from the Southwest hoisting the Larry O’Brien trophy come next summer. But with generous odds of +2000, a casual wager on Ja Morant’s Grizzlies, or Zion Williamson’s Pelicans to take it up a notch and cause an upset certainly seems worth the risk!

On top of the excellent odds for the specials on NBA Finals Winning Division (and the fact that your interest remains intact when your team inevitably gets knocked out), following the link and signing up using the BetOnline Promo Code of BOL1000 also entitles newcomers to the site for up to a $1,000 deposit bonus.

In essence, this means a bettor could even wager risk-free on multiple divisions with the sign-up bonus and still come out making a profit.

Feeling lucky? Go to BetOnline to place your wager today.