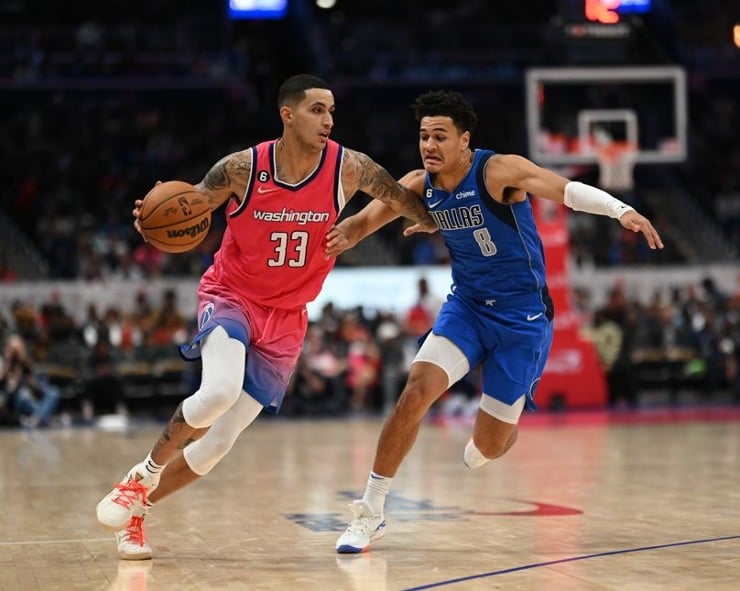 Washington Wizards forward Kyle Kuzma envies what superstars across the NBA can attain as primary ball-handlers, and the 27-year-old believes he can succeed in the same way.

Following the Wizards’ 113-105 win over the Dallas Mavericks on Thursday, the six-year player was asked if he felt comfortable as Washington’s No. 1 option.

Per multiple NBA betting sites, the Wizards have the 7th-lowest odds to win the championship in 2023. Some sportsbooks are giving them a slim chance to make the playoffs this season.

"I've been telling the coach to run the offense through me. This was the game to do it and look what happened." pic.twitter.com/OZHYlcBb3q

“No question I would love to do that, 100%,” Kuzma explained. “I love challenges. Maybe not [39.7%], that’s a little aggressive. I don’t think you can win NBA championships of that nature with that.

That’s a lot. But I have that type of ability to where I can make others better, I can score, I can do a lot of different things.”

In the Wizards’ home win over Dallas, the forward scored 36 points, tying his career high with Washington, and Kuzma finished with 11 rebounds, 7 assists and 1 steal. He also shot 14-of-26 overall.

During the fourth quarter, Kuzma generated 11 points, sinking 3 of his shots from downtown to help give the Wizards a satisfiable lead.

Of course, the Wizards guard is correct in terms of usage percentage. So far this season, Phoenix Suns’ Duane Washington Jr. and Philadelphia 76ers’ Jaden Springer lead the NBA in this metric (40%).

Kyle Kuzma being a primary ball handler and attacking downhill can be quite interesting for the Wizards. Way too good to be parked in a corner or a second fiddle to post up options/sets. pic.twitter.com/zIMLhWv8SL

Mavericks guard Luka Doncic still ranks 3rd in the league overall, with a usage percentage of 37.9%. As for Kuzma, the forward sits at No. 81. His percentage right now is 24.4%.

Last season, Ahmad Caver, Malik Newman, Matt Mooney, Joel Embiid, and Luka Doncic rounded out the top-5 players in usage percentage. Aside from the Mavericks, none of their teams went deep into the playoffs.

Kuzma ranks 8th in player efficiency rating (15.97) on the Wizards. However, the forward currently ranks third in scoring, averaging 18.8 points through 12 starts this season.

When the ball is in his hands, Kyle Kuzma finds a way to score. That’s the bigger picture.