Connect with us
Home » news » basketball insiders week in review 1023 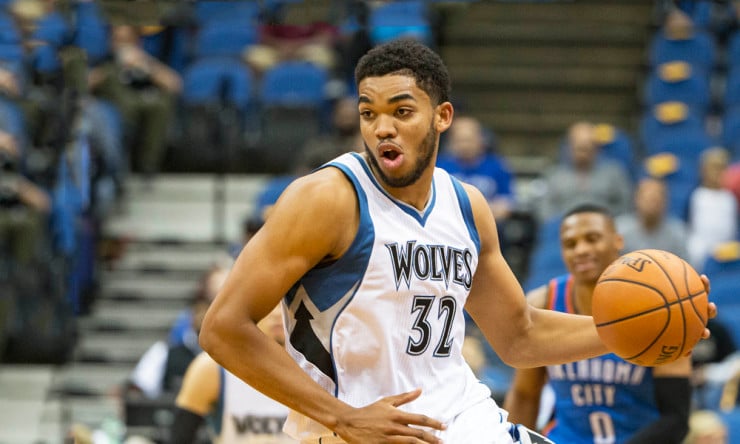 The Importance of Joakim Noah

Say what you want about Carmelo Anthony, Derrick Rose or Kristaps Porzingis, but whether the New York Knicks sink or swim this season may ultimately boil down to the productivity of one of their other new faces: Joakim Noah.

Of the four players, Noah has logged the least amount of preseason minutes and that’s disconcerting considering Rose – whose civil rape trial is expected to wrap up in the next few days – hasn’t even been with the team for more than a week.

To his credit, Noah has been there, just not on the court. He hasn’t appeared in a regular season game since January 15, has been limited in practice and missed the Knicks’ first three preseason games. Obviously, New York hopes that Noah’s season ends much more productively than it has begun.

One of the easiest things in the world to do as a sports journalist is to make a prediction about something, because almost nobody ever holds us accountable for those predictions. We’re all pretty smart people when it comes to this stuff, and we do know what we’re talking about, but the nature of sports is that they are unpredictable and surprising. If they weren’t, fantasy sports would be nowhere near the billion-dollar industry that they are.

For years now, I have held myself accountable on some of the predictions that I make. I have done that through an annual “50 NBA Predictions” article and a subsequent follow-up piece in May or June to take stock of how I did.

It’s gut-wrenching, frankly, but it’s also a lot of fun. So much so, in fact, that I was able to talk some of my Basketball Insiders colleagues into sprinkling in some predictions of their own this year. That means I can give them as much grief for being wrong as I give myself. Good times all around.

After establishing himself as one of the NBA’s premier players during his stint with the Orlando Magic, Dwight Howard’s time in the NBA has been a bit rocky ever since. Over the last four seasons with the Los Angeles Lakers and Houston Rockets, Howard has dealt with various injuries, on-court chemistry issues with teammates and a reduced role.

Most notably, Howard struggled to adjust to teammates like Kobe Bryant and James Harden. The Lakers were one of the teams on Howard’s wish list when he decided to force a trade from the Magic, but his time in L.A. didn’t go as planned as he clashed with Bryant and head coach Mike D’Antoni.

Howard’s move to the Rockets was expected to give Harden the help he needed to compete for a championship. But as Howard left the Rockets this offseason, the center’s relationship with Harden didn’t end on the best of terms. Howard even mentioned over the summer that their relationship wasn’t good enough for the team to be successful.

“Sacramento has to trade Gay,” an Eastern Conference executive told Basketball Insiders. “He’s already informed them he doesn’t like it there. They can’t let him walk for nothing.”

Gay can become an unrestricted free agent after this season since he has a $14,263,566 player option for next season. With that in mind, sources indicated that the Kings are ideally looking for a starting-caliber point guard in any trade proposal involving Gay.

Earlier this summer, the Portland Trail Blazers inked C.J. McCollum to a rookie-scale extension.  The Milwaukee Bucks did the same with Giannis Antetokounmpo.

Franchises have until Oct. 31 to extend the contracts of first-round picks as they head into the fourth year of their original deals. Additionally, teams have the same deadline to decide the third- and fourth-year options on 2014 and 2015 first-round picks.

The following is a list of eligible players.  Check back for updates through Oct. 31.  Note that the value of maximum extensions won’t be set until the 2017-18 salary cap is computed in July.

Hawks Brace For Summer Of 2017

Over the past decade, consistency is a term that can be used to describe the Atlanta Hawks organization. The team has made nine consecutive playoff appearances and allowed their core groups to remain intact long enough to reach their respective ceilings. The Hawks have been steadfast in their culture and dedicated to their approach of roster building.

However, 2017 could test the Hawks’ ability to remain consistent in this regard. With the league’s salary cap widely expected to exceed $100 million, the Hawks potentially have nine players who could be headed to the unpredictable land of free agency. When you talk to most players about their upcoming free agency, the majority will tell you they’re taking things day by day or that they haven’t thought about it in the least. But this isn’t the case. Some guys press and struggle due to the uncertainty. Some thrive in the contract year. A lot of players aren’t impacted one way or the other.

Is the Clock Ticking On Aldridge, Spurs? Maybe Not

A couple of days ago, long-time sportswriter Jackie MacMullan of ESPN dropped an off-handed comment suggesting that Spurs forward LaMarcus Aldridge might not finish the season in San Antonio.

This is not the first time someone associated with ESPN has hinted at a rift between Aldridge and the Spurs. Zach Lowe of ESPN alluded to something similar, pointing out that the Spurs may need to rebuild and that trading Aldridge now would return the best value.

The Spurs as an organization are not very open, so the truth inside the team’s thinking has never been easy to understand because they simply do not engage anyone in rumor-related conversation. Because of this, most of what is said about the Spurs comes from agents or other executives who are dealing with the Spurs.

After this pseudo-story broke, we did some digging around and here is sort of what’s going on.

Which Knicks Are Helping Their Stock?

Hasheem Thabeet isn’t currently on an NBA roster. In fact, it’s been over two years since Thabeet was in the league.

It’s actually been over a year since Thabeet was on any professional basketball roster. The No. 2 overall pick in the 2009 NBA Draft, who was selected ahead of James Harden, Stephen Curry and DeMar DeRozan among others, most recently suited up for the Grand Rapids Drive of the NBA D-League during the 2014-15 season. He fared much better there, averaging 8.6 points, 6.2 rebounds and 2.4 blocks in 22.2 minutes. Among all D-League players, he ranked third in total blocks (117), fourth in Defensive Rating (101.3) and fifth in block percentage (8.7 percent).

Since well before he stepped foot on his first NBA court, the concept of Dante Exum has been a more popular topic of conversation than the player himself.

A wild card by any definition as he entered the league with little beyond glorified high school competition under his belt, Exum was in many ways the opposite of his dart throw pre-draft projections as a rookie. The relentless attacker who penetrated defenses at will in Australia was nowhere to be found, replaced by a tentative and conservative player who mostly looked intimidated by NBA size and contact. Flashes of immense future offensive potential were tantalizing, but also so rare that wondering if they could ever become the norm was justified. On the flip side, though, Exum’s defensive performance blew away all realistic expectations and established what many assumed was a concrete baseline.

With the 2016-17 NBA regular season less than a week from starting, Basketball Insiders has been looking at the race for each of the league’s annual awards. We’ve analyzed the race for Most Valuable Player, Rookie of the Year and Sixth Man of the Year thus far.

Today, let’s forecast the NBA’s 2016-17 Most Improved Player race. This particular award is always fun to monitor (and the hardest the predict) since it generally revolves around players taking the next step in their development or surprising everyone with a breakout season that few saw coming.