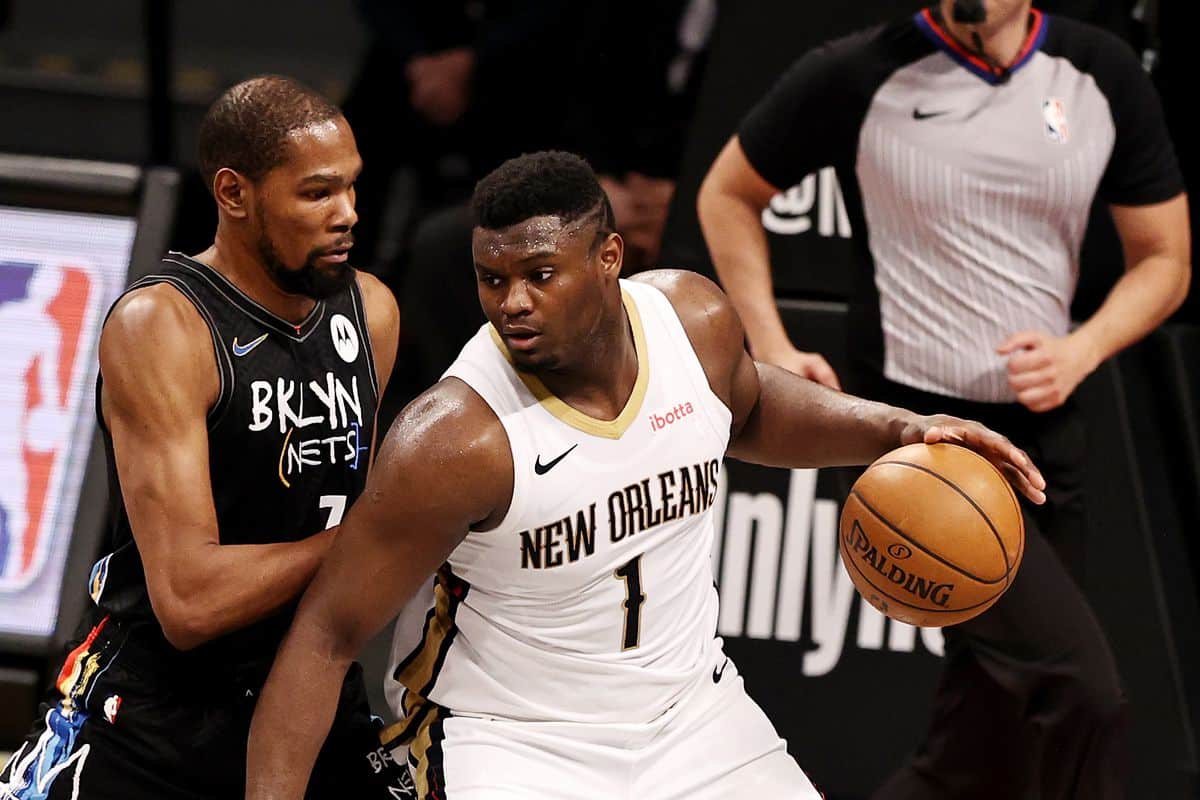 Week 1 of the NBA season continues and we are putting the Brooklyn Nets’ clash with the New Orleans Pelicans under the microscope by taking a look at the latest odds, as well as offering up some of our expert picks for the game.

Despite a turbulent off-season with the likes of Kyrie Irving and Kevin Durant seemingly destined for the exit, the Nets have managed to retain the spine of the roster and will be hoping to build on what amounted to a disappointing end to last season.

The Nets were swept aside by eventual runners-up Boston Celtics in the play-offs and their defensive frailties were glaringly obvious, but Brooklyn’s roster looks entirely different this year. The addition of Ben Simmons and Royce O’Neale will provide some much needed coverage with the latter consistency showing his strength as a defensive perimeter.

Add to that a fully fit Durant, who missed some three months of the season last year through injury, there is undoubtedly potential for another run at the post-season given the championship quality running throughout the squad.

Elsewhere, their opening week opponents the Pelicans welcome back the formidable 2021 All-Star Zion Williams, who had an injury-plagued season last year. Although there is always optimism surrounding New Orleans going into the new season, they typically disappoint and the previous campaign was no different after going 3-16.

However, there are reasons to be excited as a Pelicans fans having finished the season with aplomb, only losing out to the top-seeded Suns in 6 games after making it to the play-in tournament to earn a playoff berth.

While the addition of CJ Mccollum seemingly inspired their end-of-season push, the return of Zion, although a welcomed one, may bring a period of adjustment as the duo have featured on the court together sparingly.

How To Bet Claim $1000 Nets vs Pelicans Free Bets

Ahead of the opening week of the NBA, new customers to BetOnline can redeem $1000 worth of free bets – see below as to how to redeem yours

Our NBA expert has put together his three best Nets vs Pelicans predictions and betting picks. You can back these NBA betting picks with FREE BETS by signing up with BetOnline through the links below.

Our first pick predicts CJ Mccollum to surpass his implied total points, which is set at 20.5.

The 31-year-old joined New Orleans midway through last season, but he quickly became an integral part of their late run towards the play-off after consistently putting up points at shooting guard. How he has never made the All-Star team is baffling to some given his bucket reliance, and in 26 games after being traded he averaged 24.3 points, which bodes well for this selection.

With Zion returning, the share of points may be stretched thinner but their expected link-up could be cause for excitement for Pelicans fans.

Despite the Nets possessing a star-studded offence and arguably the most stacked squad in the NBA, there remain some question marks of the cohesiveness of the squad.

Not only were they constantly rocked by persist trade rumours concerning Irving and Durant, the turmoil and drama that the organisation have had to deal with may seep into their early season performances.

Ben Simmons, although supremely talented seemingly needs time to shake off some rust as he failed to didn’t do much in the preseason,  averaging just 4.75 points, 6.0 rebounds and 6.25 assists.

Although the Nets have a lot to prove after their drubbing at the hands of the Celtics in last year’s play-offs, we think their may well be a period of adjustment heading into the new season. Not only this, they almost always take their time hitting their stride  having lost 8 of their last 9 regular season openers.

Back New Orleans Moneyline @ +135 With BetOnline

The Nets’ chances of getting off the perfect start lie largely in the hands of Kevin Durant, and more importantly, Kyrie Irving.

For all his enigmatic behaviour off the court throughout the preseason, his ballhandling ability is undeniable and remains one of the most reliable points selections when it comes to NBA betting. In the 29 games last season, he put up 27.4 points per game on little under 60% true shooting, which also included a breathtaking a 60-point game.

Charlie is an experienced journalist specialising in soccer, but with a broad knowledge of the sporting landscape and the betting industry. Previously published on leading brands such as 90min and Checkd Media, and formerly a first-class Sports Journalism graduate at UCFB in the UK.