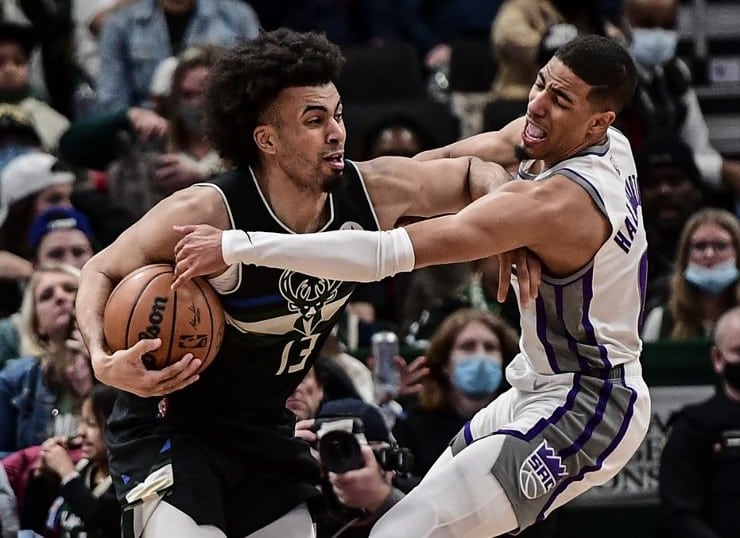 The Milwaukee Bucks have re-signed forward Jordan Nwora to a two-year, $6.2 million deal, according to multiple sources. Nwora was selected 45th overall by the team out of Louisville in the 2020 NBA Draft.

Numerous NBA betting sites are showing top-3 championship odds for Milwaukee. Can the Bucks win their second title with Giannis Antetokounmpo in 2023? Feel free to check out which sportsbooks are offering the highest odds.

While with the Salt Lake City Stars of the NBA G League for one game, the wing ended his outing with 26 points, 4 rebounds, 1 assist, and 1 steal in 23.7 minutes.

On December 18, 2021, in the Bucks’ 119-90 loss against the Cleveland Cavaliers, the second-year forward scored season-high 28 points in 44 minutes of action.

As for his NCAA career, in 93 appearances and three seasons spent with Louisville, the forward averaged 13.9 points, 6 rebounds, and 1 assist per game. From 2017 through 2020, Nwora made 44.5% of his baskets from the floor.

Of course, during his senior 2019-20 season, the New York native averaged career highs of 18 points and 7.7 rebounds per game. In addition to averaging 1.3 assists per contest, he shot 46.9% from long range.

He was then selected to the All-ACC First Team and All-American Third Team.

Based on Nwora’s career statistics in the NBA, he will likely post career-best numbers with the Bucks in the 2022-23 season. So far, the forward has improved with each passing season.