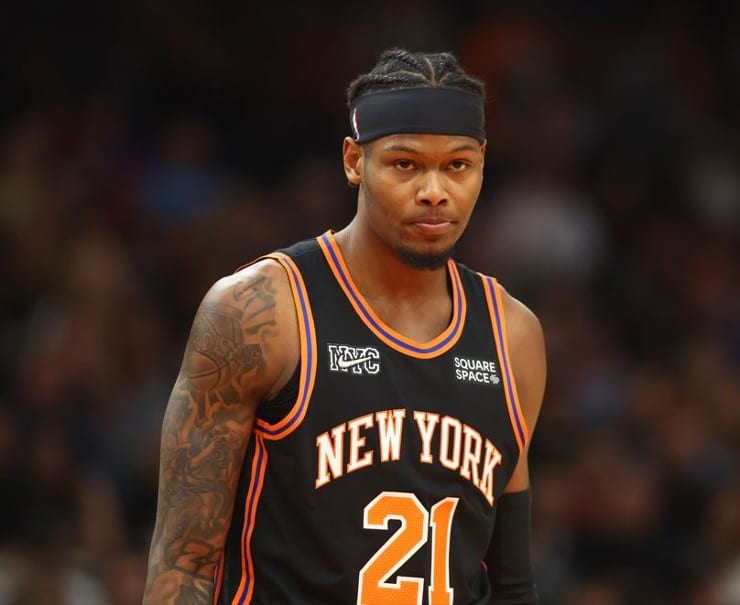 The New York Knicks are 11-13 so far this season which is fifth in the Atlantic Division and ninth in the Eastern Conference. In their 92-81 win vs the Cavaliers on Sunday night, fifth-year pro Cam Reddish did not see any playing time. It’s been a up and down season so far so him.

Reddish struggled in the preseason for New York and it was not looking bright for him. From 11/5-11/18 he started eight straight games for the Knicks and was playing the best he had early on. Now, he is seemingly being pushed out of the rotation by his head coach. Fans are wondering why Reddish he didn’t play at all on Sunday.

NBA betting sites have the Knicks at (+20000) to win the Finals this season.

Cam Reddish is expected to remain out of the Knicks rotation, per @SBondyNYDN pic.twitter.com/bf3dM3cVBT

Cam Reddish could be losing his spot in the Knicks rotation

He recently missed a few games due to right groin soreness. Before that, he was averaging (10.3) points, (1.8) rebounds, and (1.3) steals per game in the eight starts he made for New York. People are starting to wonder why Tom Thibodeau is leaving him out of the lineup completely. Quentin Grimes was Reddish’s replacement in the starting lineup. However, it’s very odd to see him be listed as DNP for Sunday’s game. Especially for a player who’s averaging (21.9) minutes per game this season.

Cam Reddish remains out of the rotation and the Knicks declined to make him available to the media. https://t.co/ldsB3yr6dn

In the Knicks win on Sunday vs the Cavaliers, Thibodeau used a nine-man rotation and Reddish was not apart of it. He did use Miles McBride in that rotation, a player who’s averaging just (6.8) minutes and (1.8) points per game. It was a “coaches decision” according to Thibodeau after the game.

The coach hinted after the game that he will be going with this rotation of players going forward. That could eave Reddish as the odd man out for New York. His name was mentioned in trade talks before the season has started, but it’s looking like Reddish may be entering a crossroads in his career and he may need to make an important decision.