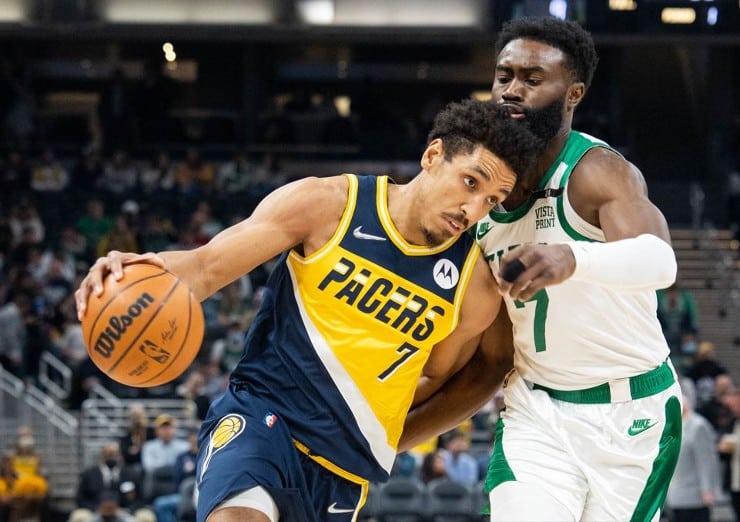 Boston Celtics guard Malcolm Brogdon is willing to embrace a sixth-man role on his new team. The Virginia product has been buddies with teammate Jaylen Brown for years.

When asked why he contacted Brown during the Kevin Durant trade rumors, the sixth-year player replied, “Like any human being, sometimes you want to be checked on to see how you’re doing, but that’s all I did with him.”

“Jaylen’s a confident guy and he understands this is part of the business as well. So, he’s a pro. He’s going to come back ready for training camp and ready to work.”

One of Brogdon’s goals in the NBA is to support his teammates. Not to mention, the 29-year-old enjoys helping struggling families and communities around the world.

Brogdon founded Hoops4Humanity, which is part of the Brogdon Family Foundation, in 2020. On the main website, the Celtics guard stated, “I want to be influential with my voice, I want to use it for good and I want it to help make change.”

The organization’s goal is to provide impoverished families access to clean water and quality education. Hoops4Humanity also strives to eliminate health, gender and education inequalities across the globe.

According to the site, about 800 million people lack access to clean water. The foundation aims to lower this statistic.

BFF has built sanitation centers, sports facilities, gardens and wells for communities abroad. Internationally, Tanzania and Kenya are two of his most visited countries.

On the importance of water, the Celtics guard released this statement: “Water has been and will always be the most vital resource that humans simply cannot live without.”

“Water is life and it is also life-changing,” continued Brogdon. “Being able to provide a transformative resource will not only impact the people of today but the generations of tomorrow.”

Brogdon will accept a sixth-man role with the C’s, while serving as a much-needed starter for philanthropist organizations. More news stories on Malcolm Brogdon and the Celtics are on the main page.