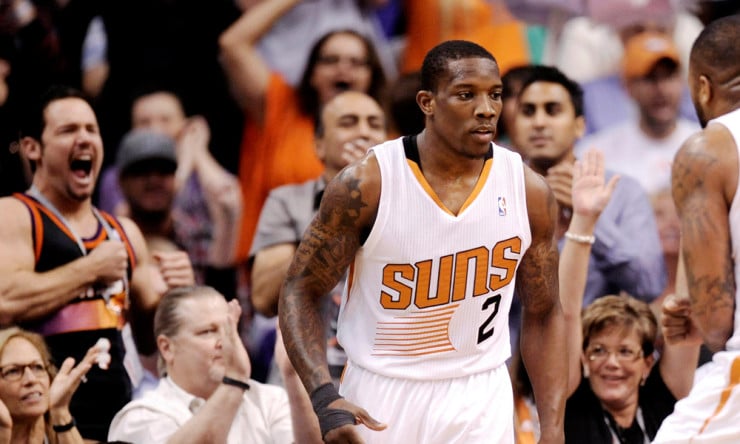 Steve Kyler: Five years and $70 million may sound like a lot and in the NBA it just might be, but for the Phoenix Suns this was a chance to secure a rising talent in restricted free agent guard Eric Bledsoe before he had the chance to walk away to another team and leave them with nothing in return.

There are a couple of things to consider with this deal.

The salary cap is going up. It’s going to go up a lot, so locking in Bledsoe into a deal that averages $14 million per season isn’t going to represent nearly as much as a percentage of cap space in two years as it does today.

The next part is that starting point guard Goran Dragic is headed to unrestricted free agency next year. There are no guarantees that he doesn’t walk away and if the Suns were to have lost both Bledsoe and Dragic and have nothing to show for it, that would be a devastating blow to a franchise on the rise.

Did the Suns overpay for Bledsoe? Maybe. Historically, the players who have taken less than a maximum offer as an extension have outplayed their deals. When you weigh Bledsoe’s injury history, there is clearly a reason to be concerned, but when you consider Phoenix played its best basketball last season with Bledsoe and Dragic on the floor together, the Suns are betting on a known commodity.

Suns head coach Jeff Hornacek likes to play small and with Bledsoe now locked up, you can expect to see him play more off the ball than on it and despite the hefty salary, the Suns have a solid backcourt, arguably one of the best in the NBA.

For a team that has really nothing to lose, this wasn’t the terrible deal some will make it out to be. It’s risky for sure, but the Suns couldn’t afford to lose Bledsoe and Dragic and now they have an entire season to judge whether paying Dragic in July makes sense.

This wasn’t the max deal Bledsoe was seeking, but it wasn’t the $48 million deal the Suns started with either.

In the end both sides got what they ultimately wanted, the price might be a million or two apart from where each wanted to be, but each got what they wanted and this isn’t a terrible deal.

Alex Kennedy: The Phoenix Suns and Eric Bledsoe finally reached an agreement on a new contract and will reportedly ink a five-year, $70 million deal. This is somewhat of a surprise to me, since it wasn’t long ago that the Suns were saying that they weren’t going to budge from their $12 million per year offer.

Honestly, I think it was mistake for Phoenix to give in and raise their offer for Bledsoe, considering the other point guards on their roster, the precedent it sets and Bledsoe’s history.

Paying Bledsoe $14 million per season doesn’t seem like the best use of the Suns’ money considering they have three other talented point guards under contract in Goran Dragic, Isaiah Thomas and Tyler Ennis. I get that Jeff Hornacek wants to use two point guards at a time, but it seems like this isn’t the best way for Phoenix to use their resources. If they were going to pay Bledsoe star-level money, they shouldn’t have given a four-year, $28 million deal to Thomas and used the 18th overall pick in the loaded 2014 NBA Draft to select Ennis. That money and draft pick could’ve been used to improve the supporting cast around Bledsoe, rather than going toward his backups.

I get that the salary cap is rising, but as Zach Lowe of Grantland recently pointed out, that shouldn’t be an excuse to throw money at a player.

“The future cap might make today’s bad deals look less bad, but it will also make sweet-spot deals look even better,” Lowe wrote. “Those deals are easier to move, and any team striving for greatness — not just pretty-good-ness — has to have flexibility to seize opportunities for an upgrade.”

Also, the next time that the Suns are negotiating with a free agent, don’t be surprised if that player tries to play hardball with Phoenix because they just watched the Suns’ brass give in and give Bledsoe a much bigger offer. This sets a precedent that could affect Phoenix in later negotiations because agents don’t forget these kind of things. It could even affect their negotiations with Dragic, who can become an unrestricted free agent after the season (and who may have deserved that money more given his excellent play last season).

Finally, there’s the biggest question: Is Bledsoe really worth $14 million per season? He has only been a full-time NBA starter for less than half of a season. He was productive during that time, but it’s not like he put up superstar-level numbers. Not to mention, this is the golden era of point guards, so replacing Bledsoe wouldn’t have been too difficult. Hell, his replacement might have already been on their roster.

Bledsoe’s injury history is also a concern. For someone who hasn’t been a starter very long, it’s scary that he has dealt with a number of significant injuries and has underwent two knee surgeries in four years.

I like Bledsoe’s game and I hope he can reach his full potential because he’s an exciting young player. However, this is a very risky deal for the Suns and it’s one they may regret in a few years.

Who do you agree with? Leave your thoughts in the comment section below.