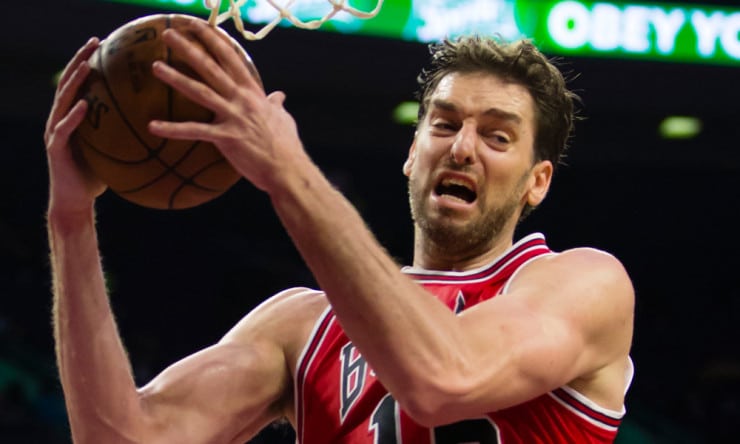 To have a shot at winning this series, the Chicago Bulls were eventually going to have to take a game in Cleveland, and they did precisely that in Game 1. The Cavaliers were clearly rusty after taking a week off, and they definitely struggled trying to find themselves in the wake of losing Kevin Love for the season.

All in all, the Cavs held their own and showed that they’re still a dangerous team, but the Bulls took care of business on the road and stole away a game that they’re probably going to need later on in this series.

Frankly, Chicago saw a lot of success shooting the ball in Game 1, and that contributed a lot to their win. They hit a ton of threes early (they were 6-for-8 at one point in the second quarter), but it’s not like they got especially hot; they were just getting open looks and guys were knocking them down. Beyond that, the screen-and-roll game between Pau Gasol and Derrick Rose worked to their advantage in a major way, getting Rose a lot of clean looks when Tristan Thompson switched over to him, and getting Gasol about a half a million wide open mid-range jumpers at the top of the key.

Jimmy Butler wasn’t as prolific on offense as he has been, but he had to check LeBron James all night and that would sap just about anybody. Despite that, he still hit a few really big shots down the stretch that helped the Bulls maintain their late lead. Joakim Noah still looks awful, but the rest of Chicago’s key players were on their game Monday night.

David Blatt and the Cavaliers will make adjustments in Game 2, and Chicago has to figure out how to at least slow down Kyrie Irving, but this was a good start for the Bulls. Another road win, and that will give them a pretty commanding 0-2 lead in a franchise-defining series.

From the very beginning, the Cavaliers came out flat in Game 1. The first quarter wasn’t pretty for them, as they got down by as much as 16 and really had to rally to break even by the midway point of the third quarter. It took them that long to right their early wrongs.

LeBron James had a reasonable stat line by the time the night was done, but he was nowhere near aggressive enough in this game. It looked like he was trying to get everybody else involved, facilitating more than attacking. That said, when he did get in close he made some questionable decisions and even missed some shots that he usually makes. Despite the huge all-around stats, he did have six turnovers and absolutely can be more effective. Cleveland needs monster games out of him if they’re going to win this series.

Kyrie Irving, meanwhile, was every bit the monster in Game 1, scoring at will against a Chicago defense that really had no idea what to do with him. You can bet that he’ll keep that up, but Cleveland needs more guys to step up than just The Big Two. Iman Shumpert had a good (if not efficient) scoring game, but Mike Miller, James Jones and Shawn Marion – the guys expected to help weather the losses of Kevin Love and J.R. Smith – didn’t really contribute all that much.

That means other guys are going to have to pick it up. This is a competitive team, so it’s easy to believe that someone will in Game 2, especially now that they’ve got some game film of the team without Love in the playoffs.

It’s hard to believe that Cleveland would drop the first two games of the series, especially playing at home. They’ll adjust, and the notoriously inconsistent Bulls will likely come back down to earth a bit, especially considering how many minutes the starters played in Game 1. It seems most likely that this series will head to Chicago knotted up at one game apiece.