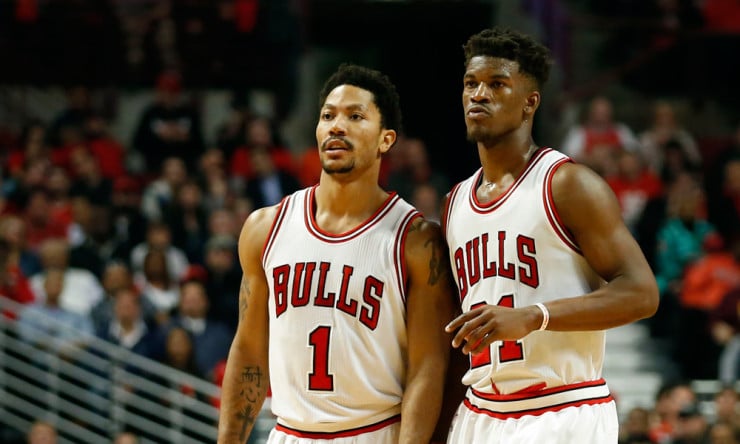 So much of this series hinged on what happened in Game 3, but for the overwhelming majority of that contest, nobody had any idea who would walk away with the victory. It was a hard-fought win for Chicago, and even though LeBron James had another awesome statistical game (27 points, 14 assists and eight rebounds), he was really frustrated by Jimmy Butler, missed a number of key shots and had a hard time taking care of the ball. He and Kyrie Irving were a combined 11-for-38 in the game, which is horrible, and that’s not even taking into consideration the fact that Irving didn’t have a single assist and that James had seven turnovers. That they only lost by three with those numbers is a miracle.

It also means they have hope for Game 4. J.R. Smith, for starters, was a huge shot in the arm offensively. As much as Iman Shumpert held things down while Smith was out, he’s not quite as prolific a scorer as Smith. He hit some really big threes down the stretch in Game 3, including the one that tied the game with just 10 seconds remaining. His offense helped, and truthfully, the other bit Cavaliers players did a nice job, as well; the bench guys hit 8-of-16 from deep. That kept it close.

That outside scoring will help them in the next game and since the Bulls could be without Pau Gasol, who left Game 3 with a hamstring injury, Chicago’s frontcourt issues might finally have evened out with Cleveland’s.

At the end of the day, though, Cleveland lost Game 3 because of an insane last-second shot by Derrick Rose. Game 4 should be another close one, and nothing we’ve seen so far suggests that any forks are being stuck into anybody just yet.

It was a huge night for Derrick Rose, who hit the shot of his life and finished with 30 points, seven assists and seven rebounds, but Jimmy Butler was the real MVP of this game. He gave LeBron fits all night long, causing him to make bad passes (James had seven turnovers) and miss a lot of shots. Butler also chipped in 20 points, so there’s that too.

Clearly Rose and Butler are the heart and soul of this team, but Tom Thibodeau made some interesting adjustments elsewhere in Game 3 by getting Nikola Mirotic some more minutes and keeping a struggling Joakim Noah out for the entire fourth quarter. Taj Gibson was hot, Mirotic was hitting shots and the Bulls even went really small at times without Noah or Gasol for the last part of the game. It worked in Game 3, and if those guys have any legs left, they’ll try to do more of the same in Game 4 on Mother’s Day, especially if Gasol ends up sitting out.

The team that wins Game 3 in a 1-1 series ends up winning the whole series an inordinate number of times, so this was a big win for Chicago. They’ll hope to keep LeBron on his toes in Game 4.

LeBron always gets one on the road, and let’s face it, this series is going seven games. Expect Cleveland to pull even in Game 4 as Rose and Butler are almost sure to be exhausted after huge efforts in Game 3. It should be even going back to Cleveland for Game 5.