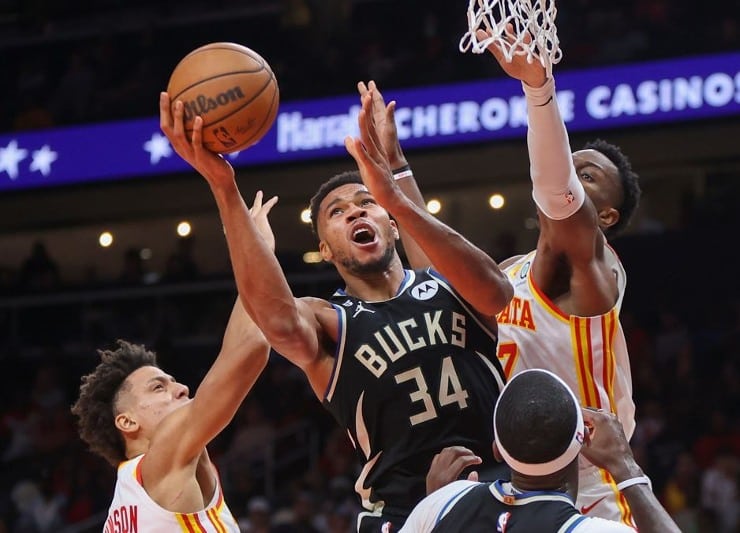 Milwaukee Bucks star Giannis Antetokounmpo has scored at least 30 points on 50% shooting from the field in each of his last eight games, joining Shaquille O’Neal and Amar’e Stoudemire as the only players in NBA history to accomplish this feat in eight or more games.

O’Neal, the retired Los Angeles Lakers legend, scored 30 points and shot 50% from the floor in 11 consecutive games in 2000. As for Stoudemire, the iconic New York Knicks power forward/center, reached nine straight games with 30-plus points on 50% shooting in 2010.

According to a few NBA betting sites, Giannis Antetokounmpo has the third-best odds to win MVP in 2023. Some sportsbooks show higher odds for Jayston Tatum and Luka Doncic.

Giannis Antetokounmpo has scored at least 30 points on 50% shooting from the field in each of his last eight games.

Only two players in NBA history have recorded a longer such streak:

On Oct. 22, in Milwaukee’s 125-105 win against the Houston Rockets, the Bucks forward scored a season-high 44 points in 28 minutes. In addition to amassing 12 rebounds and three assists, Antetokounmpo shot an impressive 17-of-21 (81%) from the floor.

In the Bucks’ 126-113 win over the Sacramento Kings on Wednesday, the Greek Freak ended his performance with 35 points, six boards, seven assists, and one steal in 33 minutes of action. He finished 12-of-19 (63.2%) shooting from the field.

With 4:40 remaining in the fourth quarter, the Milwaukee star scored on consecutive drives to give the Bucks a 117-105 lead. “Just keep making them make one extra pass, one extra drive and kick,” Giannis Antetokounmpo said of his fourth-quarter defense. ”We just tried to make it as tough as possible.”

For an added bonus, the two-time MVP is the first Bucks player to record 30-plus points in eight straight games since Kareem Abdul-Jabbar (March 6 to March 21, 1972). Bucks coach Mike Budenholzer is impressed by Antetokounmpo.

Over the last 8 games he's averaging:

”I like the way he’s playing with his teammates, the way he’s sharing it, the way he’s passing it,” Budenholzer said of Giannis Antetokounmpo. ”Organically, it comes back to him playing a little bit more off the ball, a lot of DHO’s [dribble handoffs] and stuff like that.

“He’s getting points, but I think he’s playing the right way and just taking what the game gives him and playing with his teammates.”

Furthermore, the Bucks next three opponents are the Dallas Mavericks (Friday, Dec. 9), Houston Rockets (Sunday, Dec. 11), and Golden State Warriors (Tuesday, Dec. 13). Milwaukee will play the Mavs and Rockets on the road.

Giannis Antetokounmpo fell short of scoring 30 points on the road in four separate games this season. Fortunately, none of the previous matchups involved their next opponents listed above.