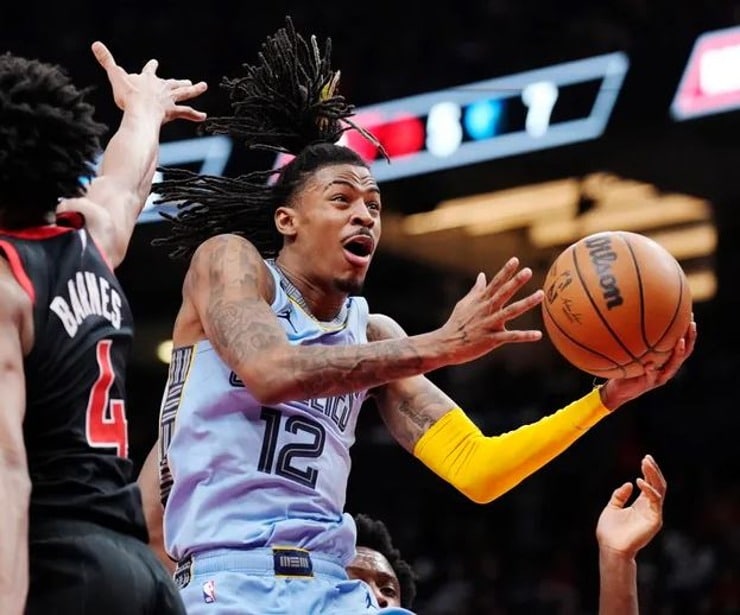 Memphis Grizzlies guard Ja Morant recorded a career-high 17 assists in a 119-106 win over the Toronto Raptors on Thursday night. The fourth-year player also ended his outing with 19 points, four rebounds, and one block in 36 minutes played.

He also shot 9-of-19 (47.4%) from the floor and knocked down one 3-pointer. Before this game, Morant logged 27 points, 10 boards, and 14 assists against the New York Knicks on Nov. 27. The guard has posted 12 double-doubles and three triple-doubles so far this season.

Based on a couple of NBA betting sites, the Grizzlies have the sixth-best odds to win the championship in 2023. Some sportsbooks are showing better odds for the Los Angeles Clippers and Phoenix Suns.

“It’s super impressive,” Grizzlies coach Taylor Jenkins mentioned about Morant’s 17 assists. “Tons of credit to Ja. It just sets a tone for us. His unselfishness, we talk about that all the time.” Per ESPN’s NBA database, Memphis is 13-1 this season when recording more assists than its opponent.

Through 29 starts this season, Morant is averaging 26.8 points and 1.0 steal per contest. Along with those statistics, the guard is logging career highs of 6.2 rebounds and 8.1 assists per game. Plus, he’s shooting 45% from the field and 32.7% outside the arc.

Equally important, this was Morant made his first career appearance at Scotiabank Arena. Because of a sprained left knee, the guard missed Memphis’ road game against Toronto last season. And the other two prior meetings were not played in Canada due to the COVID-19 pandemic.

Dillon Brooks led the Grizzlies in scoring on Thursday night with 25 points in 34 minutes of action. “I think they’ve been watching what’s all over the internet of him flying around, dunking on guys, putting on a show,” Brooks said of Raptors fans supporting Morant in Toronto.

The only jerseys we wanna see in tonight’s Grizzlies-Raptors game 🔥 pic.twitter.com/iskePEwxFz

“They were ready to watch, and he didn’t disappoint… He’s able to get three, four guys on him and find us for 3s, find us for dump offs. He’s a one-in-a-generation talent.”

Including this win, the Grizzlies are now 21-13 and rank third overall in the Western Conference standings. They trail the top-seeded New Orleans Pelicans and Denver Nuggets by one game.

Will Ja Morant finish in the top three for MVP votes this season? Several sportsbooks are giving Morant the seventh-best odds to win the award in 2023. At the moment, Dallas Mavericks superstar Luka Doncic is the clear-cut betting favorite, followed by Boston Celtics wing Jayson Tatum.