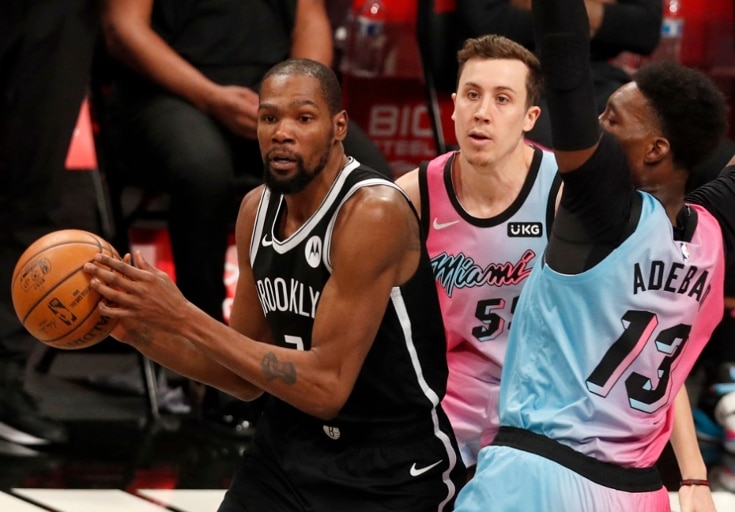 The Nets and Heat will meet at the Barclays Center on Thursday for an Eastern Conference matchup that the Heat should be able to win due to Brooklyn’s injuries. Miami has been incredible all year long while Brooklyn has struggled with Kevin Durant not playing. It’s to be expected that Durant could return on Thursday.

Brooklyn has struggled this season as they’re currently the 8th seed in the Eastern Conference. The Heat have been playing great basketball despite missing many players for most of the year. Miami is finally somewhat healthy and they’re showing what they can do with this team.

Kevin Durant of the Brooklyn Nets is expected to return sometime this week. It is questionable at the moment if he is going to play against the Miami Heat, but it seems likely that he is going to make his return against them.

Miami is going to be coming off a back-to-back as they are going to be taking on the Milwaukee Bucks on Wednesday. It isn’t going to be easy for Miami to win both of these games considering that they are arguably the other two top teams in the Eastern Conference besides Miami.

Below, we will take a look at players who are currently on the injury report for Thursday night’s game. The Heat could have some late scratches as they will be on a back-to-back.

The Miami Heat should be able to take care of business against the Brooklyn Nets on Thursday.

Miami is already 2-0 against them this year and with the way that Miami is currently playing, this should be a game that they do easily win due to the Nets’ injuries.

Miami has arguably one of the best defenses of all time as they currently have these sixth-best defensive rating in the NBA, but that doesn’t show just how good this team is defensively. Brooklyn has the 22nd ranked defense.

Miami has the seventh-best offensive rating in the NBA while Brooklyn is in the middle of the pack at 15th.

Coming Off A Back-To-Back

Although the Miami Heat have been playing great basketball this year, they are going to be coming off a back-to-back after they travel to Milwaukee on Wednesday.

Because they are coming off of a back-to-back, anything is really possible and we could see some guys with late scratches due to giving some of their players some rest.

It is still unclear at the moment if Kevin Durant is going to return for this Nets team after hurting his knee a few months ago.

There have been rumors that he is going to return potentially on Thursday. This would be a big addition to this struggling Nets team because when Durant was on the court, they were one of the best teams in the NBA, just like everybody expected.

For this Miami Heat against Brooklyn Nets game on Thursday, I’m going to go with Miami to win the game outright and the game to go under.

Miami has one of the best defenses in the NBA and if Kevin Durant is not going to a play for Brooklyn, there should be no reason why Brooklyn has any type of chance to score against this Elite Miami defense.

Get free NBA bets for the Heat vs Nets game at BetOnline below.