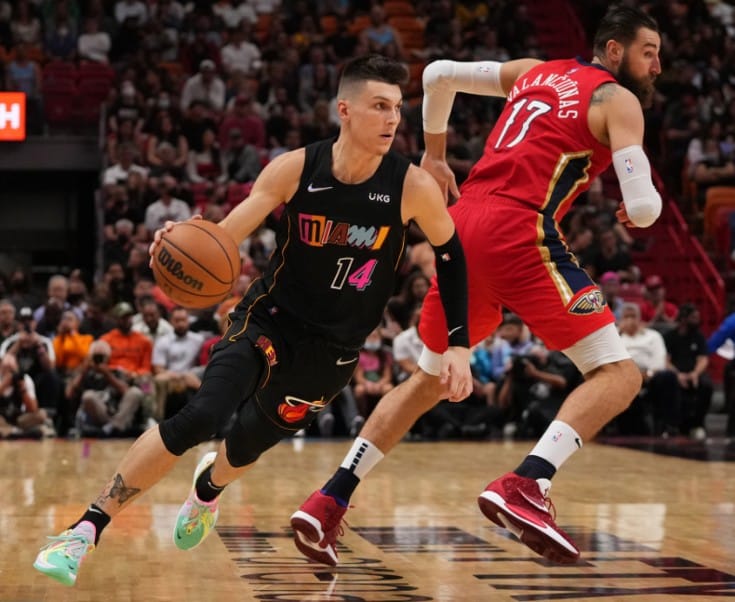 In tonight’s interconference rematch, the Miami Heat (35-20, 32-23 ATS) are playing the New Orleans Pelicans (22-32, 27-26-1 ATS); NBA picks are featured here. Which teams’ losing streak is coming to an end on Thursday night? Including the starting lineups, our top NBA picks and betting trends are posted below.

All Heat vs Pelicans betting odds can be found at BetOnline

Moreover, on Monday, in the Heat’s 121-100 road win over the Wizards, center Bam Adebayo led his team in scoring. He piled on 21 points in 24 minutes spent on the court. Forward Jimmy Butler closed out his performance with 19 points, 3.0 rebounds and 4.0 assists in 30 minutes played. Miami has won six of its last 10 games. In addition to their three-game winning streak, the Heat are now 17-14 away, 18-6 at home and 18-13 ATS on the road this season.

As for the Pelicans, in their 110-97 home win against the Rockets on Tuesday, forward Brandon Ingram scored a team-high 26 points in 34 minutes of action. Jaxson Hayes and Naji Marshall each ended their outings with 14 points. New Orleans has won six of its previous 10 contests. On top of their four-game win streak, the team is 12-13 at home, 10-19 away and 14-10-1 ATS at home.

Referencing ESPN’s Basketball Power Index, the Heat have a 64.5% chance of winning.

Regarding other head-to-head matchups, in the past three meetings, the Heat are a perfect 3-0 versus the Pelicans. On Nov. 17, 2021, the first time these teams met during this regular season, Miami won 113-98 at FTX Arena. The Pelicans have not defeated them since Mar. 6, 2020, when they won 110-104 at Smoothie King Center.

In other news, two acquired players are expected to play for the Pelicans tonight: Tony Snell and CJ McCollum. Both players are listed as probable on the injury report. When asked about playing alongside Tony Snell and Larry Nance, teammate Brandon Ingram commented, “Tony can defend and shoot from beyond the arc. Larry is a great defender, has good hands and can step out and shoot the three.”

Brandon Ingram on Tony Snell/Larry Nance: "Tony can defend and shoot from beyond the arc. Larry is a great defender, has good hands and can step out and shoot the three. They bring experience, energy and another dimension to our team where we can stretch the floor."

Additionally, entering tonight’s interconference rematch, Miami is a 5.5-point favorite. It should go without saying that New Orleans has several players out on the injury report. But, CJ McCollum is making his Pelicans’ debut tonight. In conclusion, pick the Heat to win, the Pelicans will cover the spread and the total will go under 216.5. If you have never placed a bet on an NBA game, skim through our handicap betting guide. Other NBA Picks are on the main page.