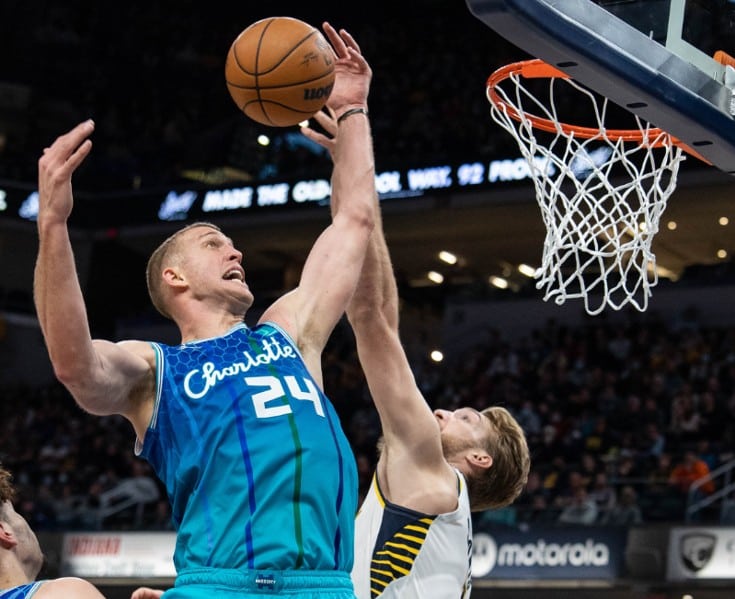 In tonight’s Eastern Conference rematch, the Charlotte Hornets (26-22, 29-19 ATS) are playing the Indiana Pacers (17-31, 24-22-2 ATS); NBA picks are available here. Which team will end their two-game losing streak? Including the starting lineups, our top NBA picks and betting trends are featured below.

All Hornets vs Pacers betting odds can be found at BetOnline

Furthermore, on Tuesday, in the Hornets’ 125-113 road loss versus the Raptors, guard LaMelo Ball led his team in scoring, putting up 25 points in 32 minutes on the court. Forward Miles Bridges closed out his performance with 22 points, 4.0 rebounds and 3.0 assists in 30 minutes played. Charlotte has won seven of its last 10 contests. Though, the team is currently on a two-game skid. They are 13-7 at home, 13-15 away and 14-14 ATS on the road this season.

Meanwhile, in the Pacers’ 117-113 road loss against the Pelicans on Monday, Duane Washington Jr. scored a team-high 21 points in 23 minutes of action. Guard Caris LeVert also contributed 19 points, 6.0 rebounds and 8.0 assists in 32 minutes played. Indiana has won only three of its previous 10 games. Similar to the Hornets, they are on a two-game losing streak as well. The team is 12-12 at home, 5-19 away and 13-10-1 ATS at home.

Per ESPN’s Basketball Power Index, the Hornets have a 59.2% probability of winning.

After viewing the outcomes of prior matchups, in the past five head-to-head meetings, the Hornets are a flawless 5-0 against the Pacers. On Dec. 29, 2021, the third meeting during this regular season, Charlotte won 116-108 at Gainbridge Fieldhouse. The Pacers have not defeated them since Jan. 27, 2021, when they won 116-106 at Spectrum Center.

In other news, in the Hornets’ victory over the Raptors, forward Miles Bridges earned his 25th 20-point game of this regular season. The fourth-year player has more 20-point games this season than he did throughout the first three seasons of his NBA career (24). In a total of 46 contests played this season, the 23-year-old has averaged 20.1 points, 7.3 rebounds and 3.5 assists per game.

.@hornets F Miles Bridges is up to 20 points at TOR, his 25th 20-point game of the season. Bridges now has more 20-point games this season than he did in the first three seasons of his career (24).#AllFly

To add to the information above, the Hornets are healthy for the most part. Oddsmakers believe Indiana will keep the score close against Charlotte at home. However, several bettors are taking the under. So, contemplate picking the Hornets to win, they will cover the spread and the total will go under 225.5. To learn more about sports betting, feel free to study our handicap betting guide. Other NBA Picks are on the main page.