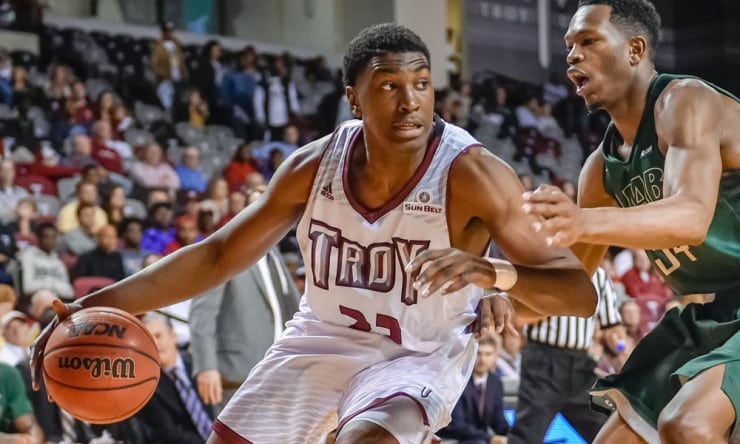 Last week, Troy forward Jordon Varnado hit a game-winning jump shot over Eastern Illinois. Not only did the sophomore step up when his team needed him the most, he made his presence felt all evening by filling the box score to the tune of 22 points, 10 rebounds, two blocks and two assists.

Shortly after the win, Varnado spoke with Basketball Insiders and was nonchalant. He didn’t exhibit any excitement about his monster performance or clutch shot. Coaches often tell players to “act like you’ve been there before” after an impressive win or play. Varnado has that down.

Varnado is one of the best kept secrets in college basketball, but the word will be out soon. He’s simply playing too well to continue flying under the radar.

Varnado is a 6’6 forward who can play inside and out. When asked which NBA players he watches and models his game after, Varnado doesn’t hesitate: “Draymond Green and Paul Millsap.” He studies those players because of their versatility, physical strength, ability to cause mismatches and the fact that they’re similar in size to him.

“My versatility is an advantage, no doubt,” Varnado said. “I can cause mismatches because I can go both inside and out. I take the bigger guy outside of the paint; if it’s a smaller guy, I can go right at him or shoot a jump shot. Offensive rebounding is a big part of my game; I like to crash the boards, make hustle plays, stuff like that.”

Another player with NBA experience has influenced him much more than Green or Millsap ever could, though. That’s because Jordon’s brother, Jarvis Varnado, was a second-round pick in the 2010 NBA Draft. Jarvis is the NCAA’s Division I all-time leading shot blocker, recording 564 rejections during his collegiate career at Mississippi State. Only two college players in history have recorded 1,000 points, 1,000 rebounds and 500 blocks in their career: Jarvis Varnado and David Robinson.

Jarvis is currently playing in Italy, but he had NBA stints with the Boston Celtics, Miami Heat, Chicago Bulls and Philadelphia 76ers. In fact, he has a championship ring because he was on the 2013 Heat team that defeated the San Antonio Spurs in the NBA Finals.

For Jordon, growing up with Jarvis helped him improve drastically as a player. Very few people can say that they spent their childhood honing their basketball skills against one of the best defenders in NCAA history. Jordon learned how to score in a variety of ways, leading to the versatile offensive arsenal we see today. It also increased his confidence. After all, he started to think, “If I can score on Jarvis, I can score on just about anyone.”

“It was great,” Jordon said. “Every day was a battle, ‘cause me and him used to go at it. We were very competitive. It was always a battle.”

Jarvis has been a huge asset for Jordon off the court as well, especially when it came time to pick a college and now that he is starting to get some NBA buzz. A big reason Jordon landed at Troy is because their head coach, Phil Cunningham, has ties to the family; he was an assistant coach at Mississippi State when Jarvis played there, and everyone in Jordon’s life felt that Coach Cunningham would do a great job developing him and preparing him for the next level.

Also, watching his brother’s career play out has given him an idea of what to expect each step of the way as he goes through his own process. Most players don’t have that luxury, and Jordon doesn’t take it for granted.

“It’s helped me out a lot because going into college, I knew what it would take to be a great player,” Varnado said “I knew the work ethic I had to have to succeed, what I need to do to make it to the next level.”

Varnado may not have a ton of buzz surrounding him now, but that’s sure to change if he continues playing at such a high level. Either way, Jordon will be in his own bubble and concentrated on the team’s success rather than his own.

“I haven’t realized it,” he said when asked if he’s getting more recognition lately. “I just tend to keep to myself, just focus on the task at hand and try to help my team win every game that we can.”

As if Varnado didn’t have enough motivation, he uses his lack of high school offers as an additional chip on his shoulder. He’s determined to make a statement to the teams that passed on him.

“So every time I go out on the court, whoever I play against, I just remember in my mind that they could’ve picked me and they didn’t. I just try to go dominate them.”