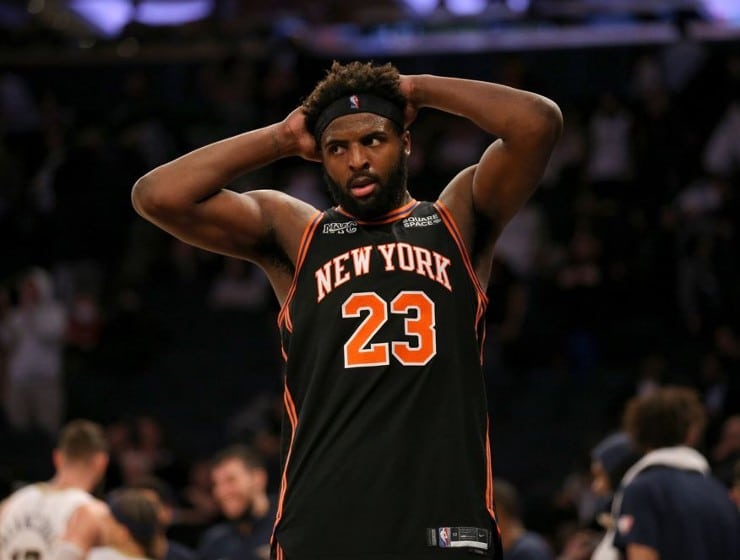 On Wednesday, New York Knicks center Mitchell Robinson questioned his team role on Twitter prior to having a standout performance in a 109-103 loss to the Milwaukee Bucks.

Robinson tweeted this message: “The way we play is not set for me to do any moves.” However, the center then ended his night with 15 points off 7-of-9 shooting and a season-high 20 rebounds in 33 minutes of action. It was his first double-double of the season.

According to some NBA betting sites, the Knicks possess the ninth-lowest odds to win the championship in 2023. Check out which sportsbooks show higher playoff odds for the Atlanta Hawks and Chicago Bulls.

Mitchell Robinson said this tweet was not because he's unhappy in his role: "If I was unhappy, I wouldn't be able to come out here and do what I did today, yesterday and last game. I would've just chilled out and just, oh well." https://t.co/OXRdbPEscM

After the loss, the center called his tweet “my business.” When asked if he felt disappointed with his role on the Knicks, Robinson replied, “If I was unhappy, I wouldn’t have [done] what I came out here and did today and last game. I would’ve just chilled out and just [said], ‘Oh well.'”

Mitchell Robinson is satisfied with role on Knicks, not unhappy with team

“From the last time we played [the Bucks], I had to come out with a different mindset,” Robinson added. “Last time we played them, I almost fouled out and I wasn’t myself. I had to learn from my mistake last game, and I brought it to this game.”

In the Knicks’ first meeting of the season against Milwaukee on Oct. 28, the center finished with five points, nine rebounds, and two blocks in 21 minutes. Giannis Antetokounmpo finished with at least 30 points and 10 boards in both matchups.

Nonetheless, Robinson kept New York in the game this time around. “He’s been really good. Defensively, he’s been terrific,” Knicks coach Tom Thibodeau said of his center’s dominating outing in the key.

“I think he’s starting to find his rhythm now offensively. We knew it would take some time. He adds a lot. He guards multiple positions, multiple-effort guy.”

During the offseason, Mitchell Robinson re-signed with the Knicks on a four-year, $60 million deal.