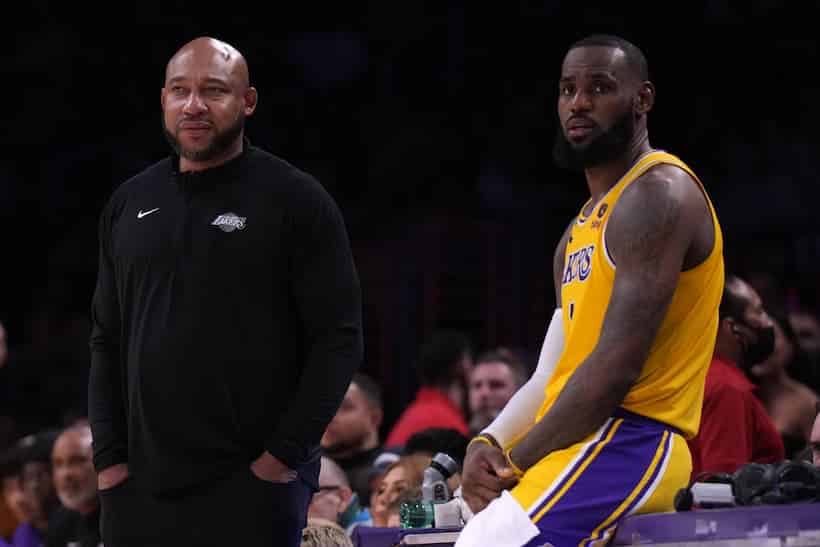 Lakers fans don’t like to hear it, but LeBron James is not the same player he used to be. It’s not because he’s lost his talent or can’t execute at the highest level. He’s battling father time as he just turned 38 years old. The four-time NBA champ can’t carry a team like he used to and the Lakers are in desperate need of Anthony Davis’ return. LA are fearful of over-working LeBron this season.

Since head coach Darvin Ham’s introductory press conference, he’s stressed the issue that he does not want to over-work LeBron. He said he wanted to sustain the wear and tear for him, but Anthony Davis being out for an extended  time has halted that as the Lakers try and keep their season alive.

With a 20-25 record at 13th in the Western Conference, California Sports Betting sites have the Lakers at (+2500) to win the Finals this season.

Lakers are worried about over-working LeBron James this year

Anthony Davis has now missed 20 games this season for the Lakers after Los Angeles played their 45th games of the season last night. In the 25 games he played, Davis was looking like an MVP contender for the Lakers. His injury however, has resulted in LeBron James playing extended minutes and it’s become a real “concern” according to Darvin Ham.

Since turning 38 on December 30, James is averaging 38 minutes per game and 25 field-goal attempts per game. Those high of minutes at this age are not ideal for LeBron no matter how good of shape he may be in. His head coach had this to say last night after the Lakers 116-111 loss to the Kings regarding James’ minutes.

“I feel bad about that,”… “He’s playing at an amazing level, but we can’t run him into the ground. That was one of my main goals coming into the season.” – Darvin Ham

James has 32/9/8 last night and no other Laker hit double figures. That’s not a recipe for winning games. It was reported earlier this week that Anthony Davis has resumed some light running this week and is eyeing a return in early February.