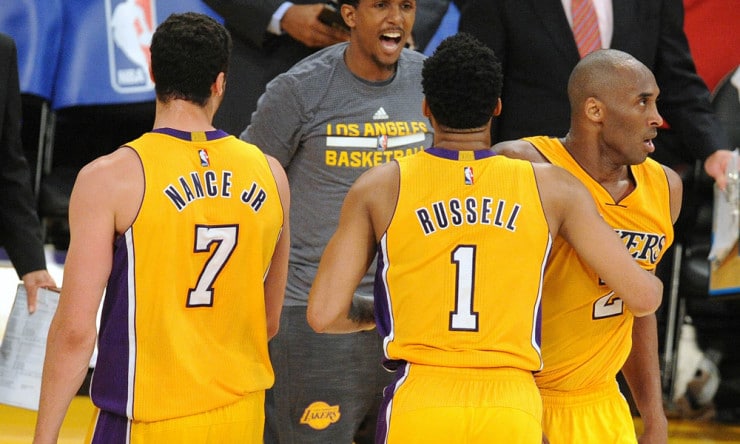 Out of respect for the Warriors, Lakers part owner and executive vice president of basketball operations Jim Buss was reluctant to talk about Walton at length, but was happy to praise him for his performance as Golden State’s interim coach earlier in the season.

“He was thrust into a situation.  People might say, ‘Anyone could coach Golden State with their roster.’  No you couldn’t have,” said Buss in a phone interview with Basketball Insiders.  “There’s a lot of pressure in that.  There’s a lot of preparation for that.”

Walton posted a 39-4 record while Steve Kerr was sidelined with a back injury.

“It seemed like he had an incredible handle on relationships with players – how to build them, how to build trust and culture,” Buss continued.

Eleven days after the Lakers’ 17-65 season, their worst in franchise history, the team let go of Byron Scott, whose 38 wins over two years with the franchise is one short of the number Walton won on Kerr’s behalf.

“It was a fair amount of time,” said Buss on Scott’s dismissal.  “There was a lot to go through before that decision was made.  I’m not going to have a knee-jerk reaction because everybody says, ‘You won 17 games, he’s got to go.’  I made a promise to sit with him and [general manager] Mitch [Kupchak] and give him a fair shake.”

While the Lakers were deliberating, Tom Thibodeau and Scott Brooks signed deals to coach the Minnesota Timberwolves and Washington Wizards, respectively. Neither was higher than Walton on the Lakers’ list of candidates.  An excellent interview sealed it, and Walton was hired the following day.

Of course, Walton will be joining the Lakers without All-Stars Stephen Curry, Klay Thompson and Draymond Green.

Instead, the Lakers have developing prospects D’Angelo Russell, Julius Randle and Jordan Clarkson.  Clarkson will be a restricted free agent in July, but the team expects him to re-sign.

“There’s five to me – solid, core players we can work with and build on,” said Buss.  “I like Marcelo [Huertas], I think in the right system he might be a good fit.”

Huertas, who just finished his rookie NBA season as a 32-year-old after playing most of his career overseas, can also be a restricted free agent this summer.

Buss was also happy with veteran big man Brandon Bass, who may opt out of $3.1 million owed for the 2016-17 season to explore free agency.

“And Tarik Black, I like him.  He could be a rotational player,” said Buss of the second-year forward, yet another potential restricted free agent.

The next milestone for the Lakers will be on May 17, when the NBA holds its draft lottery.  The team has a 55.8 percent chance at a top-three pick, otherwise their selection will convey to the Philadelphia 76ers to close out the Steve Nash trade.

Walton may get help in the draft, perhaps with a forward like Ben Simmons of LSU or Brandon Ingram of Duke.

“Right now, I think our young guys are the perfect number and we will add solid veterans,” said Buss.

With Kobe Bryant retiring, Roy Hibbert’s contract coming off the team’s books and the NBA’s salary cap jumping this summer from $70 million to a projected $92 million, the Lakers could have in the neighborhood of $60 million in spending power.

The top free agents will be Kevin Durant, who is unrestricted, and LeBron James, who can opt out his contract with the Cleveland Cavaliers.  Either would be a boon to the Lakers, but neither should be expected.

Other quality free agents include guards DeMar DeRozan and Mike Conley, big men Hassan Whiteside, Al Horford and Joakim Noah, and forwards Nicolas Batum, Ryan Anderson, Kent Bazemore and Chandler Parsons (who has a player option with the Dallas Mavericks) among others.

Buss hopes the Lakers will have greater success in persuading players to sign, compared to the past couple of summers, when the team could only boast unproven rookies and an aging Bryant.

“In the last two years, we had nothing to sell,” said Buss.  “Trust me, it’s a whole different feeling when you walk into one of those pitches and we have a lot [more on the roster and cap room to add additional talent].”

The Lakers could have started the rebuilding effort after Bryant tore his Achilles’ tendon in April of 2013.  Instead, the team awarded their long-time All-Star with a two-year, $48.5 million contract extension.

“We could have expedited the rebuild, but I have no regrets,” said Buss of the Lakers’ decision to pay Bryant.  “We have a tradition here of taking care of our players.”

Meanwhile, the rival Boston Celtics pulled the plug on their championship core earlier, dealing Paul Pierce and Kevin Garnett to the Brooklyn Nets in June of 2013. The Celtics are well ahead of the Lakers, winning 48 games this past season before falling in six games in the first round of the playoffs to the Atlanta Hawks.

“Boston did a great job because they also got a young coach that got to grow with their guys,” said Buss of head coach Brad Stevens.  “When you have a coach that can grow with you, that’s pretty nice.”

That’s what the Lakers believe they have in Walton.

Buss also hopes the Lakers will be well past this rebuilding stage soon thanks to their young core and the pieces they add this summer (be it through the draft, free agency or trades).

“That’s bottom,” said Buss off the team’s most recent campaign.  “Seventeen is the low, that’s for sure.”

The Lakers originally drafted Walton as a forward out of Arizona in 2003 with the 32nd overall pick.  He spent over eight seasons with the Lakers, winning two NBA titles.

At just 36 years old, Walton is younger than a sizable list of active players including Tim Duncan, Dirk Nowitzki, Vince Carter, Manu Ginobili, Jason Terry and both Pierce and Garnett.

It’s a leap of faith for Walton, just as it is for the Lakers, but the team is confident they’ve made the right hire.

Now it’s up to Buss and Kupchak, armed with more cap room in July than any other franchise, to build a roster that Walton can develop into a contender.