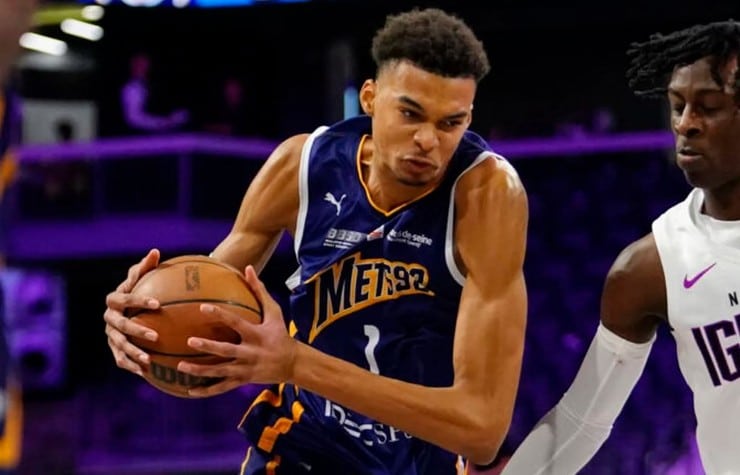 “Uh, what do I think about him? I probably think the same as what everybody else thinks,” explained the 18-time All-Star. “Um, everybody’s been a unicorn over the last few years, but he’s more like an alien.”

Per multiple NBA betting sites, the Lakers have top-10 odds of winning the championship in 2023. Feel free to compare the sportsbooks’ odds.

“His ability to put the ball on the floor, shoot stepback jumpers on the post, stepback threes, or block shots… He’s truly a generational talent. Hopefully, he continues to stay healthy.”

In June, Wembanyama signed a two-year contract with Metropolitans 92 of the LNB Pro A. On Tuesday, in Metro’s 122-115 loss to the NBA G League Ignite, the French star ended his performance with 37 points, 4 rebounds, and 5 blocks. He shot 7-of-11 from 3-point range.

Additionally, he scored 34 points in September against Darussafaka, a professional basketball club based in Istanbul, Turkey. LeBron James admitted that he enjoys watching him play.

In an interview with ESPN, the 7’3″ phenomenon discussed his goal of becoming one of the greatest basketball players of all time.

“I’m gonna tell you something that’s been going on in my life, like for my whole life, since I’ve been a kid, even before I played basketball,” Wembanyama told ESPN.

On October 29, 2019, Wembanyama made his debut at the professional level with Nanterre 92, a basketball club based in Nanterre, France.

In a matchup against Brescia in the EuroCup, the forward/center became the second-youngest player behind Stefan Petković to appear in the EuroCup. Wembanyama was only 15 years, nine months, and 25 days old.

In June 2021, the Frenchman signed a three-year contract with ASVEL of the Pro A and EuroLeague. Through 13 appearances in the EuroLeague during the 2021-22 season, Wembanyama averaged 6.5 points, 3.8 rebounds, and 1.9 blocks per contest.

On April 3, in the ASVEL’s 85-65 win against Le Portel, the forward/center scored a career-high 25 points.

While in the LNB Pro A, Victor Wembanyama averaged career highs of 9.4 points and 5.1 rebounds per game in 16 appearances. Not to mention, he shot 47.3% from the floor.

He went on to win his second LNB Pro A Best Young Player award.

Furthermore, ASVEL finished as the top seed of the league’s 100th season. They also won their 21st title in club history. After the season, Wembanyama opted out of his contract.

Talent recognizes other talent. If asked, LeBron James will speak his mind about any player. Victor Wembanyama could very well be a generational player.