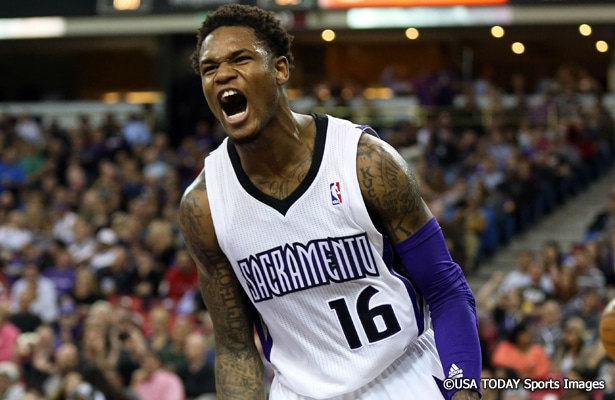 Ben McLemore wasn’t born yet when Dee Brown won the Slam Dunk Contest in 1991. He didn’t have to see the performance live to know 23 years later the former champion would still have plenty of tricks up his sleeve.

Lucky for McLemore, Brown is on the Sacramento Kings coaching staff and more than willing to share his secrets of success with the 2014 Sprite Slam Dunk Contest participant. He is still remembered for his show-stealing no-look jam and “pumping up” his Reebok kicks.

“I saw the dunks he did and they were unbelievable. Just coming from a champ, I could get a lot of good advice from him,” McLemore recently told Basketball Insiders. “He told me just to go out there and have fun. I wanted him to be there too, but I’ve been asking him and he told me to work on some things to be prepared.”

On Saturday night McLemore will compete against Paul George, John Wall, Harrison Barnes, Damian Lillard and reigning champ Terrence Ross during NBA All-Star Weekend in New Orleans. The 6’5 rookie guard has wanted to compete in the contest since he was a child. He was thrilled to be invited to participate after he was not selected for the BBVA Compass Rising Stars Challenge.

McLemore is a fan of 360-degree dunks, but thinks there are other factors involved in an attention-grabbing jam. Does this mean he will pay homage to his dunk mentor? Not exactly, although he will incorporate certain elements.

Not only is McLemore inspired by Brown, he also chose him as the former dunk champion he would most like to compete against for the title.

“I think I could take him,” McLemore said with a smile. “You’ve got Michael Jordan, Dominique Wilkins, all those guys, but watching Dee Brown he did a lot of that crazy stuff and I like his dunks that he did.”

Who will McLemore establish himself as in the dunk contest this year?