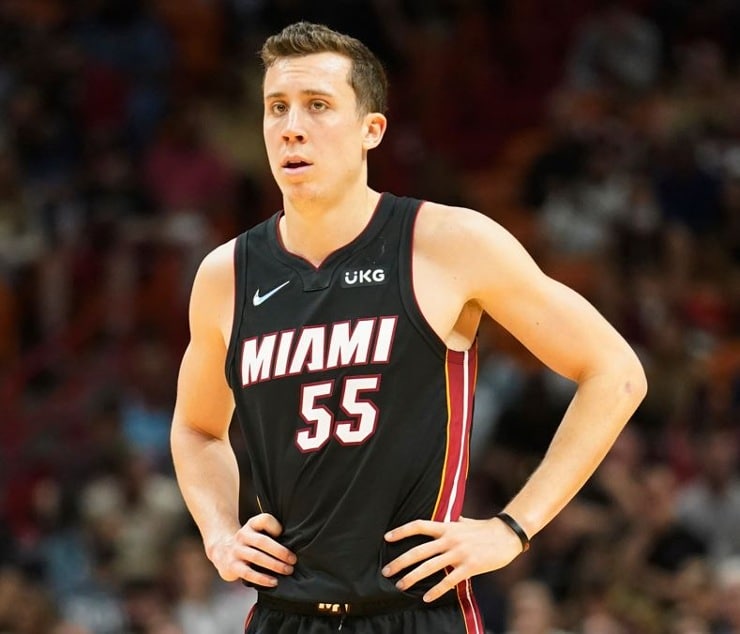 The Miami Heat have had a season riddled with injuries across the board so far with a number of their top players missing time. Despite that, Miami are still a float in the Eastern Conference with a 19-18 record. That is seventh in the East. Two seasons ago, the Miami Heat signed Duncan Robinson to a five-year, $90 deal, but NBA insiders urge the Heat to ditch Robinson for a “win-now” player.

Ever since he signed that deal, he’s gotten worse and worse in the following season. All his numbers have decreased and his spot in the rotation has lessened each season as well. The best thing for Robinson’s career right now may be a change of scenery.

Florida Sports Betting sites have the Heat (+4000) to win the Finals this season.

Business resumes with a few days in the City of Angels 🏀 pic.twitter.com/PZXKRAJDFL

Could Duncan Robinson’s time in Miami be coming to an end?

Almost all of Robinson’s stats this season are the lowest of his career since his rookie season in 2018-19. He’s averaging (7.2) points, (2.0) rebounds, (1.2) assists, (18.4) minutes, and (6.3) field goals attempted per game. It’s crazy to think of a time where he was shooting 45 percent from behind the arc for a season where he played in 72 games. Now, he’s struggling to get consistent minutes in the lineup.

NBA insiders note that Robison’s trade value is extremely low at this point. Andy Bailey of Bleacher Report had this to report on the matter.

“Still, if he was attached to the right assets (like a draft pick and/or Nikola Jović), his $16.9 million salary could go a long way toward salary-matching in a deal for a real difference-maker,” – Andy Bailey

It would be incredibly tough to ship Robinson out on his own. That is why a player like Nikola Jovic or a future draft-pick could be the ideal way to make a trade happen. Head coach Erik Spoelstra is said that Jovic is “very coachable” and he’s still got that raw talent another team could build upon. As for Robinson, his time with the Heat is likely on it’s final chapter.