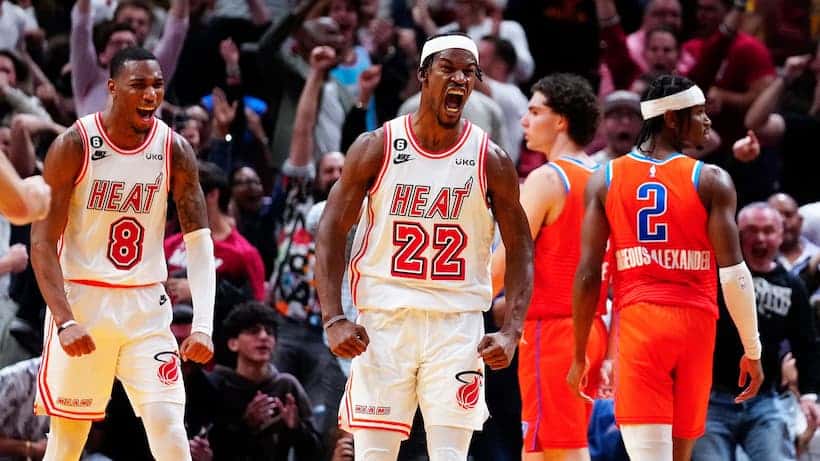 The Miami Heat hosted the Oklahoma City Thunder last night in a prime-time matchup on TNT. It went back and fourth all game long as the Thunder kept trying to cut into the lead the Miami Heat had for the first half. Some fourth quarter heroics from Jimmy Butler and the Miami Heat setting an NBA record last night were just enough for the Heat to escape with a close win.

As a team last night, the Heat went a perfect 40-40 from the free-throw line to set a new NBA record. Miami were missing four key starters last night, but their role players stepped up to help the tea edge out a narrow victory vs the Thunder. Josh Giddey’s triple-double wasn’t enough to stop Jimmy Butler and the Heat.

Florida Sports Betting sites have the Heat at (+3500) to win the Finals this season.

Broke the NBA record by going a perfect 40-40 at the free throw line.

With 12.9 seconds left in the game, Jimmy Butler drew contact and made the basket. He would have the chance to put the Heat up by one point and possibly set a new NBA record for most free-throws made in a game without a miss in a regular-season game. Butler took the final free-throw and you could see that he was unsure if it would go in. The shot was perfect and it would be a fitting end to a historic night for the Miami Heat.

The previous record for most free-throws made in a regular season game were as follows.

Miami’s long-time head coach Erik Spoelstra had this to comment about his teams record-setting performance on Tuesday.

“It’s just a normal Tuesday night for the Miami Heat,”… “I think this is when we feel most alive, when everything just happens and when all of our competitive juices get out there. That’s the team we all can relate to. That’s the team I like.” – Erik Spoelstra

Not playing for the Miami Heat in their game last night were Bam Adebayo, Kyle Lowry, Tyler Herro, and Caleb Martin all due to injury. Jimmy Butler had no problem stepping up and being the anchor the team needed. He had a historic night himself as he went 23-23 from the free-throw line and his last attempt being nailed for the game-winner. James Harden and Dirk Nowitzski are both tied for the record most free-throws made without a miss by a single player in one game going 24-24.

It was a complete team effort by the Heat last night and it took everything they had to get the win. All OKC’s head coach Mark Daigneault could do was give his praise for the outstanding game Miami had. The Heat were down 111-106 with under a minute and thirty seconds left and would score the final six points for a 112-111 win.