Why Would The Hawks Look At Deals?

It should come as no surprise that the Atlanta Hawks are kicking the tires on what’s possible in trade as the February 18 deadline approaches. The Hawks are not the team they were a year ago and they face some tough choices this summer regarding the direction of the team.

It is important to state that at this point in the NBA season, virtually every team in the NBA is talking about something; that’s the nature of the due diligence process all teams go through before the deadline. Talking about deals does not equate to a willingness to consummate one. So let’s keep that front and center.

The biggest question facing the Hawks is the future of big man Al Horford. He is headed toward unrestricted free agency and what could be a maximum starting salary that could be as high as $25.5 million, depending on where the salary cap ultimately lands.

The Hawks have to decide if their future is better served keeping Horford, a huge part of the team’s identity, or using that cap money elsewhere. There is also the question of whether Horford would want to stay in Atlanta or explore his free agent options, something the Hawks have no real control over.

If the Hawks decide Horford is not in their future, then things get interesting. What does he return in a possible trade? Or are the Hawks better off playing out their year, making a playoff run and using the cap space he could create in July?

With Horford off the books, the Hawks project to have roughly $25.9 million in usable cap space, assuming the final 2016-17 salary cap comes in at the expected $90 million mark.

While that’s a hefty number, it’s really just a single maximum salary slot to replace a huge chunk of the team.

This is where the rumors of the Hawks shopping point guard Jeff Teague come into play. If the Hawks have decided that Horford is likely gone in July, then a top down rebuild may be necessary. Teague could return a ton of value, not only in a final run with Horford on the team this season, but also in shedding Teague’s $8 million 2016 salary.

Teague has not exactly played to his All-Star form from last season and he and guard Dennis Schroder seem to be battling for the same job. Going forward, Schroder might be the better long-term answer as the starter and Teague could return a lot in trade, especially around the deadline or even the 2016 NBA Draft.

The other wrinkle is the fate of big man Tiago Splitter, as he too carries a hefty 2016 cap hit worth $8.55 million and hasn’t been great since arriving in Atlanta.

There are two schools of thought from league sources, the first being if the Hawks opt to move Teague then they may try and force Splitter into the deal. Moving off both Teague and Splitter, along with a free agent departure of Horford, could get the Hawks to over $49.2 million in usable summer-of-2016 cap space.

The second thought is that if the Hawks know they are losing Horford, then Splitter could take his place at a far cheaper price. Hanging on to Splitter changes the cap space math a bit, pushing the usable space from $49.2 million without him to $41.26 million with him.

The Hawks have been pretty adamant that they are simply doing due diligence and that nothing is close to happening. However, the math in all of it suggests that if the Hawks are not certain about their future, exploring and ultimately consummating change may be an inevitability, especially with the team sitting roughly three games above the .500 mark and having lost five of their last 10.

Here are the Atlanta Hawks’ salary cap scenarios for July 2016: 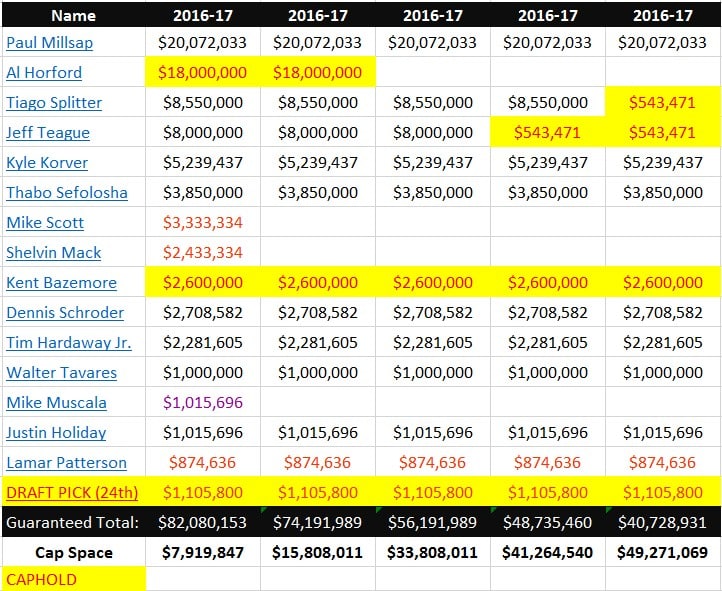 ** The $543,471 caphold noted is what’s called an Incomplete Roster charge. It is added to ensure that every team accounts for 12 roster spots worth at least the veterans minimum.

Miami Has a Cap Problem

The Miami HEAT have endured a crazy string of injuries, but are finally starting to get some of their guys back. Out of necessity Miami has had to lean on their bench at ton, which may end up being a blessing as they ponder which guys to keep going into the offseason.

The HEAT face some tough choices, mainly because of the enormous $30 million cap hold on Dwyane Wade. He literally has to be the first order of business for the HEAT, as his hold consumes almost all of Miami’s possible spending power.

Last year, retaining Wade beyond this season seemed unlikely, but given how well he’s played, signing him to a new deal under the rising salary cap might not be as crazy at it seemed a year ago, especially if the HEAT can work something out to keep the cap impact fairly low. Wade is making $20 million this season, the question is how much is he going to command next season?

The HEAT’s other big issue is the situation surrounding big man Hassan Whiteside. Unlike most players in his situation, Whiteside is going to be an unrestricted free agent without full Bird Rights.

As a second year HEAT player, Whiteside does qualifying for Early Bird status, but that only allows Miami to exceed the salary cap to offer him the greater of 175% of his $900,000 current salary or 104.5% of the average salary this season. The 104.5% number comes in at just over $5 million. Whiteside is eligible for higher raises in any deal he signs with the HEAT, which could be a small advantage. The problem for Miami is that both Early Bird values are far below what most believe is Whiteside’s market value to be. A near-max deal is more likely for Whiteside.

Because Miami does not have the means to exceed the salary cap to re-sign Whiteside to a market value deal, they must fit him into their cap space. Here is the wrinkle: Until the HEAT resolve Wade’s free agency, they won’t have any real cap space as every team has to account for at least 12 roster slots with either a cap hold or a contract. Wade’s cap hold kills their cap space, until he is signed to a lesser deal, signs elsewhere or is renounced.

The other part of the puzzle is Whiteside is eligible for a maximum contract with a starting salary expected to be north of $20.5 million.

If the HEAT have to meet that kind of number due to market demand, that means Wade has to agree to a deal in the ballpark of $16 million for next season. Or, said another way, take a sizable pay cut.

The HEAT do have the means to hang on to guys like guard Tyler Johnson, as he’ll be a restricted free agent, and the HEAT can exceed the cap to keep him. But keeping guys like Gerald Green becomes tough unless he’ll re-sign for a similar minimum-value deal.

The underlying issue with all of this is that even in a best-case scenario, Miami has the means to keep this team together, but the problem is they won’t have much available to add to the team as all of their usable cap space may have to go to Whiteside.

Here are the Miami HEAT’s salary cap scenarios for July 2016: 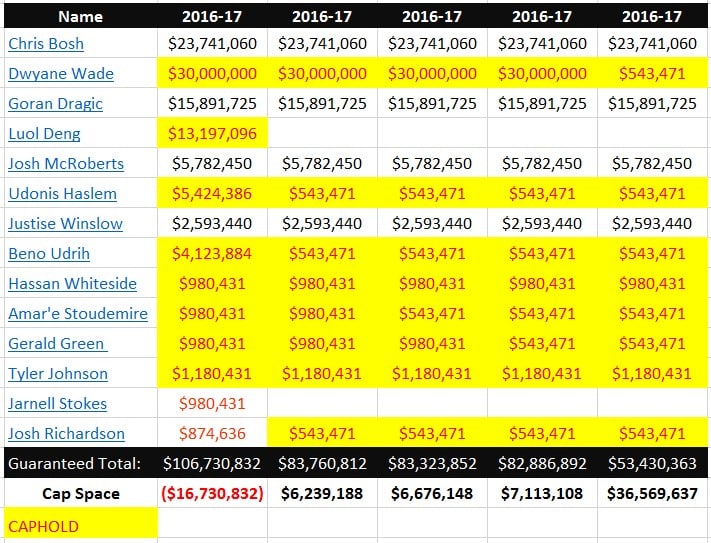 »In Related: Who still has cap space? How about cap exceptions? Check out the 2015-2016 NBA Salaries tool. The most accurate salary data anywhere.