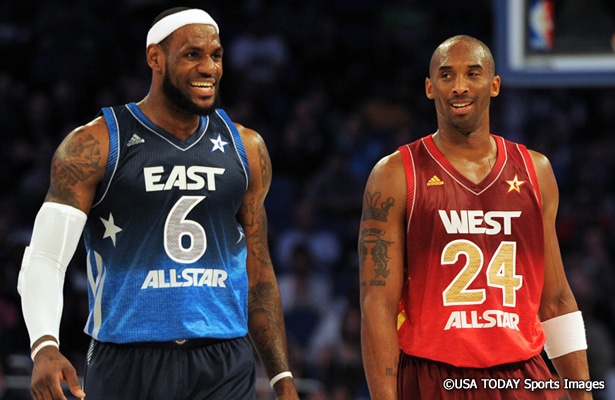 The Los Angeles Lakers’ Kobe Bryant, playing in his 20th and final NBA season, was selected to be an All-Star for the 18th time after the final results of NBA All-Star Voting 2016 presented by Verizon. Bryant, a four-time All-Star Game MVP and the top scorer in the game’s history, led all players with 1,891,614 votes to finish ahead of the Golden State Warriors’ Stephen Curry (1,604,325), who earned his third straight starting nod.

The Oklahoma City Thunder’s Russell Westbrook and the San Antonio Spurs’ Kawhi Leonard were voted starters for the first time.  This is the first All-Star berth for Leonard, who joins Michael Jordan and Hakeem Olajuwon as the only players in NBA history to be named an All-Star, Finals MVP and Kia NBA Defensive Player of the Year.  Joining Bryant, Curry, Westbrook and Leonard in the Western Conference starting lineup is Oklahoma City’s Kevin Durant, an All-Star for the seventh time.

The Toronto Raptors’ Kyle Lowry, who trailed the Cleveland Cavaliers’ Kyrie Irving by 32,285 votes for second place among Eastern Conference guards in the previous balloting update, surged to a starting spot for the second consecutive season.  Lowry (646,441) finished second among East guards behind the Miami Heat’s Dwyane Wade (941,466), who was picked to be an All-Star for the 12th time in 13 seasons.

The Cleveland Cavaliers’ LeBron James led the East with 1,089,206 votes to secure his 12th All-Star nod in 13 seasons.  James, whose 278 All-Star points are two behind Bryant’s record of 280, is joined in the East frontcourt by the Indiana Pacers’ Paul George (711,595) and the New York Knicks’ Carmelo Anthony (567,348).  Anthony edged the Chicago Bulls’ Pau Gasol by 360 votes to earn his ninth trip to the All-Star Game.  George, also chosen to start in 2014, clinched his third All-Star selection.

The 65th NBA All-Star Game will tip off on Sunday, Feb. 14 at Air Canada Centre in Toronto, the first All-Star Game to be held outside of the U.S.