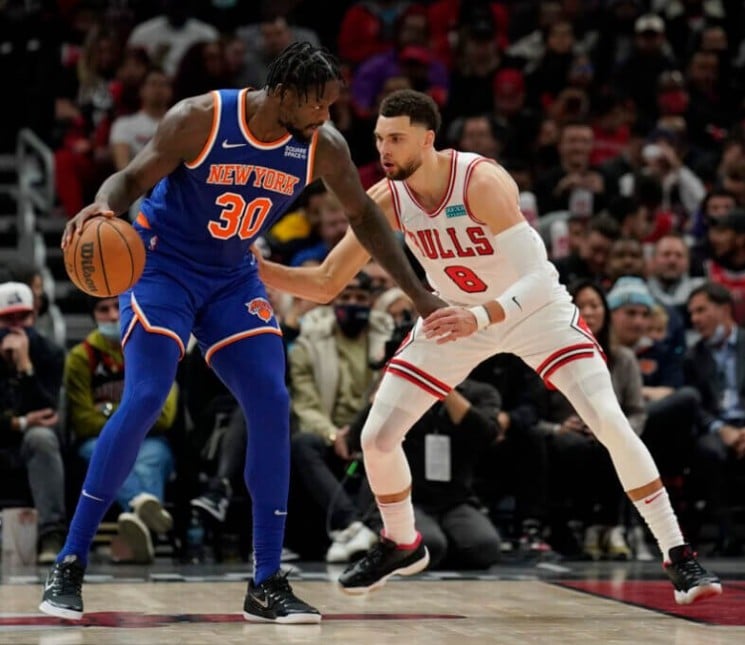 In tonight’s intraconference battle, the Chicago Bulls (14-8) are facing off versus the New York Knicks (11-10) at Madison Square Garden. Can Julius Randle and the unpredictable Knicks upset the Bulls in the Big Apple?

Leading into tonight’s Eastern Conference contest, the Bulls are 14-8 against the spread in the 2021-22 NBA season, whereas the Knicks are 10-11 against the spread. This thriller in New York airs live at 7:30 p.m. ET via MSG Network, NBA League Pass, NBA TV, NBC Sports Chicago and MSG+. Retrieved from Land of Basketball’s database, these two contenders have played 237 regular season games all-time against one another. Overall, Chicago is 125-112 versus New York. However, the Knicks are 7-3 against the Bulls in their past 10 head-to-head meetings. On Nov. 21, 2021, Chicago won 109-103.

The NBA announced today that the Chicago Bulls and Miami Heat violated league rules governing the timing of this season’s free agency discussions. Both franchise must forfeit their next available second-round draft pick.

Moreover, in the Bulls’ 133-119 win over the Hornets on Monday, center Nikola Vucevic added another double-double to his career total, finishing with 30 points, 14 rebounds and 5.0 assists in 35 minutes on the court. Forward DeMar DeRozan contributed 28 points, 5.0 rebounds and 6.0 assists in 34 minutes of action as well. By the end of this contest, the Bulls outscored the Hornets 56 to 44 in the paint.

Meanwhile, on Tuesday, in the Knicks’ 112-110 road loss against the Nets, guard Alec Burks ended his night with 25 points, 5.0 rebounds and 5.0 assists in 39 minutes played. Forward Julius Randle had 24 points, 9.0 rebounds and 8.0 assists in 40 minutes spent on the court, too. Statistically, the Knicks played a better game than the Nets.

For helpful betting trends, the Bulls are 3-7 ATS in their last 10 performances. The total has gone under in 13 of the team’s previous 19 games against Eastern Conference opponents. Plus, Chicago is 3-7 straight up in the team’s past 10 contests versus New York. Next, the total has gone under in 11 of their last 14 games versus Atlantic Division opponents, and they are 2-4 SU in their past six matches played in December.

As for the Knicks, they are 5-1 ATS in their previous six performances this season. To add to these betting trends, the total has gone under in nine of their last 11 games this season. Also, the total has gone under in five of New York’s prior five matches against Chicago. Lastly, the Knicks are 7-13 SU in their previous 20 games played in December. In short, the Bulls are the superior option. Pick them to win and cover the spread.

Pick the Bulls to win, they will cover the spread and the total will go over 211.5. Chicago is a two-point favorite with BetUS.