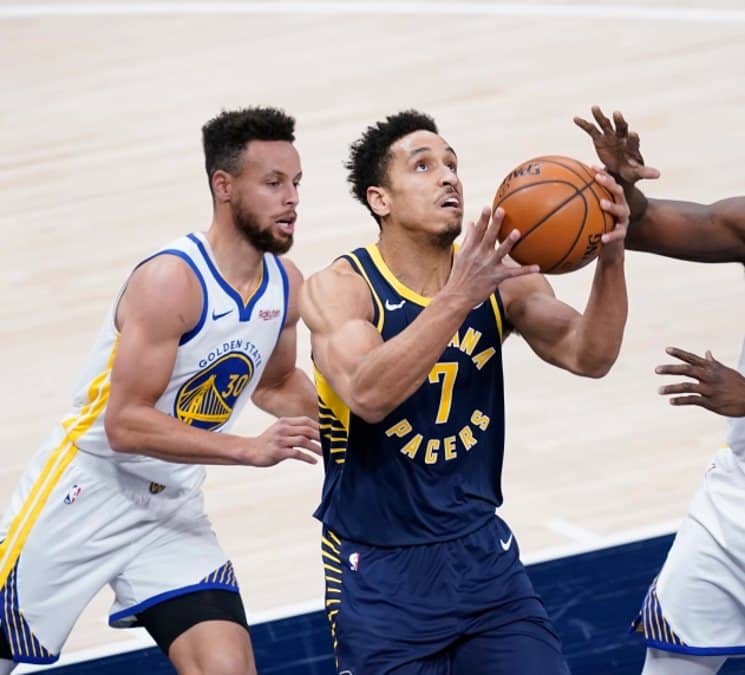 In Monday night’s interconference clash, the Golden State Warriors (21-5) are playing the Indiana Pacers (12-16) at Gainbridge Fieldhouse. Will Malcolm Brogdon and the Pacers win their fourth consecutive game?

On Feb. 24, 2021, the last time these teams met during the regular season, Golden State won 111-107. In other news, following the Warriors’ road loss to the 76ers on Saturday, guard Stephen Curry extended his own streak of hitting at least one three-pointer in 150 consecutive regular season games played. This is his second-longest three-point streak in the history of the league, and the only longer streak was his own 157-game record. This season, the two-time MVP is averaging 27.1 points, 5.6 rebounds and 6.3 assists per game. His three-point shooting percentage is also 40.4%.

Stephen Curry has now hit a three-pointer in 150 consecutive regular season games played, the second-longest three-point streak in NBA history behind only his own previous streak of 157 consecutive games.

All the Warriors’ veterans are expected to play in Indianapolis tomorrow, including Steph Curry and Draymond Green. Had been discussion of them resting, but they won’t.

Moreover, in the Warriors’ 102-93 road loss versus the 76ers on Saturday, guard Jordan Poole led his team in scoring, finishing with 23 points in 37 minutes played. Forward Andrew Wiggins ended his performance with 20 points, 4.0 rebounds and 4.0 assists in 37 minutes spent on the court. This was a not-so-great effort by the Warriors shooting-wise. The Sixers outscored them 32 to 20 in the fourth quarter.

In addition to Golden State having a total of 13 turnovers, they shot 34-for-85 (40%) from the field and 12-for-48 (25%) from behind the arc. Aside from a lackluster defensive showing, their missed three-point shots contributed the most to their third defeat on the road. Now, Golden State is 7-3 away, 14-2 at home and 6-4 ATS on the road this season.

Pertaining to ESPN’s Basketball Power Index, the Warriors have a 59.9% probability of winning.

Meanwhile, on Saturday, in the Pacers’ 106-93 home win over the Mavericks, guard Caris LeVert scored a team-high 26 points in 37 minutes of action. Forward Domantas Sabonis also added one more double-double to his career total, amassing 24 points, 10 rebounds and 7.0 assists in 35 minutes played. In the second quarter, the Pacers outscored the Mavs 34 to 28.

For useful betting trends, the Warriors are 12-5 ATS in their last 17 performances this season. Next, the team is 16-4 straight up in their past 20 matches versus the Pacers, and Golden State is 4-1 ATS in the team’s previous five contests at Gainbridge Fieldhouse. Not to mention, the Warriors are 6-1 ATS in their last seven matches against Eastern Conference opponents. Finally, the team is 9-0 SU in their past nine games versus Central Division opponents.

Interested betting on the Indiana team? – Don’t miss out on reading our guide about sports betting in Indiana first!

Pick the Warriors to win, they will cover the spread and the total will go over 213. Golden State is a three-point favorite on the road with BetUS.