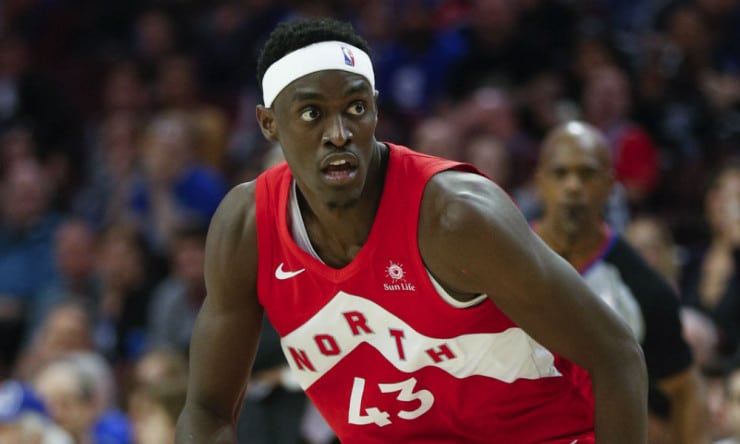 When people think superheroes, Batman is the one that comes to mind more often than not.

There’s a good reason for that: Despite not having any superpowers, the Caped Crusader always finds a way to win. Ironically, that’s what gives him the label as “super” to begin with. His intelligence and his resourcefulness come through for him to save the day — you know, as opposed to being an alien or being bitten by a radioactive spider.

But even the best of heroes still need a sidekick. Someone who can take some of the pressure off the alpha dog. A reliable second-in-command. Batman is a total boss and all, but he always needed Robin by his side to protect the citizens of Gotham City.

The presumption coming into last season was that Kyle Lowry would be the Robin to Leonard’s Batman during the Raptors’ playoff run, but Siakam’s drastic improvement — which is detailed more here — made him Robin while Lowry served more as Alfred the Butler. But now, Leonard is gone and, apparently, so were the Raptors’ hopes of repeating.

It seemed unrealistic to think with Toronto’s team now could be even remotely close to the juggernaut it was last season. Losing Leonard will do that to you, but there was a question worth asking: Could Pascal Siakam be the new Batman in Toronto?

It seemed like such an outrageously unfair demand out of someone that has already exceeded all possible expectations — and then some — since becoming a Raptor three years ago. With Leonard bolting for Los Angeles, Siakam has been forced to shoulder even more responsibility than anyone could have imagined on this day last year.

Back then, Siakam was a secret weapon who thrived playing next to one of the league’s elite players. Now that teams know a little more about the extent of his talents — and as the focal point of the offense — a drop off was to be expected both for the Raptors and Siakam’s efficiency.

Yet, the Raptors currently stand at 4-1. They have the NBA’s fifth-best net rating at plus-8.4. They have the league’s third-best point differential at plus-9.4. Even without Leonard, their defense is stingy enough that taking them on any given night will be a doozy.

Above everything else that’s gone right for them so far, Siakam has taken his role as the lead man and run with it. He’s currently averaging 28 points on 51/44/96 splits while also being second in overall net rating as the Raptors are plus-18.1 when Pascal is on the court. Any way you slice it, those are the numbers of a true superstar.

The law of averages says those numbers will come down more than a tad once we dive further into the season. Additionally, it’s only been five games and the Raptors have not faced the toughest schedule thus far. Their four wins came against the New Orleans Pelicans, Chicago Bulls, Orlando Magic and Detroit Pistons. But, should he continue at this rate, joining the 50-40-90 club would be an extremely exclusive honor. Still though, seeing Siakam do this wonderfully so far has to make Toronto feel optimistic about its future post-Leonard.

Offensively, Siakam’s evolution as an all-around scorer has got to be the most impressive among all of his improvements. Technically, his overall percentages — whether if it’s true shooting percentage, effective shooting percentage or just field goal percentage — are down, but that stems from Siakam both having a massive uptick in usage rate (20 percent to 32) while also enhancing himself as a threat from anywhere on the court.

Having much a more potent product on the offensive side of the ball requires improving an ability to stretch the floor. That doesn’t have to be only from three-point land, however — it can be from mid-range. According to Basketball-Reference, seven percent of Siakam’s shots this season have come between 10 and 16 feet compared to last season (five). On shots that were between 16 feet and inside the three-point line, nine percent of Pascal’s shots come from that area — whereas last year, it was a hair under two.

These have led to mixed results, as Siakam has shot almost 29 percent from between 10 and 16 feet while also shooting nearly 56 percent from between 16 feet and inside the three-point line. Those will probably even themselves out — again, the law of averages, people — but the point remains that he is slowly expanding his offensive repertoire.

Speaking of, there’s also Siakam’s improved ability to shoot the ball from deep. The recently-paid cornerstone shot the three-ball at a solid rate last year, shooting 36 percent from that area — but that came at only 2.7 attempts a game. In the five games he’s played this year, Siakam has averaged 5.5 three-point attempts a game on a remarkable 44 percent. Compare that to a ghastly 14.4 percent from distance during his rookie year and it’s just more evidence of how far he’s come.

But what really helps a young starlet transition from a valuable complementary piece to an all-out superstar is when he takes on the role of The Man.

The first of two essential elements in being The Man is how he does in isolation. Siakam’s role as Robin last year made it so that he didn’t have to go one-on-one with the league’s best. Since he virtually has no choice now, the fourth-year standout has been much more involved in ISO plays, in which he’s performed admirably.

According to NBA.com, Siakam’s isolates on 12.6 percent of his possessions. During those plays, he’s managed to score 3.2 points while shooting 55 percent from the field and having an effective field goal percentage of 59 percent. On those plays, he has a scoring frequency of 44 percent — tied for 11th among all players — while also owning an And-1 frequency percentage of six, tied for third-highest among players.

Overall, his play in isolation puts him in the 63rd percentile. That’s not elite, but that’s more than adequate for a guy basically in his first year on the job as The Man.

Finally, there are his abilities to step up in the clutch. Toronto hasn’t been in a lot of clutch situations, limited sample sizes and all, but there are a few telling statistics about Siakam in crunch time.

Siakam has averaged 4.7 points in clutch situations thus far — which puts him 16th among players — while shooting 55.6 percent from the field, per NBA.com. Siakam’s net rating is an awful minus-19.4 — their hard-fought loss to the Celtics in Boston probably had something to do with that — but the real eye-catcher is the 39.3 percent usage rate that he currently has.

Compared to the 13.7 percent usage rate he had in 2018-19 and it’s all the confirmation we need: Pascal Siakam is the Batman of these Toronto Raptors. No questions asked. All in all, Toronto will get a better understanding of their ceiling once they face off against the Milwaukee Bucks in a rematch of the Eastern Conference Finals tonight. If the Pascal Siakam we’ve seen so far is the one we’re going to be seeing for the rest of the season, then this litmus test is must-watch television.

Nobody was expecting him to play the part of the No. 2 option but that’s exactly what he did — that truly helped put the team over the top. Now that he’s expected to do even more, Siakam hasn’t disappointed in the slightest.

But when this season is over, Pascal Siakam may just be regarded as the hero that the city of Toronto both needed and deserved.