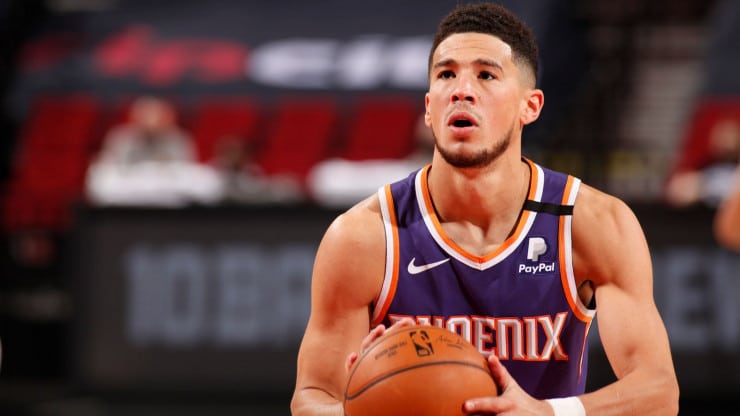 Another Tuesday night NBA slate is back with just four games on for fans to view  throughout the evening.  We’ve put together our best NBA player prop picks for tonight’s games featuring Brooklyn vs Philadelphia, Sacramento vs Memphis, and LA vs Phoenix.

At 7:30pm on TNT, the Brooklyn Nets will be on the road to face the Philadelphia 76ers. The Sixers will be without James Harden, Joel Embiid, and Tyrese Maxey tonight for their game. Brooklyn recently got SG Kyrie Irving back on Sunday night after his team issued suspension made him miss eight games.

Later in the evening at 10:00pm, the 5-10 LA Lakers will be in Phoenix to take on the 10-6 Suns. The Lakers have won three games in a row for the first time this season with Anthony Davis’ huge performances. Phoenix has cooled off after having a 6-1 start. NBA betting sites have the Suns at (+800) to win the Finals.

Kyrie Irving made his return to the Brooklyn Nets on Sunday night after missing eight straight games due to a team issued suspension. He’s played in nine of the teams 17 games this season and is averaging (25.4) points, (5.1) rebounds, (4.6) assists, and (1.3) steals per game. Irving is still trying to find that chemistry with his teammates. There’s no question that the Nets are better when he plays.

Our pick tonight is for Irving to have over 2.5 three-pointers @ +120 with BetOnline. Kyrie has averaged more three’s taken in the past two seasons than any time in his career. For his career he averages (5.8) three’s attempted per game. This season, he’s taking (8.9) three’s a game. The shots are there for Irving to take. He just needs to continue to find his rhythm and the baskets will start falling.

Back Irving over 2.5 three-pointers @ +120 With BetOnline

The Memphis Grizzlies are 10-7 this season and that is good enough to be first place in the Southwest Division. All-star PG Ja Morant (ankle) is doubtful to play vs the Kings tonight. In their game on Sunday without Ja Morant and Desmond Bane, another Grizzly had to step up and lead the team offensively. That was Dillon Brooks.

Our pick tonight is for Brooks to have over 22.5 points @ -110 with BetOnline. In their loss to the Nets on Sunday, Brooks became the primary scorer for his team and had 31 points in the game. He also took 11 three-pointers. Brooks is only averaging (16.9) points per game this season, but he’ll be asked to handle a lot of the scoring duties for Memphis while the team deals with injuries.

The Phoenix Suns are 10-6 this season and are first place in the Pacific Division. Leading the team in scoring this season is three-time all-star SG, Devin Booker. He’s averaging (27.6) points per game with (9.7) field goals made per game. His field goal percentage this season is also the third highest of his career.

Our pick for this game is Devin Booker to have over 2.5 three-pointers @ -106 with BetOnline. Booker is attempting (6.4) three-pointers per game this season, higher than his career average of (5.8) per game. The Suns are 2-3 in their last five games.

Back Booker over 2.5 three-pointers @ -106 With BetOnline
Join our Telegram channel for our exclusive free betting tips, picks and offers.