Gerald Beverly, a D-2 prospect from Daemen College, shined at the 2015 Elev8 Pro Day in Florida. Basketball Insiders caught up with him to discuss his crazy journey and what he’s hoping to prove during the pre-draft process.

Bobby Portis has an interesting pre-game ritual. Before every game, he has a very specific scenario he imagines. 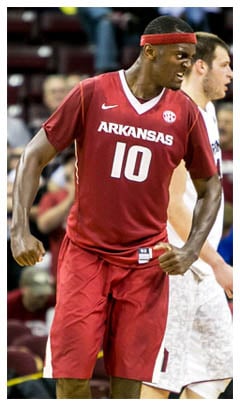 “I play mad,” Portis said. “I play very angry because when I’m sitting in the locker room before a game, I imagine my opponent slapped my Mom. That’s why I play mad. Now, I have to bring it to him because he slapped my Mom… I’ve created this thing that I do now where I get mad so I can go out there and have a productive night.”

Portis knows this is somewhat strange, telling reporters with a smile, “I am crazy.” But there’s no arguing with the results. His pre-game ritual certainly worked in college, as he averaged 17.5 points, 8.9 rebounds, 1.4 blocks and 1.1 steals as a sophomore at Arkansas. Not to mention, he shot extremely well from the field (53.6 percent) and three-point range (46.7 percent).

The 20-year-old power forward is an interesting and versatile prospect. He studies Kevin Garnett, trying to mimic aspects of Garnett’s game and, most notably, his intensity.

Throughout the pre-draft process, Portis has turned heads. A number of teams have worked out Portis (including the Detroit Pistons, Utah Jazz, Boston Celtics and Phoenix Suns among others), as they are intrigued and want to see more of the 20-year-old big man.

At the NBA Combine, he measured in at 6’10.5 and 246 pounds, with a 7’2 wingspan and he said he interviewed with 16 teams, including the Celtics, Cleveland Cavaliers, San Antonio Spurs, Dallas Mavericks, Memphis Grizzlies, Atlanta Hawks, Milwaukee Bucks and Indiana Pacers.

One thing that becomes apparent in talking to Portis is that he doesn’t lack confidence. When asked why a team should pick him, there’s no hesitation and he gives an amazing response.

“Because 18 to 19 years from now, when you look at the players in this draft, they’re going to say Bobby Portis [was] the best player in this draft,” Portis said confidently. “I think I’m one of the best kept secrets in the draft.”

And once that secret comes out, what will people discover about Portis?

“They’re going to say Bobby Portis is one of the hardest-working players in the whole NBA simply because once I get there, I won’t stop working,” Portis said. “I’m going to be myself from day one and keep doing the things that have gotten me here. [I won’t stop] simply because I was once a kid that nobody knew and now people know me. I’ve gotten to this position of talking to people like you because I’ve worked hard and I’m going to keep working hard once I get there because I want a career in the NBA, not just to get there.”

Portis could be drafted in the lottery or shortly after, as a number of teams are very interested in who he is as a player and as a person. He has two-way potential and could be extremely effective at the next level if put in the right situation. While it’s highly unlikely he fulfills his prophecy of becoming the best player in this draft, there’s no question he’s a talented player who could have a long, successful NBA career.

However, there have been some questions about Portis that he has had to address. Will he be more of a stretch four who can knock down shots from mid-range and, eventually, hit NBA three-pointers? Will he be more of a post player who does his work inside? Also, can he play some minutes at center or is he strictly a power forward?

Portis feels that he can develop into a dual-threat big man who can do a little bit of everything and play anywhere. He believes his versatility and ability to fill whatever role is asked of him is why teams are showing interest in his services. The ability to play multiple positions and be versatile on both ends of the floor is very important in today’s NBA, which helps the case for Portis.

“I bring a certain type of physicality to the game, and I bring an intensity to my teammates and I make them better,” Portis said. “My best skill on the court is my mid-range game and shooting, and also my post defense. I can contain guys and not let them get a good position on me. And I feel I can play with anyone. I can complement players well and make others better. With the passion and intensity that I play with, I bring something different to the basketball court that most 20-year-olds don’t bring. I bring a sense of urgency.”

Portis is certainly a name to keep an eye on come June 25. His floor is likely the Bucks at No. 17 (where three of our four Basketball Insiders draft analysts, including myself, had him going in our latest mock), although he could climb even higher, especially if teams have seen witnessed his intensity during workouts and liked what they saw.

It’s pretty rare to see a trade go down during the NBA Finals (usually teams wait until closer to the draft), but a deal between the Milwaukee Bucks and Detroit Pistons was agreed to today, according to Adrian Wojnarowski of Yahoo! Sports.

The Bucks will trade forward Ersan Ilyasova to the Pistons for forwards Caron Butler and Shawne Williams.

Milwaukee had been shopping Ilyasova for quite some time, so it’s no surprise to see him moved. Pistons president of basketball operations and head coach Stan Van Gundy loves shooters, and Ilyasova is a solid stretch-four who should complement center Andre Drummond well.

Butler and Williams each have a non-guaranteed salary for next season ($4,500,000 and $1,356,146, respectively), so this could just be a salary dump by Milwaukee. We’ll see if Butler and Williams actually remain with the Bucks or if they were acquired just to be waived.

Last season, Ilyasova averaged 11.5 points, shooting 47.2 percent from the field and 38.9 percent from three-point range.  His best seasons were 2011-12 and 2012-13 and he has declined a bit since then, but a change of scenery could be just what he needs to start producing at a high level again.

Forbes has released their annual list of the world’s top 100 highest-paid athletes. For those curious which NBA players made the list, check out this graphic below. Here is the complete list (for those interested). 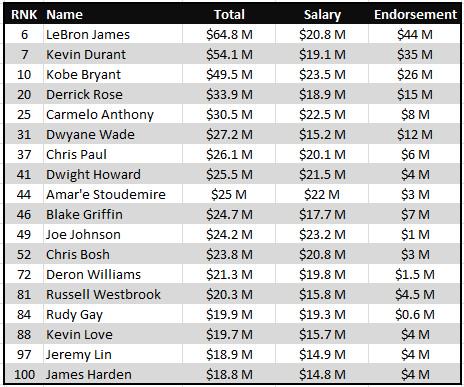 While the NBA Finals between the Cleveland Cavaliers and Golden State Warriors is obviously dominating headlines right now, the 2015 NBA Draft is right around the corner and Basketball Insiders has a ton of coverage for those of you who are interested. We understand that many fans are already in draft mode, so we have been pushing out a lot of draft content lately. Be sure to check out the following pieces:

For all of Basketball Insiders’ NBA Draft coverage, be sure to check out our site’s NBA Draft section every few days.