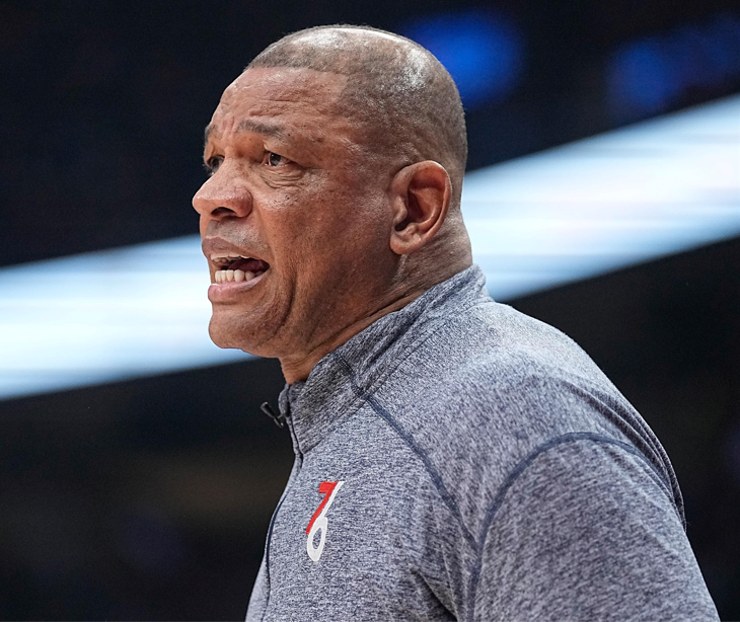 For one of the latest NBA rumors, the Lakers are not budging on 76ers coach Doc Rivers. The front office wants to sign the 23-year veteran coach. During a press conference, 76ers general manager Daryl Morey made it clear that Rivers’ future with the team is secure for the 2022-23 season. However, if Rivers wants out, what’s stopping him from leaving?

According to Mark Stein, the Lakers are continuing to pursue Doc Rivers. The team’s head coaching candidates list includes Terry Stotts, Kenny Atkinson and Darvin Ham. “One source close to the situation told me over the weekend that the list of coaches under consideration by the Lakers is still wider than the reported trio of Ham, Stotts and Atkinson,” explained Stein. This is one of the juiciest NBA rumors at the moment.

Additional NBA news, trade rumors and betting content is on the main page.

My latest on the Lakers' coaching search and why the choice has to be Darvin Ham … IF the Lakers, that is, end up choosing strictly from the three reported finalists: https://t.co/ICkSah7oqs

“Suspicions persist in league coaching circles that the Lakers have not completely abandoned hope that Philadelphia’s Doc Rivers becomes unexpectedly available, despite the recent insistence from Sixers president of basketball operations Daryl Morey that Rivers will be back in Philly next season.”

Furthermore, Rivers has three years, $24 million remaining on his current contract with the 76ers. The Lakers would have to offer the veteran coach something greater than a five-year, $40 million deal. Anything more than that seems like a highway robbery. It’s not to say that Rivers isn’t a decent coach, but he has not led a team to the conference finals since coaching the Celtics.

Not to mention, the Sixers have not advanced to the big dance since the 2000-01 season. Of course, the team went on to lose in five games against the Lakers in the 2001 NBA Finals. In four of the past five seasons, the 76ers have fallen short in the second round. Other NBA rumors are on the main page.

The Lakers could trade for Doc Rivers, just like the Clippers

Additionally, an NBA team can trade for a coach. Funny enough, Doc Rivers was the last coach in the four major sports leagues to be traded. In 2013, the Celtics traded him to the Clippers for a 2015 first-round draft pick. Rivers could become the first coach in NBA history to be traded twice. Stan Van Gundy was traded from the Heat to the Magic in 2007 for future second-round draft picks.

While a trade might not be in the cards for the veteran coach, never say never. It would make some Sixers fans happy. There is always a scapegoat year after year. It was Ben Simmons in 2021. Now, who else will the fans blame? Jokes aside, Rivers did everything he could this season. Joel Embiid met expectations against the Heat, especially considering he played through injuries.

Moreover, even if Lakers general manager Rob Pelinka wanted to offer Doc Rivers a large contract, he would have to worry about tampering. On Aug. 3, 2017, the Lakers were fined $500,000 by the league after Pelinka contacted Paul George’s agent. So, it would look bad on his part if he got caught twice. Per multiple sources, Pelinka is on the hot seat if Los Angeles has yet another disappointing season.

In the end, the Lakers will probably target Darvin Ham over the rest of the candidates. After all, he is the favorite to be named the team’s 28th head coach. LeBron James wants him. Though, Ham doesn’t have any head coaching experience. Rivers’ head coaching record is 1,043-735 (.587). His playoff record is 104-100 (.510). If a G.M. had to choose between Ham and Rivers, the latter is the better option.