When we think of the top point guards in the NBA, a relatively short list of names generally comes up. Depending on who you ask, Chris Paul, Stephen Curry, Russell Westbrook and John Wall tend to make the short list. After those four players is a large group of good-to-great point guards who make up the second-tier. Some names in that group arguably include (in no particular order) Mike Conley, Kyle Lowry, Kyrie Irving, Jeff Teague, Derrick Rose, Goran Dragic, Eric Bledsoe, Brandon Knight, Reggie Jackson, Ty Lawson, Ricky Rubio and Damian Lillard.

With the exception of Lawson, each player named so far is returning to their respective team this season, though Knight, Dragic and Jackson will be entering their first full season with their current teams. For the most part, these guards return to the same or a similar role to the ones they’ve held in the past. However, Lillard is entering a unique situation after a busy offseason for the Portland Trail Blazers.

After trading away Nicolas Batum and losing LaMarcus Alrdidge, Wesley Matthews, Robin Lopez and Arron Afflalo in free agency, general manager Neil Olshey began the process of rebuilding his team around Lillard. Lillard spent the first few years of his career playing alongside several veteran impact players, but now will likely start next to Gerald Henderson, Al-Farouq Aminu, Ed Davis and Mason Plumlee. It’s possible that starting lineup changes throughout the season, but it just goes to show how much roster turnover there was in Portland this summer.

So with almost all of his veteran teammates gone and Lillard now surrounded by complementary players, the question is what should we expect from Lillard this season?

In a recent interview with our Alex Kennedy, Portland guard C.J. McCollum gave his opinion on what he expects from Lillard.

“I just expect him to continue to do a lot of the things he has done in the past: being a good leader, orchestrating the offense, being aggressive like he has been and just being a killer,” McCollum said of Lillard. “I always joke with him and tell him this is just like when he was at Weber State only he’s got more help. He’s going to take on the bulk load of attention from an in-game standpoint and a media standpoint so a lot of pressure is going to be on him, but I think he’s ready for it. Offensively, he has all the tools to be an All-Star again….”

Olshey fully committed to building his team back up with young players who could grow together, with Lillard as the clear focal point. The oldest player on the team now is center Chris Kaman (33), who is entering his 13th season in the league. Henderson has the second-most NBA experience, as he is entering his seventh season in the NBA.

The Trail Blazers no longer have a stable of veterans or the continuity that made them such an effective team in recent years. The team is now made up of mostly complementary type players that have either never been a focal point, or, in the case of Kaman, are years removed from that role. As McCollum stated, this means that the bulk of the offense will run through Lillard, which wasn’t always the case considering the Blazers have preferred to pass the ball around in search of open three-pointers and would often dump the ball to Aldridge for iso-scoring opportunities.

With Aldridge gone and so many new faces in town, Lillard will likely try to do more on offense this season. It’s not clear how exactly Lillard will handle this increased role, but here are some things to consider.

First, as Jacob Rosen pointed out in this piece for Nylon Calculus, throughout his career, Lillard has a 29.3 usage percent while playing without Aldridge on the floor, which is nearly six percentage points higher than his career average with Aldridge. Here is Rosen’s chart to break down the difference in each player’s production in relation to one another.

What we see, regarding Lillard, is that his true shooting percentage and assist rate dips ever so slightly without Aldridge, but his scoring increases significantly. Again, without Aldridge and other established veterans to share the ball with, Lillard’s scoring will surely increase, as we can deduce from this data. Everyone knows at this point that Lillard can score the ball with the best of them, but Lillard has fallen short of the top-echelon of point guards for, among other reasons, the role he has played within the team’s system.

This may seem odd considering that Lillard has been, at least, Portland’s number two option on offense for the last two seasons and frequently has the ball in his hands. However, Lillard ranked just 25th among point guards in Nylon Calculus’ True Usage statistic (which is an estimate of the percentage of offensive plays on which a player contributes to the end results while he is on the floor). This means that players like Michael Cater-Williams, Dennis Schroder, Tony Wroten, Mo Williams, Brandon Jennings and Ish Smith among others were more involved offensively while on the court for their respective teams than Lillard was last season. Part of this has to do with the fact that Lillard likes to play off the ball at times, but it seems that Lillard’s offensive contributions up to this point have been somewhat limited because of the Blazers’ emphasis on ball movement and his own willingness to integrate himself as a cog of that system, rather than trying to be its engine (like Westbrook did last season for the Thunder in the absence of Kevin Durant).

What may be most interesting to watch is how effectively Lillard can facilitate the Blazers’ offense and distribute the ball to his young teammates. Consider what Lillard told Kirk Goldsberry of Grantland in January: “Three points are more than two. Every time I get in the paint, I’m looking for Wes or Nico, because they shoot so well from beyond the line.”

Well, now when Lillard gets into the paint, instead of having Matthews and Batum to pass to on the perimeter, he will have some combination of Henderson, Aminu, McCollum, Maurice Harkless or Allen Crabbe. Will Lillard be less inclined to look for the open man now that the best three-point shooter he has to pass to now is arguably McCollum? To be fair, McCollum has shot well from distance, but he’s no Matthews and he may be backing up Lillard at point guard rather than playing with him at shooting guard.

In addition, Lillard has made big strides as a finisher around the rim since the 2013-14 season, so he may be more inclined to try and score on his drives more than in the past considering the loss of Matthews and Batum on the perimeter. Here are Lillard’s shooting charts over the last two seasons to show just how much he has improved in this particular area. 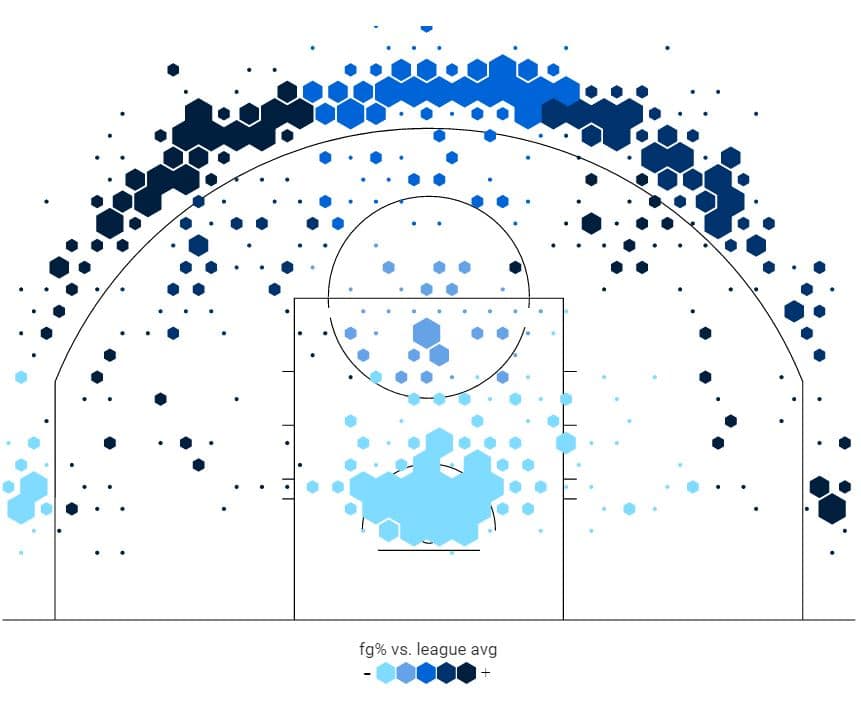 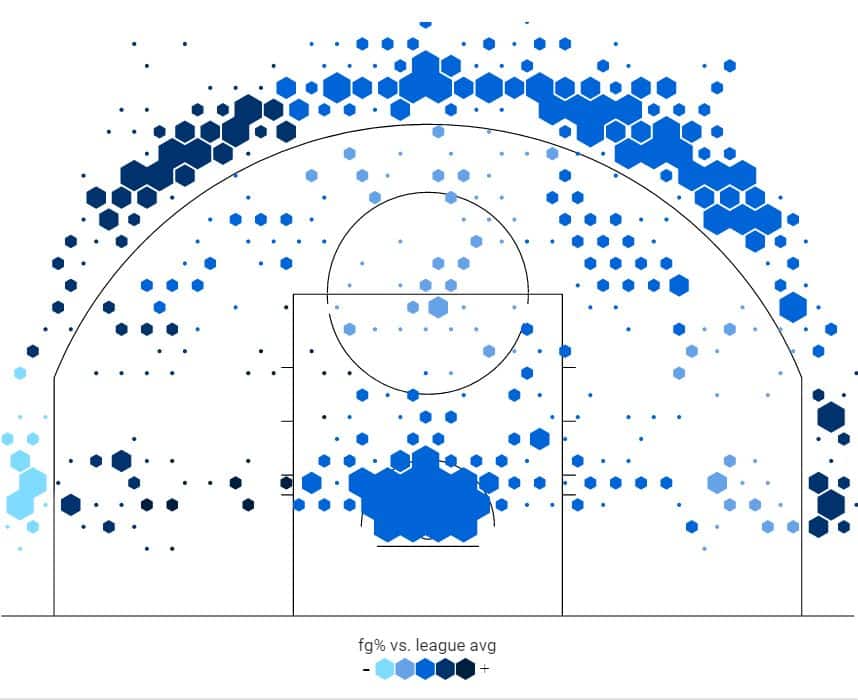 In addition, Lillard will no longer have Aldridge to dish the ball to for an easy mid-range jumper out of the pick-and-roll, which eliminates another means to easy assists for Lillard. This could spell trouble for Lillard as a distributor considering that even with all those weapons last season, Lillard registered a meager 16.2 playmaking usage percentage, according to Nylon Calculus, which ranks below players like Mo Williams, Donald Sloan, Jameer Nelson and Steve Blake among others and is nowhere near players like Paul (25.6), Wall (25.5) or Lawson (25).

We know that Lillard will almost certainly increase his scoring output this season, but whether he is able to improve his standing as a playmaker and overall floor general remains to be seen. But more than anything, it will be interesting to see if Lillard is able to make any progress on the defensive end of the floor. Lillard has been ineffective as a defender throughout his short career, and was ranked 30th among all qualified point guards in ESPN’s Defensive Real Plus-Minus statistic last season (-0.37). Defense is the biggest hole in Lillard’s game at this point, but he has proven in the past that he is willing to work hard to turn his weaknesses into strengths (like his ability to finish at the rim). And at least one of Lillard’s teammates thinks he will show significant defensive development this season.

“I think where he will make strides this year is defensively – just continuing to understand the importance of defense and the importance of guarding pick and rolls,” McCollum told Basketball Insiders. “I think it starts with him and it finishes with the rest of us because we follow his lead. I look forward to the opportunity to play alongside him and I think he’ll have a tremendous year. He’s ready. He looks like he’s in great shape, his jumper looks good, he looks sharp and I think he’s focused.”

We know that Lillard will still be able to drop his step-back three-pointers, attack the rim effectively and establish himself as the centerpiece of the Blazers’ offense. What is less clear is how well Lillard will be able to distribute the ball on a team that features so many young, unproven players, and whether he will show real improvement defensively.

Lillard has a strong footing in the second-tier of NBA point guards, but with Aldridge gone and a larger role waiting for him this season, Lillard has the chance to prove he belongs in the discussion with the best of the best. Making the jump into that short list will require more than just scoring, however. Considering the strides Lillard has made throughout his career, his track record of responding to his doubters and stepping up to major challenges, my prediction is that Lillard will put together his best individual season yet.